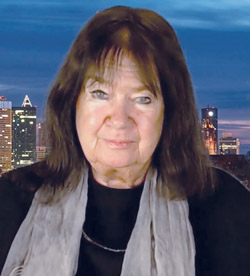 Dec. 3 (EIRNS)–The following is a transcript, done by EIR, of the Thursday, Dec. 2, 2021 broadcast on CGTN of “Dialogue,” with Helga Zepp-LaRouche as a guest.

XU QINDUO: [recording starts in progress] … achieved over the past eight years, what are the concerns behind it, and how does it embody Green development? To discuss these issues and more for the first part of the program, I’m joined by Shiran Illanperuma, research analyst at Econsult Asia, and Helga Zepp-LaRouche, founder and president of the Schiller Institute. For the second part of the program, I’ll also be joined by Erik Solheim, president of the Green Belt and Road Institute. That’s our topic; I’m Xu Qinduo.

Welcome to the show, Helga. For starters, how do you evaluate China’s Belt and Road Initiative, the BRI, over the past eight years?

HELGA ZEPP-LAROUCHE: I think it has changed the world for the better. It is historically the largest infrastructure project ever undertaken in the history of mankind. I think with all the attacks on it recently, there is a very good way of looking at it, and that is to imagine that it would not exist. Just imagine if Xi Jinping would not have announced the New Silk Road and the Maritime Silk Road and all these projects would not have been undertaken. The world would be in a much worse situation. You would have much more poverty; the pandemic would still be here. However, the developing countries would not have received a lot of help from China, because it was this civilizational contribution by China to first lift its own population — 850 million people — out of poverty. And then have the economic strength to offer to the developing countries the model and offering them to do likewise by applying the same economic principles. So, I think the world has changed for the better in ways it never has happened in history before, and I think this will be recognized eventually by everybody; including those people who don’t seem to be so happy with the existence of the Belt and Road Initiative, because they will recognize in the coming period, which will be characterized by more upheavals, inflation, even a hyperinflation in the Western liberal system. You will have new waves of the pandemic because these other countries did not manage as well as China to deal with it. And in the end, it will be clear that the cooperation with the Belt and Road Initiative is really the savior of civilization.

SHIRAN ILLANPERUMA: Yes, I would definitely agree, especially coming from Sri Lanka, which is situated in the Indian Ocean very strategically close to some of the busiest shipping lines in the world. For example, the Hambantota Port, which was an investment from China, is situated just ten nautical miles off the shipping route. So, building that regional connectivity is really beneficial for Sri Lanka, as well as for its neighbors.

XU: Helga, the China-Laos Railway constructed in the BRI is the first international railway mainly funded and constructed by China, directly connected with the Chinese railway network after the proposal of the BRI in 2013. So, how significant is it to Laos? And how important is it to the BRI?

ZEPP-LAROUCHE: I think this is one of the most exciting projects I know of, because Laos has so far not been a very developed country. And by having a high-speed railway connecting Kunming with first Laos, but then beyond that to Singapore, Thailand. This connects ASEAN with China; it opens up the connectivity for Laos for eventually the entire Belt and Road infrastructure. Also, it’s not just a railway, even so it is very exciting and it will be very high-level technologically. But infrastructure corridors which always develop out of such transport lines open up the potential for the real industrialization of the country. So, I think this is a major breakthrough, and I think given the rather desolate condition of the railway system in the United States and Europe, I think people will go to Laos and Laos can be proud of having such a modern system, which will be a shining example for many other countries around the world.

XU: Shiran, you talked about the Hambantota Port. In 2017, Sri Lanka and China signed this deal with the leasing of Hambantota. Then there were criticisms — mostly from Western media — that Sri Lanka was forced into the deal, afterwards it was lured into a “debt trap” with easy access to Chinese money. What do you make of that criticism?

ILLANPERUMA: I think it’s nonsense, basically. The facts speak for themselves. Unfortunately, this narrative has been forward as you say by the Western media. But not just Western media. It has been picked up locally as well, whether it’s politicized or deliberate misinformation, that’s another topic. But if you just look at the facts, only 10% of Sri Lanka’s debt is to China; 50% is to international sovereign bonds, most of which are held by US banks and financial institutions. We have the same amount of debt to China as we do to Japan or the ADB, but nobody says we have a Japanese of ADB debt trap. So, that’s one thing.

Then, on the other hand, if you look at the facts of the case, Sri Lanka never actually defaulted on the loan that it took for the Hambantota Port. What happened was that in 2017 there was a huge balance of payments crisis, which forced the government to go to the IMF and then later it disinvested from Hambantota Port. But as you said, that was a 99-year lease that was given to a Chinese company, and we got an infusion of US$1 billion for that; something around that amount. That was not used to settle debt or anything like that. It was used to buffer our reserves. So, there was no debt default, there was no debt [ inaudible ] or anything of the sort.

XU: One thing is like a prominent feature of building infrastructure — it’s long-term. And also, it takes a long time to see positive results; usually like you are building a road, when does your return come back? It takes years, right? If you look at this Hambantota Port, experts say, “The Chinese-built Hambantota Port is expected to create 200,000 jobs and contribute $11.8 billion to the Sri Lankan GDP per year.” How do you evaluate the potential of the port?

ILLANPERUMA: As you said, the potential is huge. And it’s not just the port, because the port is kind of a catalyst for a lot of other things. Sri Lanka has traditionally lagged a bit behind in terms of manufacturing. The port has an industrial park adjacent to it which is also operated as part of the port. So far, there has been investments of $300 million into a tire factory; there’s been a plug-and-play electronics manufacturing factory; there have been deals signed for ship building, yacht building specifically. So, there’s a lot of potential to create jobs, and for Sri Lanka to improve its exports. Because of the way it’s situated in Hambantota Port, there is a lot of agricultural land as well as land that can be used for industrial investments. So, the potential is quite huge, and already I can tell you that there are a lot of locals who are employed there in the RO-RO facilities at the Hambantota Port. So, that’s quite a lot of potential for Sri Lanka to improve its exports, its regional connectivity, and tap into global value chains.

XU: There’s a criticism for Chinese, they say there is a lack of transparency and it’s increasing Chinese influence, or even Chinese military influence. So, what’s your response to that, Helga?

ZEPP-LAROUCHE: The argument that it’s just to increase the military influence is sort of ridiculous, given the fact that the United States has about 1000 bases around the world, and China has a meager one or two. But I think more important is not to just look at the label. I think what’s behind it is an ideological difference. I think this has been expressed most clearly by the head of the World Economic Forum, Klaus Schwab, who in his new book, Stakeholder Capitalism, says the famous sentence that “The real problem is overcoming poverty, because that desire to overcome poverty is what causes the climate catastrophe.” So, for these people, real development is the problem, because it supposedly according to their wrong science, damages the planet by causing climate change. Which is obviously completely wrong. What China is doing, look at what happened at the FOCAC meeting where China again for the I don’t know how many times, is forgiving the debt to the least developed countries. That has not been done by the countries of the Paris club likewise. But I think this ideological question that that there is a Malthusian faction who do not want the developing countries to develop. I think that has been left out of the discussion so far, but without recognizing that that is the motive, and it’s in the old tradition of Malthus, of the British Empire. It’s the same philosophy as what was behind the Opium Wars, or what was behind the British policies in India, and Africa for that matter. Nothing has changed in terms of this colonial outlook, which is the idea that the developing countries should stay undeveloped and be just the reservoir for raw materials for the rich countries.

If you look at the behavior during the pandemic right now, where the rich countries were hoarding vaccines, they were not trying to distribute masks and other medical supplies. We have now the result of that in the form of the pandemic spreading with omicron and mutations which are the result that you cannot leave pockets of the world without medical help. Then you get that as a result. So, I think we have reached a point where we need a complete change of the system. I think the model China has offered so far is the best available on the planet.