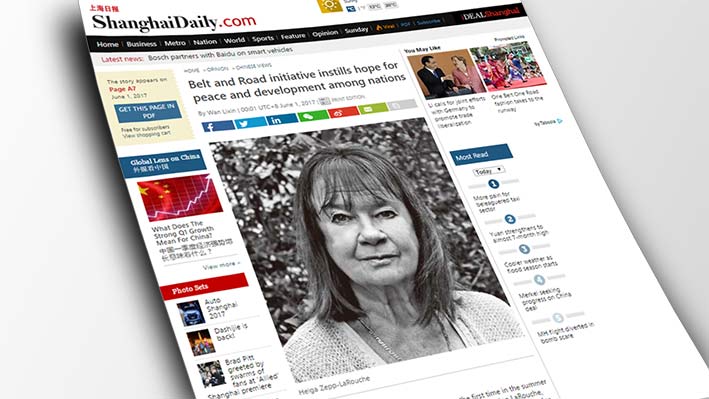 EDITOR’S Note: Helga Zepp-LaRouche visited Shanghai for the first time in the summer of 1971. In 1977 she married American economist Lyndon LaRouche, and the couple have since worked together on development plans for a just new world economic order. Zepp-LaRouche founded the Schiller Institute in 1984, a think tank devoted to the realization of these plans and a renaissance and a dialogue of classical cultures. In 1991 she was a coauthor of a study The Eurasian Land-Bridge/ The New Silk Road and in 2014 of the study The New Silk Road Becomes the World Land-Bridge, which has been translated into Chinese, Arabic, German and Korean. She is an expert in European humanist philosophy and poetry, Confucius, and history. After attending the recent Belt and Road Forum in Beijing, she visited Shanghai, where Shanghai Daily reporter Wan Lixin interviewed her.

Q: In what way do you think the Belt and Road initiative is significant for the world and China?

A: I think the Belt and Road initiative signifies a revolutionary move to a new epoch of civilization. The idea of having a win-win cooperation among nations is the first time that a concrete concept has been offered to overcome geopolitics. Since geopolitics was the cause of the two world wars, I think it is a completely new paradigm of thinking where an idea proposed by one country has the national interest basically in coherence with the interests of humanity as a whole. This has never happened. This has instilled tremendous hope among developing nations that they have the chance to overcome poverty and underdevelopment. And I think this is an initiative that will grow until all the continents are connected through infrastructure and development.

Q: What do you think are challenges confronting the world today?

A: I think the biggest challenge is that the trans-Atlantic financial system is in jeopardy, because the G7 countries did nothing after the financial crisis of 2008 to remedy the root causes of this crisis. The danger today is that we are going to have another financial crisis much worse than that of 2008. In this light I think the financial system associated with the Belt and Road Initiative, like the AIIB (Asian Infrastructure Investment Bank) and similar institutions, which are focused on investment in the real economy, are an anchor. Hopefully the Western nations will rethink their orientation of high risk speculation and eventually go back to the banking system represented by AIIB. U.S. President Trump announced that he will go back to the American economic system of Alexander Hamilton, and that’s potentially the kind of reform that makes the United States fit to cooperate in this new financial system. The second challenge is naturally terrorism. This requires international cooperation, and there I think the Belt and Road could offer a lasting solution by extending the initiative to Southwest Asia, and build up the economy in that part of the world that had been destroyed by wars which were based on lies. Why did you have to solve the problem of terrorism militarily first? You have to have an economic perspective so that people in the regions have hope for the future. So I think ending terrorism would require the Belt and Road Initiative and the reconstruction of the Southwest Asia and Africa.

Q: There has been evolving perception about globalization. How do you think the Belt and Road Initiative is reshaping this perception?

A: The old globalization really went entirely in one direction. First of all it made the deregulation of the markets and high risk speculation easy. And this increased the gap between the rich and the poor in an intolerable way in many countries. This mode of globalization is being rejected, as you can see by the Brexit and the rise of many right-wing movements in Europe. So this model has clearly failed. I think the new Silk Road, the win-win cooperation as proposed by China, has developed in incredible speed in the less than four years since President Xi proposed it. This new model of globalization is based on the common good of all participating countries. This is the more attractive form of globalization and this is why so many countries have joined it.

Q: What do you think are some of the factors that need to be considered when it comes to implementing the Belt and Road initiative across different cultures?

A: The Schiller Institute has organized hundreds of seminars and conferences on the New Silk Road for 26 years. We have always made the point that for this New Silk Road to succeed in the tradition of the old Silk Road, which was also an exchange of ideas and cultures, not just products and technology, you have to combine economic cooperation with dialogue between cultures. This dialogue must be on the highest level, so each culture has to present examples of the best of their culture, like Confucianism, Italian renaissance, the German classical period, and present the best works of arts in music and poetry, paintings and other forms of art. Our experience is that when people get into contact for the first time with expression of such high culture from another culture, they are surprised by its beauty. And this beauty then opens the heart and souls of the people. And this is the best medicine against chauvinism, xenophobia, and prejudice, and it opens the way for the love of other cultures. This is in conformity with Confucian teaching that all activity must be combined with strengthening of love for the mankind, because without that cultural component, that New Silk Road will not flourish.

Q: What do you think such high profile events like the recent summit suggest about China’s role in world affairs?

A: I think it a great honor for me to participate in this Belt and Road Forum, and I was deeply impressed by the speech of President Xi Jinping. Among all participants I spoke with there is consensus that we are actively participating in the shaping of history. All this means that China is right now leading the world in terms of providing the perspective for the future. I think this has been recognized by many countries in Latin America, in Africa, in Asia, and even some European countries start to recognize it is in their best interests to ally with that initiative. So I think it has made clear that China is the only country right now that offers a positive perspective to overcome the strategic bottleneck of our present times.

Q: In the past, the quest for prosperity invariably led to competition, strife, or wars. Is this avoidable?

A: Concerning the question of competition, strife and war, I think this must be replaced by joint development. Here I would like to quote from Pope Paul VI who said that “Development is the new name for peace.”

Q: How do you think the West responds to the Belt and Road Initiative?

A: The responses have been mixed, because you have those who want to stick to the old geopolitical thinking, to the status quo of their power, and to their understanding of their power position. I think this is an outdated way of thinking. Many think-tanks of the West are still publishing reports along these lines. But there is a wind of change. Many European countries have realized the potential of collaborating with the Belt and Road, which includes Greece, Serbia, Hungary, Slovenia, Czech Republic, Italy, Spain, Portugal, and Switzerland. So I think this tendency will increase. Those countries which are more reserved — like Germany — will have to change. But I think German industries, particularly those middle-sized industries, are absolutely in cooperation with China in the Belt and Road Initiative.

Q: Say something about your China experience.

A: I was first in Shanghai 46 years ago in 1971, after traveling on a cargo ship. Although it was not the best time to be in China, it had awakened my love for China. The city has changed completely. Except for some buildings on the Bund, I couldn’t find anything in my memory. I could not think of any other countries in the planet that have seen such gigantic changes. I think the Chinese people are much too modest. They should feel more confident about what they have accomplished. They have created the biggest miracle of the world, even bigger than the post-war German economic miracle. They should be very proud to be Chinese. The decision by Moody’s Investors Service to cut China’s sovereign ratings is insane. In German we have a saying: People should touch their own nose first before they made a stupid criticism.