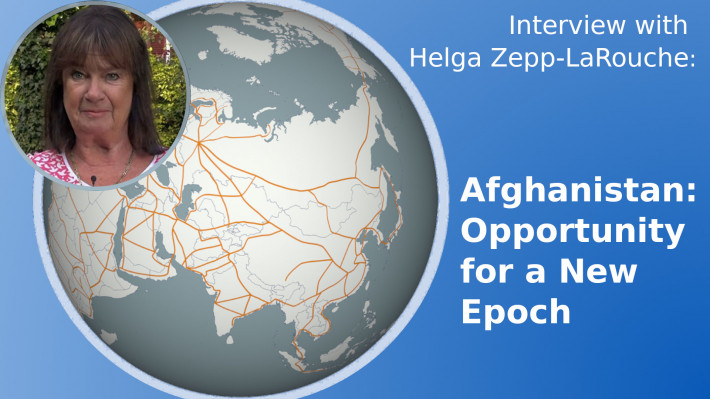 The dramatic developments surrounding the Taliban takeover of Kabul expose the failure of this regime-change war, and the previous ones since WWII. The war was wrong from the beginning, as the continuing investigation by the 9/11 families into who was responsible for the September 11, 2001 attacks are uncovering, and as Lyndon LaRouche warned that day, but more needs to be done. And there was never a viable war plan.

Some western political leaders are reacting thoughtfully. German CDU chancellor candidate Armin Laschet stated that this was the biggest failure of NATO, ever. Danish Foreign Minister Jeppe Kofod called for reflection and soul-searching. Helga Zepp-LaRouche pointed out the special responsibility that the U.S. has, in President John Quincy Adams’ words, to not go abroad, in search of monsters to destroy.

Now, as presented in the July 31, 2021 Schiller Institute video conference, “Afghanistan: A Turning Point in History after the Failed Regime-Change Era,” there is a potential for a new era of real nation-building in Afghanistan, and the rest of the world, if the Western nations cooperate with the Chinese-led Belt and Road Initiative, along with Afghanistan’s neighbors, and drop their geopolitical goals of preventing China and Russia from playing leading roles in the world. Many Afghan development plans are already on the drawing boards, and there is great humanitarian need, starting with building a modern health system, other infrastructure and agricultural alternatives to opium production. There will be great pressure on the Taliban from the outside, with offers of economic development contingent upon how they act.

Afghanistan: A Turning Point in History After the Failed Regime-Change Era

On the 50th Anniversary of LaRouche’s Stunning Forecast of August 15, 1971: So, Are You Finally Willing to Learn Economics?