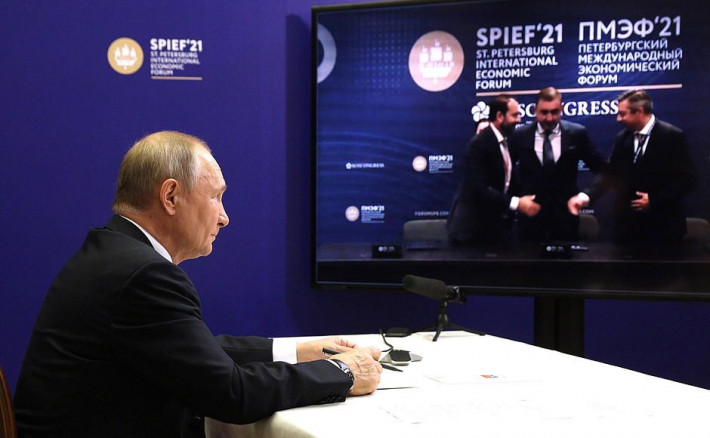 Today’s St. Petersburg Forum Russia-Latin America panel made clear that the potential for the expansion of economic ties between those countries “is huge,” because Russia proved itself a reliable partner in securing vaccine supplies and production for the region. Vaccine cooperation, prospects for increasing trade and investment flows, bilaterally and with the Eurasian Economic Union (EAEU), and the possibility of doing so without using the dollar, dominated the discussion.

High-level ministry officials from Chile, Argentina, Mexico, Guatemala, Guyana, and Venezuela, the Secretary General of the Andean Community (of Bolivia, Colombia, Ecuador, and Peru), the President of the Central American Parliament, and the head of the leading Brazilian pharmaceutical company, Uniao Quimica, were the speakers scheduled from the Ibero-American side.

Sergei Glazyev, Minister for Integration and Macroeconomics of the Eurasian Economic Commission, dominated the panel discussion from the Russian side. He was joined by the head of Russia’s Federal Service for Veterinary and Phytosanitary Surveillance (Rosselkhoznadzor) and the panel’s excellent moderator, Sergey Brilev, knowledgeable about both sides as the anchor of the “Vesti v subbotu” program on TV Channel “Russia” and head of the Bering-Bellingshausen Institute for the Americas in Uruguay.

Uniao Quimica head Fernando De Castro Marques reported that production of Sputnik V in Brazil is underway. UQ has produced its first batch, and once it clears the Russian Gamaleya Institute’s quality checks, it will start producing 8 million Sputnik V doses per month—for both Brazil and its Ibero-American neighbors. Between the Brazilian-produced Sputnik doses and 100 million vaccine doses imported from China and India, he said Brazil could have 70% of its people vaccinated by the end of this year—while exporting vaccines to the region, he emphasized.

Guatemalan Minister of Economics Roberto Antonio Malouf Morales jumped: how long did you say it will take to produce 8 million doses? One month! Guatemala has eight million people! We have suffered a 15% drop in our economy in the pandemic; with those vaccines we can recover faster!

Malouf Morales, Chile’s Vice Minister of Foreign Affairs for International Economic Relations Rodrigo Yanez Benitez, and Andean Community head Jorge Hernando Pedraza Gutierrez, all spoke of working out trade agreements with the EAEU. The Guatemalan and Chilean officials specified that they want to expand economic relations with Armenia and, yes, Belarus, through the EAEU, of which both are members.

Both noted that they had met separately with Sergey Glazyev before the panel. More than any details, the scope of the EAEU discussions in the region was best indicated by the Guatemalan Minister’s statement that if you say “Sergey” in Ibero-America today, everyone knows whom you are talking about.

The MOU’s being signed between Ibero-America and the EAEU reflect the restructuring towards a polycentric world underway, Glazyev said, but the question is how to turn them into actual business. He raised, in some detail, the need to create mechanisms to carry out this trade outside the U.S. dollar, “which has become toxic for us.” His remarks made clear that discussions are underway both nationally and at the level of businesses, of how to create a digital currency for trade between the EAEU and Ibero-America.