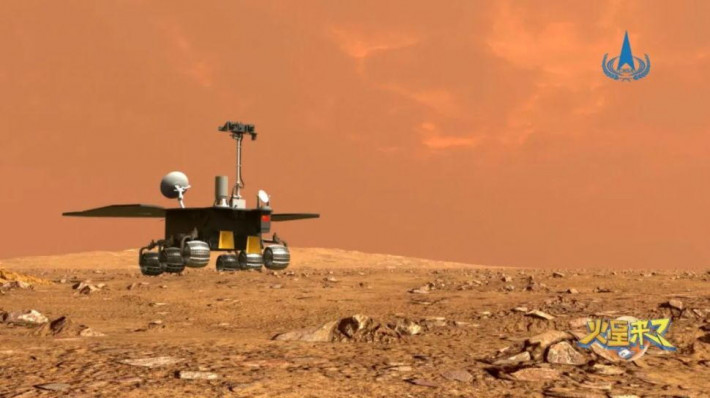 May 18 (EIRNS)—At Monday’s Foreign Ministry briefing, spokesman Zhao Lijian responded to a comment about the fact that NASA and Russia had congratulated China for landing its first rover on Mars, with a report about the many congratulations it had received from many other countries around the globe. He also referenced President Xi Jinping’s congratulatory message which pointed out that the Mars landing marked an important step in China’s interstellar exploration–from the exploration of the Earth-Moon system to interplanetary exploration.

In very poetic language, reminiscent of western myth of Prometheus giving fire to mankind, Zhou then said: “The Chinese people have a long-cherished space dream. From Shenzhou, Chang’e and Yutu to Tiangong and Tianwen, these beautiful names are the crystallization of their infinite longing for the distant stars and unknown space. The Mars rover of Tianwen-1 is named Zhurong after the god of fire in ancient Chinese mythology. Fire brought warmth and brightness to the ancestors of humankind, and fire lit up human civilization. Naming China’s first Mars rover after the god of fire signifies igniting the flame of China’s inter-planetary exploration, inspiring those working in this field to surpass themselves and pursue space dreams.

“The universe is also a dream for all humankind. China has always committed itself to peaceful use of space, carried out relevant international exchange and cooperation and shared outcomes in space exploration. With the spirit of seeking benefits for all mankind, China will continue to advance international cooperation in an open and inclusive manner and make greater contributions to the lofty cause of exploring the mysteries of the universe and promoting peace and development for mankind.” (His full remarks are here.)

Compare this beautiful explanation to the pathetic commentary from that NATO outpost in the U.S., the Atlantic Council, in the Fast Thinking daily nuggets it puts out, today entitled, “Mars With Chinese Characteristics.” What does China’s achievement on Mars “mean for the great-power space race?” it asks. “What are the military implications?” It then consults one of its “space experts” who pontificates that Beijing will “continue to challenge U.S. superiority” in space, and warns that if China “pioneers activity beyond low-Earth orbit…the trajectory of U.S. security and prosperity in space comes into question,” calling for the US to lead a NATO-style force into space. (The entire Fast Thinking daily item is here.)