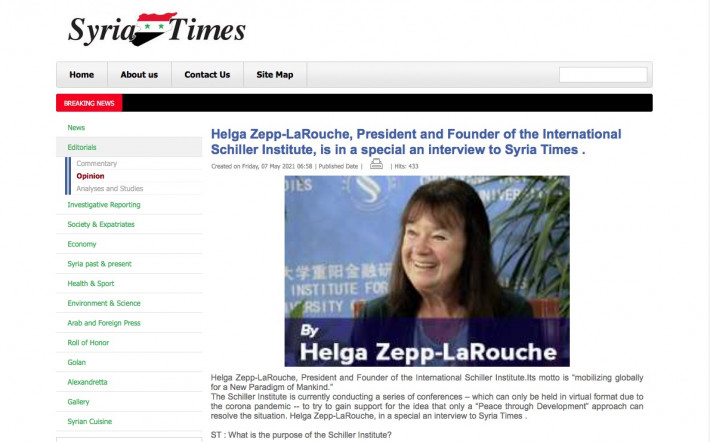 May 7 (EIRNS)–The Syria Times on May 7th published an interview with Helga Zepp-LaRouche with a very nice picture of a smiling Helga.  In replies to three main questions, she was able to explain her reasons for founding the Schiller Institute and the role it had been playing to develop programs for a just, new world economic order and to promote a worldwide renaissance of classical culture based on a dialogue of civilizations. In that context, the Institute has developed policies for various parts of the world, including Southwest Asia. She underlined her husband’s original “Oasis Plan” and the more recent “Phoenix Plan” for rebuilding Syria. She also attacked U.S. Middle East policy since the Bush Administration. She highlighted the upcoming conference on Saturday which would also have a presentation by Dr.. Bouthaini Shaaban from Syria, an adviser to President Assad. The full coverage is here.