An Underprepared India Is Teetering Under Covid-19’s Second Attack 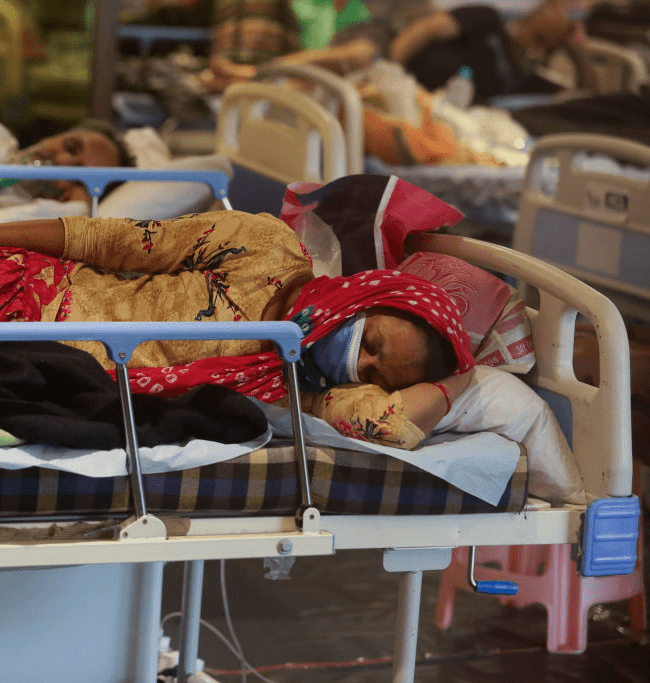 An Underprepared India Is Teetering Under Covid-19’s Second Attack

May 5 (EIRNS)—Having withstood the first wave of the Covid-19 attack in 2020 rather commendably, India’s Modi administration declared “victory” and virtually ignored the threat waiting around the corner — the second wave of the virus attack. India is now paying dearly with lives and general chaos caused by global pandemic.

On May 4, WHO figures indicated India accounted for nearly half of the COVID-19 cases reported worldwide in the past week. The WHO said in its weekly epidemiological report that India accounted for 46% of global cases and 25% of global deaths reported in the past week. New daily infections in the country numbered 382,315 on May 5, health ministry data showed, the 14th straight day of more than 300,000 cases. Officially, India has reported more than 3,500 deaths every day throughout the last week.

On May 4, Allahabad High Court (AHC) in Uttar Pradesh observed that the death of Covid-19 patients just because of the lack of oxygen in hospitals, which is widespread throughout the country, is a criminal act and is “no less than a genocide.” The AHC stated that the authorities- in-power are responsible for not taking measures to ensure maintenance of the oxygen supply chain.

In January-February of this year, the first wave of Covid-19 had waned in India and the official numbers showed a 90 percent drop from the peak of 96,000 per day in September 2020. The daily death toll dropped from 1,200 to 80. A sense of triumphalism began to emerge, led by a pack of cheerleaders close to Prime Minister Modi who unleashed vigorous political campaigns in five states going to the polls in March-April. On February 21, the senior leaders of the ruling party, BJP, thanked Prime Minister Modi for his “visionary leadership” that effectively weathered the Covid attack. Addressing the annual conference of Delhi Medical Association on March 7, Modi’s Health Minister Dr. Harsh Vardhan triumphantly declared : “We are in the end game of the Covid-19 pandemic in India.”

By April 4, the second wave of Copvid-19 attack became evident, when daily new cases exceeded the peak load of September 2020. Other than banning exports of vaccines at the end of March, the Modi administration did not take any new measure to either ramp up vaccine production or the production and supply chain of oxygen. Foreign vaccine developers that applied for authorization were told to carry out bridging trials that would take a few months before emergency use authorization could be given. The dam broke loose in mid-April.

It became evident on April 15 that India’s fragile health infrastructure, under the second attack of Covid-19, had collapsed. Oxygen shortages were causing deaths at hospitals throughout India and the vaccination rates dropped from about 3.5 million jabs a day to below 2.5 million, reflecting a looming vaccine crunch.

From one million active cases a week during the last peak, India already has 3.2 million active cases, and the peak lies somewhere in the future. The second wave of Covid-19 has hit India like a tsunami and the Modi government is wholly paralyzed, leaving the people unprotected to face this deadly wave.