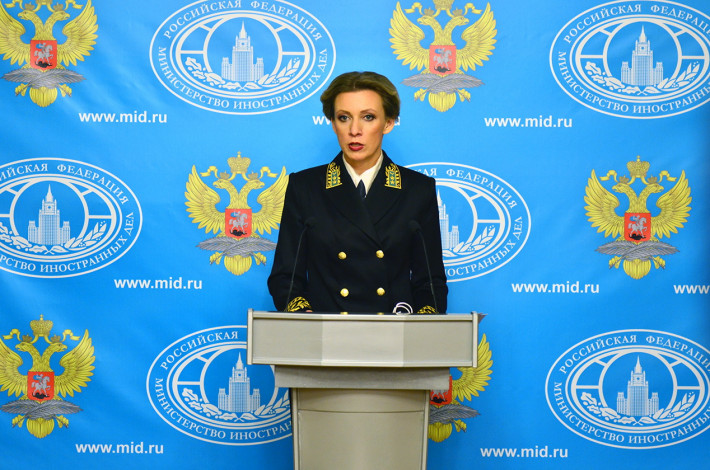 May 4, 2021 (EIRNS)–“Diplomacy is being replaced by sanctions,” Russian Foreign Ministry spokeswoman Maria Zakharova warned in an interview with RT Television yesterday, and this is “undermining mutual trust and darkening the prospects for normalizing relations” between Russia and the collective West.

“The vicious practice of imposing unilateral political and economic restrictions, especially the extraterritorial application of such measures, is an infringement on the sovereignty of states and interference in their internal affairs aimed at keeping, at any cost, their [imposers’–ed.] dominant position in the global economy and international politics, which they are gradually losing,” she charged.

She discussed various measures which Russia is taking to defend itself: consolidating its national financial system, searching for new international partners, diversifying foreign economic ties while developing advanced, competitive domestic industries which lay the basis for substituting domestic products for what was previously imported. New legal mechanisms are being worked on, and legislation “providing for measures to counter new potential unilateral steps by the United States and other countries” is being drafted.

RT asked several questions about ways Russia might protect itself from restrictions on its access to Western financial systems. Zakharova noted that cutting Russia off from the SWIFT system for international settlement of payments “is so far considered a hypothetical scenario.” That said, work is underway on reducing Russia’s dependence on the dollar, a discussion that has been underway for at least a decade, she noted. She referenced that the 2007-2008 crisis “called into doubt the sustainability of the world currency system based on the supremacy of one national monetary unit.”

Zakharova made clear that such discussions are not taking place just in Russia, as finding ways to secure “the independence and sustainability of the financial system to external threat is increasingly becoming a priority for any state.” Russia will not be driven by the “hostile foreign policy” of others to shut out the outside world; it is discussing measures that can be taken with regional neighbors, the BRICS, and others.

Once again, Zakharova, as other high-ranking Russian officials have consistently been doing, proposed that Western nations change course, and come to the table to reach agreements which defend everyone’s interests: “We have repeatedly made it clear that we did not start this sanctions war, but we are ready, at any point, to do our part in order to end this pointless confrontation, in which there will not be and cannot be any winners…. We strongly support a broad international discussion of ways to counteract the illegitimate unilateral measures. We are confident that a systematic dialogue should help reduce the business community’s concerns regarding the uncertainty and instability in global affairs, which are provoked by the West’s one-sided and inconsistent policy.” The RT coverage can be found here.

The Foreign Ministry carries the transcript of the interview on its website.