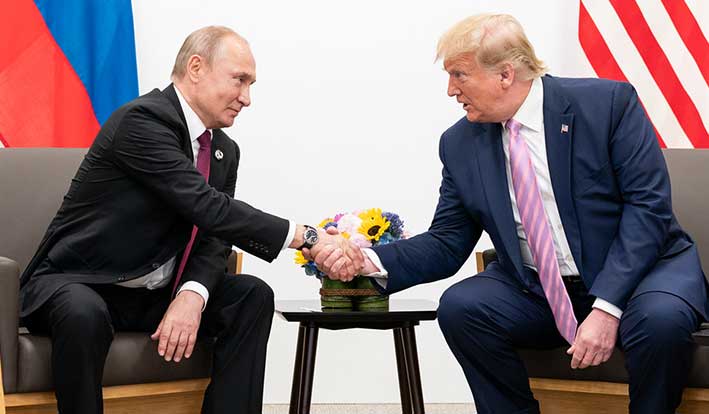 Speaking at his press conference after the first day of the G20 meetings in Osaka, Japan, President Donald Trump praised Russian President Vladimir Putin and their relationship. “You are going to have to take a look at the words, we had a discussion, we had a great discussion President Putin and myself, I thought it was a tremendous discussion, and he would like to trade with United States and they have great products, rangeland, very rich land and a lot of oil, a of minerals, the things that we like, and I can see trade going on with Russia, we could do fantastically well. We do very little trade with Russia, so I could see positive things happening.”

Trump told Rossiya-24: “He is a nice guy, I think. We’ve had an excellent meeting…. Our two great countries, Russia and the United States, must trade with each other. Yesterday’s meeting was great. He [Putin] is an extraordinary man.”

Speaking at his press conference on Saturday Putin said he and Donald Trump had asked their diplomats to begin talks on the New START nuclear arms control treaty. “As for New START, we have ordered foreign ministries of our respective countries to begin consultations. It is too early to tell whether it will help prolong New START,” Putin told reporters.

Putin’s press secretary Dmitry Peskov told Rossiya-24 TV network on June 28: “The sides declared the readiness to discuss the most burning problems. Will this declared intention be realized? Let us wait and see. I am confident that on the Russian part, namely on the part of President Putin, these declarations of readiness are backed by actual possibilities, actual readiness. But what about the American side? Let us wait and see.”

Peskov said the two leaders “outlined problems of mutual interest. They spoke about Iran, Syria, Ukraine. President Trump asked about the Ukrainian military mariners. They spoke about other regional problems, they spoke about international trade. They also mentioned the necessity to begin expert-level talks on disarmament and strategic stability,” Peskov said, adding that these topics required a comprehensive approach and time to discuss. “The willingness to do it was expressed today. So, let us wait and see what becomes of it.”

Russian Foreign Minister Sergey Lavrov commented: “I would say that the attitude remains the same because all Russian-U.S. [summit] meetings, beginning with Hamburg in 2017, Helsinki in 2018, telephone talks, were all very constructive,” Lavrov said. “The two presidents are committed to developing dialogue and refraining from making the biggest global security issues, which are of interest to the entire world, hostage to some problems within the U.S. elites. I believe this is a very positive fact,” he said.

On the issue of trade between the U.S. and Russia, Lavrov said, “Although it [trade] keeps growing, it lags behind in terms of absolute figures compared to many of our partners and many American partners,” and that the talks also touched upon the necessity to reinvigorate the joint work of the Russian and American business circles.

“Among the international issues they discussed Syria, Ukraine, Iran. Iran [was considered] in the context of the current situation around the Joint Comprehensive Plan of Action on the Iranian nuclear program and what is happening in the Gulf of Oman. The situation is difficult, but both presidents confirmed that they want to find a diplomatic way out of this situation,” he said.

“For the moment, I don’t know how it will be implemented at the working level, what decisions will be made in Washington. But we will definitely strive to ensure that everyone who can somehow influence this situation is working towards a diplomatic solution,” the minister went on.

Meanwhile the invitation for Trump to attend the anniversary of the World War II victory in 2020 will be sent in the coming days, Peskov told reporters. “It is true, as it was said before, Putin invited Trump to [attend] the 75th anniversary of the ending of World War II … next year.” He said, “Trump was positive [about the invitation] and said that he would be expecting an official invitation.” Peskov underlined that the official invitation “will, of course, be sent in the coming days.”