US Sec. of State Blinken to Visit Ukraine May 5–6 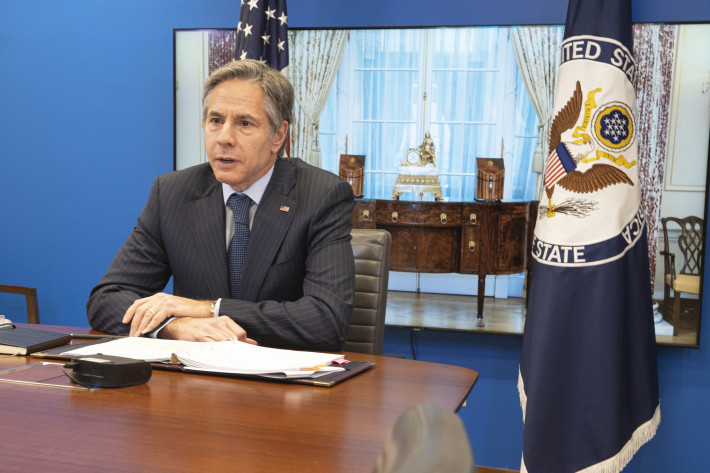 US Sec. of State Blinken to Visit Ukraine May 5–6

US Secretary of State Blinken to Visit Ukraine May 5–6 –

Apr. 30 (EIRNS)–“Secretary of State Blinken tells CBS News he will travel to Ukraine next week amid rising tensions with Russia,” CBS journalist Norah O’Donnell wrote in her Twitter account on Thursday. CBS aired a clip from its interview with Blinken, a teaser for the full 60 Minutes interview to air on Sunday, May 2, in which he said, “There are more forces amassed on the border with Ukraine than any time since 2014 when Russian actually invaded…. What we have seen in the last few days is apparently a decision to pull back some of those forces and we’ve seen some of them in fact start to pull back.”

Meanwhile CNN claims Blinken’s visit to Kiev is meant to show NATO allies that the US will not relax its anti Russian hawkish policy at the possible Russian-American summit.

The State Department reports that Blinken’s visit to Ukraine is the second stop on his European tour. First stop: the G7 Foreign and Development Ministers’ Meeting in London, May 3-5, 2021. “The Secretary has said wherever the rules for international security and the global economy are being written, America will be there, and the interests of the American people will be front and center,” State explains; “the Secretary is looking forward to discussing the democratic values that we share with our partners and allies within the G7,” specifying that he intends to raise joint efforts “to address the key geopolitical issues we face as we build back better from this pandemic”—including “climate crises.” (The UK has expanded this G7 meeting by inviting Australia, India, South Africa, the Republic of Korea, and Brunei in its capacity as Chair of ASEAN.)

While in London, Blinken will also meet with Boris Johnson and Foreign Secretary Raab “to discuss shared U.S.–UK priorities related to addressing global issues and to affirm the strong alliance between our countries.”

Kiev, Ukraine, then, is May 5–6, to “meet with President Zelenskyy, Foreign Minister Kuleba, other officials, and representatives of Ukrainian civil society to reaffirm unwavering U.S. support for Ukraine’s sovereignty and territorial integrity in the face of Russia’s ongoing aggression.” And, State adds, to press Ukraine on “institutional reform.”