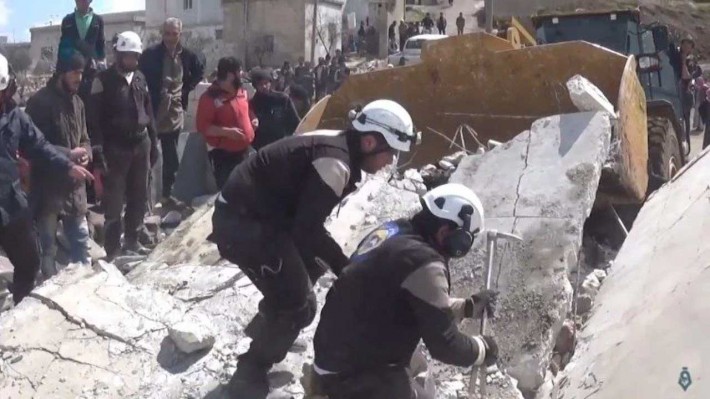 The Russian and the Syrian governments have exposed over the past three days the intention of the British-backed terrorists in Syria, together with their “White Helmet” terrorist support apparatus, to stage a fake chemical weapon attack, film the White Helmets “saving” the victims, blast the videos around the world on fake news outlets, and induce President Trump to allow the war party to unleash a missile and air assault on Syria. It worked twice before, although Trump restricted the attacks to minor, limited attacks, with few casualties. However, with ISIS largely defeated by the Syrian army, the British intend to provoke a wider war, both to prevent President Trump from carrying out his intention to withdraw U.S. forces from Syria, and to destroy the effort by both Presidents Trump and Putin to bring the U.S. and Russia into a friendly and cooperative relationship. In the eyes of the British Empire, the Helsinki Summit between Trump and Putin marked a deadly threat to the Empire itself.

Let there be no doubt: The British would vastly prefer a thermonuclear showdown, or even a thermonuclear war, between the United States and Russia, rather than see the imperial division of the world between East and West torn down. The power of the City of London and its Wall Street subsidiary depends absolutely on that division.

The first fake chemical attack in Syria took place while Trump was meeting with Xi Jinping in Florida in April 2017, aimed at undermining Trump’s personal cooperation with China’s leader. The second attack came in April of this year, based on a White Helmet video which was proven by multiple witnesses, and even the testimony of the supposed “victims” themselves, to have been completely staged by the White Helmets.

The difference now is that the Russians and the Syrians have the evidence ahead of the fake chemical weapons attack, and have made it public, calling on the world to stop it. Russian Defense Ministry spokesman Gen. Igor Konashenkov told the press on Aug. 25: “To carry out the alleged `chemical attack’ in the city of Jisr al-Shugur in the province of Idlib, militants from the Tahrir al-Sham [Jabhat al Nusra in Syria]…, had delivered eight tankers with chlorine to a village a few kilometers from Jisr al-Shugur. This provocation, with the active participation of the British special services will serve as another pretext for the U.S., U.K., and France to conduct a missile strike on the Syrian government and economic facilities.” He identified both the White Helmets and the Olive Group, a 5,000-strong British mercenary organization based in Abu Dhabi, as active participants in preparing the provocation.

When the British claimed that Assad was using chemical weapons in 2013, without evidence, President Obama ordered preparation for a full-scale military assault on Syria. Only the mass mobilization of the citizenry forced Obama to back down, after an outcry against yet another illegal and genocidal war against a Southwest Asian country which was no threat the West, and which in fact was staunchly anti-terrorist.

A similar mobilization today can and must prevent the current British plan for war. The fact that President Trump, unlike Obama, is opposed to regime change, wants to pull out of Syria as soon as ISIS is fully eliminated, and wants the U.S. and Russia to collaborate in this and other tasks, means that exposing this British provocation will also greatly contribute to stopping the British coup attempt against Trump through the Mueller Russiagate witch hunt.

In fact, President Trump was elected precisely because he is intent on breaking the “Special Relationship” with the British, a relationship which has turned the U.S. into a post-industrial junk heap, with a drugged up and demoralized population and a policy of permanent warfare. The LaRouche movement knows what is needed to make Trump a great President and to truly make America great again: He must be liberated from the coup attempt, freeing him to join with Russia and China and India in a New Bretton Woods agreement, to put the Western financial system through bankruptcy proceedings and restore the industrial economies of the West, in league with the New Silk Road development of the entire world. Without the United States taking that dramatic step, there is no possibility of the world avoiding disaster, and no possibility of the United States taking that step if Trump is brought down by the war party.

The New Paradigm is within our grasp, if we rise to the moment as a human race, to end geopolitics and Empire from the face of the Earth.