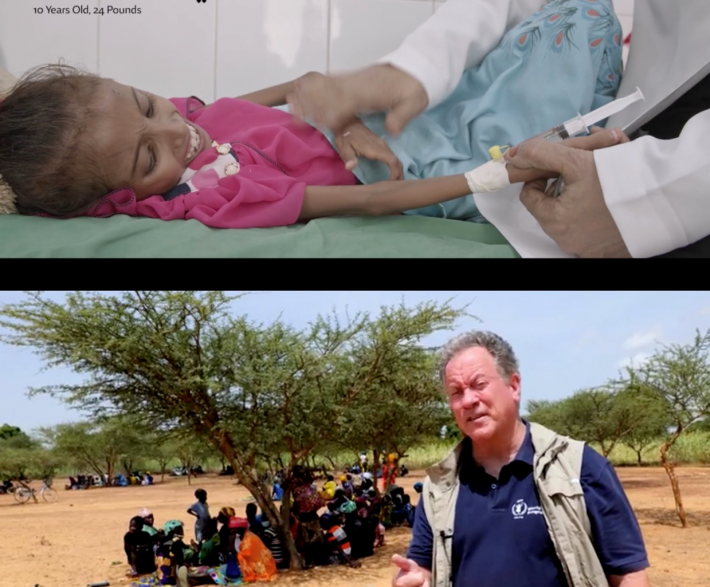 The new half-hour film focuses on the terrible plight and death rate of malnourished children in Yemen, featuring coverage at the Sadaqa Hospital in Aden, the nation’s largest hospital; and the Aslan Clinic, the largest malnutrition treatment center in northern Yemen. The scenes and the words of the medical directors—Dr. Aida Alsdeeq in Aden and Nurse Mekkiah Mahdi at the Aslan Clinic—are gripping. The film also shows the sad horror of the wreckage of a Saudi missile strike against a funeral gathering in Yemen, with shoes of dozens of the dead still scattered in the rubble of the ruins. The postscript states simply that Saudi Arabia, with U.S. backing is still making war on Yemen, and that France, Germany, other nations, and the Houthis are complicit.

Beasley has given this documentary advance publicity to mobilize world attention on the growing famine in Yemen and internationally, which he spoke about on April 7 in a virtual forum at the Biden Institute at the University of Delaware. Speaking to a student audience, Beasley repeatedly stressed that the warfare must stop, and famine is “man-made.” He said that in the next ten days, he will visit Haiti, Honduras, Guatemala, and if possible, Venezuela, because of the worsening food situations here.

Beasley gave the Delaware students a status report on world hunger today, and how it is increasing. He said that when he came into office in 2017, there were 700 million hungry globally, and 80 million on the brink of starvation. That number on the brink increased to 135 million just before COVID-19 began. Today, that number is 270 million. Out of this number, 34 million are nearing the point of starvation. He called it phase 3 to 4 (on the UN scale called IPC—Integrated Phase Classification: No. 1, real, but minimal food insecurity; 2, stressed; 3, crisis; 4, emergency; 5, famine).

Beasley went into a “breakdown by country,” according to the IPC scale. This includes, for example, 19-21 million people in the Democratic Republic of the Congo at Phase 4; and 19 million in Afghanistan at Phase 3 to 4. “Syria is imploding”; Haiti is in crisis, he said.

Beasley called for $5 billion for world anti-famine work, on top of the ongoing anti-hunger funding. “We have a vaccine for starvation … it’s called food,” he stressed. In the Q&A, when one student asked about nutritious food, Beasley said, in essence, that, of course, that is necessary, but he explained to the young questioners the fact that “food for survival” is now the issue before us. He declared that the WFP budget was covered at $5.9 billion in 2017, then in 2020 rose to $8.9 billion, but said that is not enough. This year it needs to be in the $15 billion range. He recognized that the U.S. increased its contribution to the WFP from $1.9 billion four years ago, up to $3.47 billion. He identified that while Washington is typically “fighting over everything, with rinky-dink concerns,” there has been a bipartisan agreement on food aid. He scored the billionaires who watch the deaths happen: “I get upset … in 2020 a new billionaire was created every 17 hours.” There were 493 new billionaires created last year. “And all I need is $5 billion.”