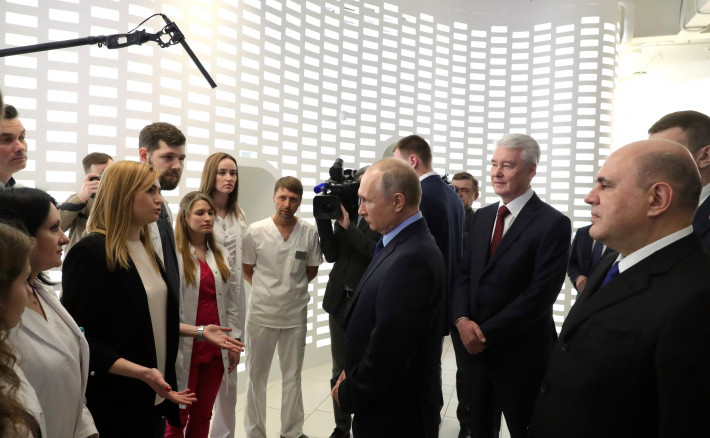 Mar. 25 (EIRNS)–Russian President Vladimir Putin held a videoconference earlier this week on the scientific and industrial mobilization needed to expand COVID-19 vaccine production, and to attack the virus. By way of introduction, he said that their Sputnik V vaccine, now approved in 55 countries representing 1.4 billion people, would expand to 2.5 billion people shortly. He celebrated the latest contract with India for production of another 100 million doses, “the news of the day.” Now there are contracts for the production of 1.4 billion doses. For their own population, Russia is aiming for 139.6 million doses and, as of last week, have 40.2 million.

The Industry and Trade Minister Denis Manturov said that production is ramping up. April should see 17 million more doses. They also have manufacturing agreements in 10 countries. Further, their new EpiVacCorona vaccine is planned for 11 million doses by July. It is designed to be able to hit a wide array of variants. The Healthcare Minister Mikhail Murashko reported on a new version of Sputnik V that can be stored easily at non-frozen temperatures (36-46 degrees Fahrenheit), important for far-flung parts of Russia; and a new Sputnik Light, for trials on 12-17 year olds. The concern there was not-so-much about mortality but about possible and unknown long-term damage to children form COVID-19.

The chairman of the board of Pharstandard, Viktor Kharitonin, reported that their ramping up to 200-300 million doses per year involved recruiting Russian exile scientists back to Russia for the war against the virus: “Over 20 percent of our scientists returned from the EU, the United States and Israel at our invitation and are now helping us develop a modern pharmaceutical industry…”

Gamaleya director Alexander Gintsburg highlighted talks last week, headed by Sergei Razov, Russia’s ambassador to Italy, with Italy’s Spallanzani Institute — “a counterpart of ours” in being the national regulatory institute. They agreed to produce a “draft memorandum of cooperation” to work with Spallanzani’s key resource, “the largest collection of newly emerged and isolated strains of COVID-19 pathogens in Europe…” Plasma samples from people vaccinated with Sputnik V are to be tested for “the neutralizing activity of the serum…” Denis Logunov, Gamaleya deputy director, who actually developed the vaccine, explained that, as with the flu virus, we “examine sera screening from vaccinated patient’s reactions to new strains. I consider this very important… We must not miss the important moment when the virus, for one, gets out of control and the existing vaccines may become even potentially ineffective. In terms of science, I consider this prospect the most important.”