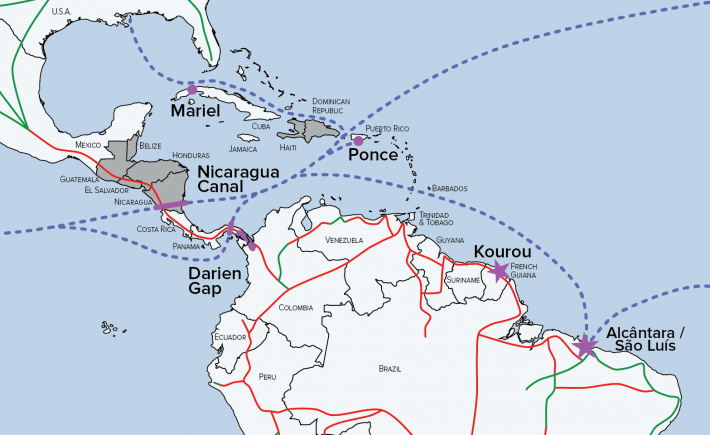 March 17 (EIRNS)—Chinese President Xi Jinping held separate teleconferences yesterday with the President of Guyana and the Prime Minister of Trinidad and Tobago and their teams, encountering great interest from each in expanding their country’s collaboration with China on economic development, and with the Belt and Road Initiative, in particular, according to Xinhua’s report. Xi spoke with both of China’s willingness to work together with the entire Caribbean region on development.

Guyanese President Dr. Irfaan Ali had his Vice President and three cabinet ministers (Foreign Affairs, Public Works and Finance) join him in the discussion, his office reported. Xinhua reported that Dr. Ali thanked Xi in the name of the leaders of major political parties and ministers of Guyana, for China’s assistance in the fight against the pandemic, and spoke of how Guyana “regards China as the most important cooperative partner in its national development, and is committed to strengthening relations between the two parties and two countries.” He conveyed that “Guyana expects to actively promote the Belt and Road cooperation with China, and strengthen cooperation in infrastructure and other fields, and stands ready to actively promote the development of relations between the Caribbean Community and China,” Xinhua noted.

Trinidad and Tobago Prime Minister Keith Rowley was also joined in his teleconference call with Xi by three ministers (Foreign and CARICOM Affairs, National Security and Health), along with the Permanent Secretary to the Prime Minister, his office reported. From Xinhua’s report, it can be said that the geopolitical tale of a “malign” China has not made headway here. Rowley spoke of “the great achievements of the Chinese people, under the leadership of the Communist Party of China (CPC), in such fields as economy, science and technology and poverty alleviation.” Citing China’s success in defeating the COVID-19 epidemic, and leadership in the global fight against the pandemic, Rowley told Xi: “the CPC should feel proud of itself.” As had the Guyanese President, he expressed his nation’s willingness to work with China to actively promote Belt and Road cooperation.