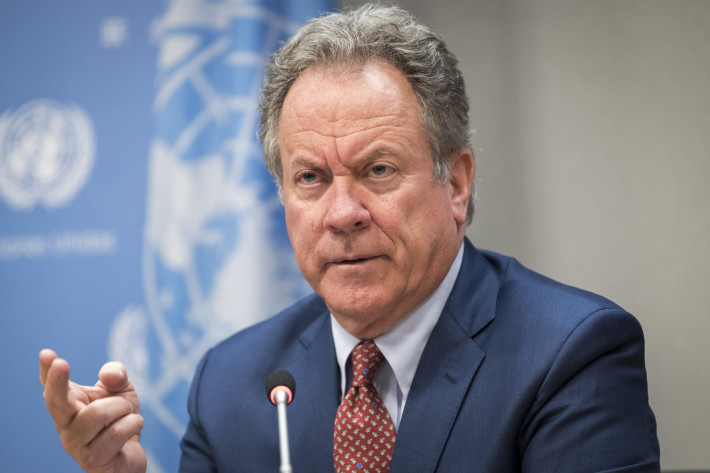 WFP Chief on Yemen: “This Is Hell”

March 11, 2021 (EIRNS)–David Beasley, the executive director of the World Food Program, called the humanitarian disaster in Yemen “man-made,” and described the conditions in the war-ravaged country as “hell… the worst place on earth,” in a March 9 interview with the Associated Press. Beasley was speaking by video teleconference from Addis Ababa, following a tour of Yemen which included the capital of Sana’a. The WFP needs at least $815 million in Yemen aid over the next six months, but has only $300 million, he said, adding that the agency needs $1.9 billion overall for the year.

Beasley said that at a child malnutrition ward in a Sana’a hospital, he saw children wasting away from lack of food. Many, he said, were on the brink of death from entirely preventable and treatable causes, and they were the lucky ones who were receiving medical care.

“In a children’s wing or ward of a hospital, you know you normally hear crying, and laughter. There’s no crying, there’s no laughter, there’s dead silence,” he said. “I went from room to room, and literally, children that in any other place in the world would be fine, they might get a little sick but they’d get recovered, but not here.”

“This is hell,” he said. “It’s the worst place on earth. And it’s entirely man-made.” Yemen has been the victim of a Saudi war of aggression and a merciless blockade, under the direction of British policy-makers and with American support as well.

Beasley stressed that despite all the accusations, the Houthis have actually eased up on their restrictions on the work of humanitarian aid agencies. “We’ve turned a corner with the Houthis… in terms of cooperation, collaboration,” he said, adding that the only obstacle now is the lack of funding.