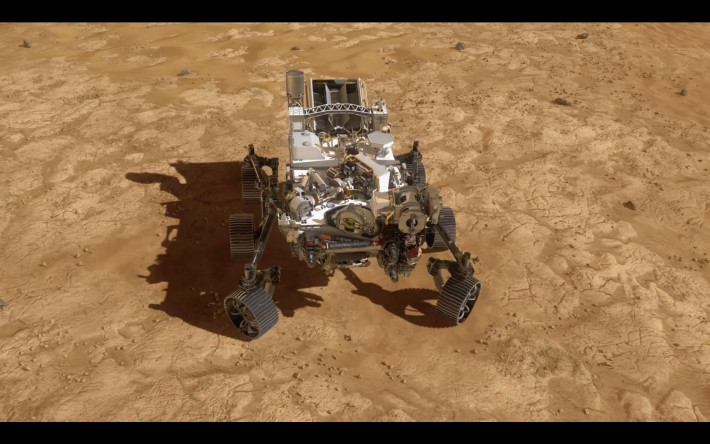 Perseverance Safely on Mars, Right on Target, Ready for Her Search for Life

Feb. 18, 2021 (EIRNS)—NASA’s Mars rover, Perseverance, programmed to arrive at Mars this afternoon, plunged through the atmosphere, and landed at 3:55 PM, Eastern Standard Time, exactly on schedule. It was the fifth time NASA has successfully landed a spacecraft on Mars. For the first time, American and European orbiters already at Mars were aimed, and in some cases repositioned, to photograph and film the craft’s entry, descent, and landing. Perseverance, itself, was equipped to record for the first time the sounds and some images of its entry, descent, and landing (EDL). It was described as the first time we put ears on another planet. Within minutes of landing, Perseverance herself had sent back pictures of her surroundings. Mission managers expect to receive more imagery over the next day or so.

During a post-landing briefing, EDL Project manager Al Chen happily reported that Perseverance had found a good “parking lot” in the Jezero crater, well within its target landing site, landing with very little tilt (1.2 degrees). The Surface team, which will be functioning on Mars time in tandem with their rover, is already at work checking out the Rover’s status, with its power systems looking good right after landing. The rover will be “unwrapped”—various arms and instruments opened up—over the next few days, and the team will then begin to figure out where it will travel and by what route, avoiding sand ripples and examining differences in terrain as it heads out to find a good spot for a heliport to test Ingenuity, the first powered flight vessel ever deployed on Mars.

Perseverance, known as “Percy” by her developers and admirers, is a major advance over its solar-powered golf-cart-sized predecessor. Percy weighs a ton and is the size of an automobile, and she is nuclear-powered. (The team described how there is no need to worry anymore about sand getting on the solar panel.) There’s plenty of dependable power for the two-year mission. She supports advanced equipment, specially designed to search for life on Mars.

The Jezero crater is the site of an ancient lake. It was picked because of its unique status on Mars—having clearly identified channels of the entrance and exit of the water. Near the entrance is a very rich “delta” region, thought to be ideal for finding Martian micro-organisms. Science team member Matt Wallace described the geological richness of the site, saying that they have ahead of them “years of scientific investigating.”

One of the most exciting features of this mission is its sample-caching system, to collect and store soil samples to be recovered and returned to Earth by the first “round trip” Mars mission which must follow. The tubes being used to collect samples were put through a highly rigorous sanitizing process, to make sure that any microorganisms found would actually be Martian in origin.