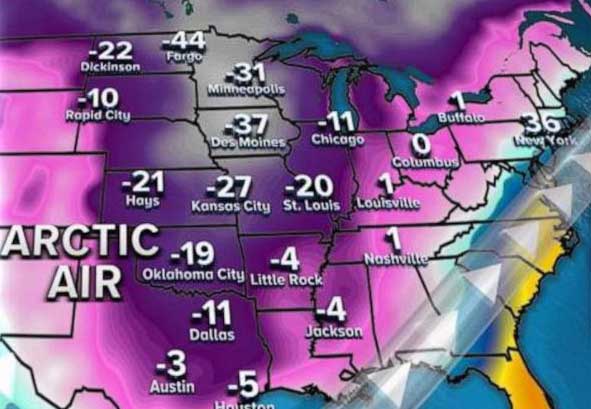 Southwest Power Blackout Disaster: What Can Save the U.S. Economy?

Feb. 15: By Monday night Americans in parts of numerous Southwest and western states were enduring rolling blackouts, some lasting hours in the deep sub-freezing cold of a polar vortex. Many lives were in danger for lack of power and/or electric heat. This shocking event must be a wake-up call to all those, from trade union members to high school and college students, who have been either accepting, celebrating or applying for work to the so-called “Green New Deal”.

As in the electric grid emergency in Japan’s snowstorms in December, windmills are freezing up in Texas. That state’s 23% of rated electric power capacity which is wind, has largely stopped working, and more than 3 million Texans were without power Monday afternoon in near-zero temperatures. The {Austin Statesman} had reported Feb. 14 (“Frozen wind turbines hamper Texas’ power output”) that wind power, usually rated at 25,100 MW in the state, was rated at just 12,000 MW on Sunday, and actually generating considerably less than that. The state’s regulator, ERCOT (Electric Reliability Council of Texas), was conducting load-shedding operations and warning of potential blackouts, which became actual with 10,500 MW of customer lode cut off on Monday. Late Monday, rolling blackouts were beginning to affect the Southwest Power Pool, involving parts of 15 other states.

The states of the Midwest, gripped by the same polar vortex cold, were saved from blackouts by {coal}. An energy attorney on the board of the National Association of Regulatory Utility Commissioners and the Missouri Public Service Commission, Terry Jarrett, wrote a Sunday column on the Upper Midwest situation on mainlinemedianews.com, called “Coal Rescues U.S. Power Grid During Polar Vortex”. The Midcontinent Independent System Operator (MISO), which distributes power in 15 states, said coal was on Sunday generating more than half of all power there in the polar vortex, some 41,000 out of 78,000 MW. Natural gas was generating 22,000 and nuclear 10,000 MW. Wind turbine output, predictably, fluctuated wildly, reaching 2,300 MW at most. Solar? 231 MW. “That means these much-vaunted renewable systems produced only about 4 percent of the electricity needed across 15 states,” Jarrett concluded.

In Texas, some natural gas wellheads also froze, along with refining facilities in some locations. The great demand came both from the extraordinary cold, and from the freeze-up and failure of wind and solar power, the ready back-up power for which is almost always natural gas turbine electric plants.

The Green New Deal has been coming at us for 20 years and more from an instigating center – where? In the British royal family, particularly Prince Charles, who is known along with his father Prince Philip for wishing, {very publicly}, that there were far fewer human beings on this planet than there are. Wind power is just one of the dangerous technological leaps backward it promotes. Just two weeks ago, a big five-day conference of the World Economic Forum, Europe’s center for the Green Deal, targeted “the cement, steel, aluminum and chemical industries, as well as the ships, planes, and trucks that move them.” It claimed these sectors “exceeded the total amount of carbon the world can emit”. And don’t get them started about food – the Royal Institute of International Affairs reported to that conference that you should eat no meat, only plant food, and less of that than you do now.

Do you need any of these to live? Food? Electric power? Do you farm with animals? Work with chemicals or steel or cement? Stop kidding yourself that the Green New Deal is “infrastructure” and “jobs”. Put yourself in a car in Austin or Houston looking for heat in zero weather and to charge your phone. The Green New Deal is physical economic collapse, and deadly.

What will save us? Cooperating with the other major countries that don’t accept this green nonsense – especially China and Russia. Build real infrastructure, especially nuclear and fusion power and space travel technology. Listen to the late Lyndon LaRouche, in a speech eight years ago, “No to the Green Policy; Build the Credit System”:

“So mankind has to change his policy: Dump the Green policy, which is presently the greatest single threat to humanity, that’s a killer! And we have to understand that it is the increase of man’s intelligence, which means also scientific intelligence, the ability to create, the ability to generate higher energy-flux densities per capita and per square kilometer of territory—these are the standards on which credit is generated. It’s to increase the population of the planet: increase it! Stop this killing people: increase it! Because we need more work done. We need, also, increases of the energy-flux density of the work being done. These are absolute necessities for us…. So the point is, we need every human being. We need them to live longer and better. We need them to become more creative. We need to have their children better educated, and developed. We need an increase of the potential productivity of the human force, per capita and per square kilometer, and those are the missions that we must fulfill.”