UN Secretary-General: ‘So Far, We Have Failed’ 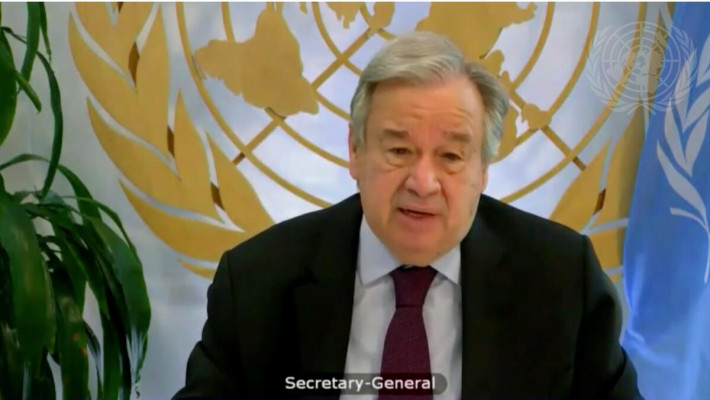 UN Secretary-General: ‘So Far, We Have Failed’

UN Secretary-General Maintains, ‘So Far, We Have Failed’

April 13, 2021 (EIRNS)—United Nations Secretary-General António Guterres yesterday delivered a grim review of the global response to the COVID-19 pandemic and the related hunger, poverty, and unemployment crises, telling a gathering of the UN Economic and Social Council’s Forum on Financing for Development that “no element of our multilateral response has gone as it should.”

Speaking as the current head of the post-war international institution par excellence, the United Nations, Guterres’s speech almost reads like a funeral oration for the demise of the entire Old Paradigm. This is what a systemic breakdown looks like, from the inside.

Guterres said that during the last year more than 3 million have died from the virus. Around 120 million have fallen into extreme poverty, and the equivalent of 255 million full-time jobs have been lost. “The crisis is far from over,” he stated. The crisis is “putting multilateralism to the test, and so far, we have failed.” He went on to say that a “paradigm shift” was needed.

The President of the UN General Assembly Volkan Bozkır echoed Guterres’s grim report, stating that the COVID-19 pandemic has “precipitated the single largest economic contraction in 90 years, devastating lives and livelihoods in the process.”

Guterres ripped into the suicidal immorality of hoarding vaccines, in which a mere 10 countries globally account for around 75% of COVID-19 vaccinations given. He said that the estimated cost of this is more than $9 trillion—without explaining where that figure came from. “To end the pandemic for good, we need equitable access to vaccines for everyone, everywhere.”  Guterres then focused on the debt crisis, saying that “we need to go beyond debt relief,” and strengthen the “international debt architecture to end the deadly cycles of debt waves, global debt crises and lost decades.” But that is as close as he came to actually proposing a solution to the crisis. The best he could muster was to protest that “there has been a $5 trillion surge in the wealth of the world’s richest in the past year” of the pandemic, and that governments should therefore “consider a solidarity or wealth tax on those who have profited during the pandemic, to reduce extreme inequalities.”