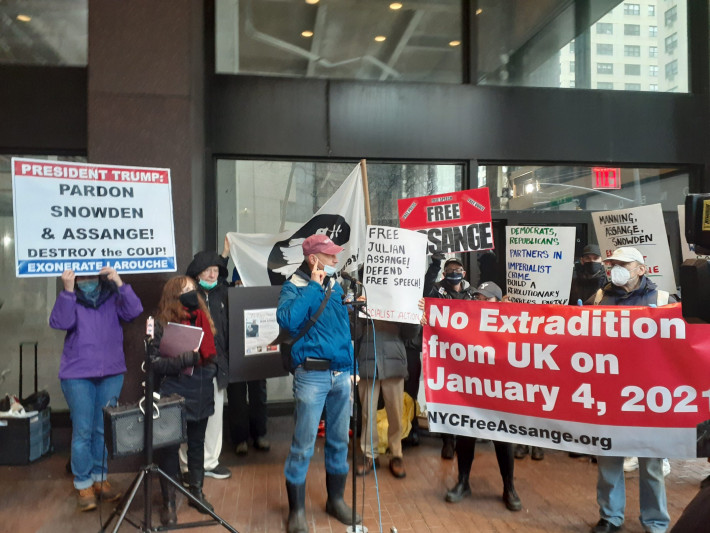 January 5, 2021by David Dobrodt in General

British Judge Vanessa Baraitser today rejected the extradition request of the U.S. government for WikiLeaks founder Julian Assange, and ruled that it would be oppressive to extradite him to the United States where he might commit suicide in prison, Kevin Gosztola, managing editor of Shadowproof website, reported on Twitter and Jaclyn Diaz on NPR today. Judge Baraitser set a bail hearing for Wednesday, and Assange’s supporters welcomed a victory; but the judge otherwise accepted the U.S. Justice Departments indictment charges against Assange lock, stock and barrel, and even implied he could be charged under the British Official Secrets Act as well. All involved understand that a pardon by President Donald Trump is the only way to end the physical and mental depression of Assange’s health under indefinite imprisonment, which caused Baraitser’s surprise denial of extradition.

Baraitser said that she believed  that Julian Assange would likely be imprisoned at a U.S. supermax prison, with Special Administrative Measures. According to Gosztola’s article, Baraitser stated, “I am satisfied that, in these harsh conditions, Mr. Assange’s mental health would deteriorate, causing him to commit suicide with the ‘single-minded determination’ of his autism spectrum disorder”  (only recently  diagnosed in prison). Baraitser then declared, “I find that the mental condition of Mr. Assange is such that it would be oppressive to extradite him to the United States of America.” She  pointed to a suicide attempt by Chelsea Manning in the Alexandria, Virginia Detention Center where Assange would be held before and during trial.

The Newcastle Herald reported that Kristinn Hrafnsson, editor-in-chief of Wikileaks, said, “It is a day with a win for Julian Assange but we have to be cautious, it’s not necessarily a win for journalism. I am concerned that instantly upon giving her decision, the US lawyers indicated they would appeal but they should not.” Assange’s partner Stella Moris, at an impromptu rally, called to Trump: “Mr president, tear down these prison walls. Let our little boys have their father. Free Julian, free the press, free us all.”

The U.S. government, Gosztola reported, will submit an appeal with the High Court of Justice, and Assange will have an opportunity to apply for bail from Belmarsh, where he has been imprisoned since April 2019. Assange was charged there with 17 counts of violating the Espionage Act, and one count of conspiracy to commit a computer intrusion that contains elements of an Espionage Act offense. Then a superseding indictment in 2020 contained new general allegations that targeted Assange’s speeches at conferences and the role he allegedly played helping whistleblower Edward Snowden leave Hong Kong. While press organizations worldwide condemned the charges against Assange as simply common newspaper practices, Baraitser accepted all U.S. government charges.

Many prominent supporters, members of Congress from Matt Gaetz and Rand Paul to Tulsi Gabbard, many organizations including The LaRouche Organization have called for Assange’s pardon by President Trump. One of those supporters, Mexican President Andres Manuel Lopez Obrador, said today, “I’m going to ask the foreign minister to ask the UK government about the possibility that Mr. Assange go free and that Mexico offer him political asylum.” He called the denial of extradition “a triumph of justice,” but said “Assange is a journalist” and deserves his freedom.