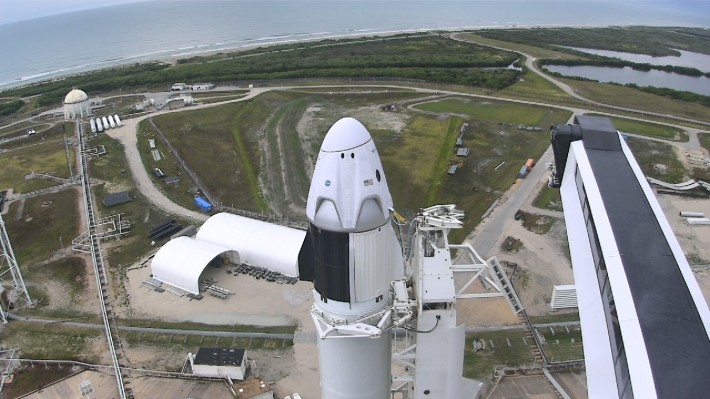 May 27 —This week’s pending launch of the NASA/SpaceX manned Crew Dragon flight to the International Space Station (ISS) has put “Launch America” optimism back into the everyday atmosphere in the U.S.—not only the vision of space travel once again, but the joy of science and technology. Today’s last- minute postponement of the take-off was due only to weather, not malfunction or a mystery glitch. President Donald Trump and Mrs. Trump, on hand in Florida this afternoon, will return Saturday to the Kennedy Space Center for the rescheduled launch May 30 at 3:22 pm EDT; if weather again intervenes, May 31 is the next launch date.

The additional dimension to the U.S. renewed space commitment is international cooperation. NASA Director Jim Bridenstine, speaking at a pre-launch briefing May 27, was asked about the U.S. relationship to Russia, and he replied, “our cooperation transcends above terrestrial geopolitics.” This is the same spirit of cooperation that Schiller Institute President Helga Zepp-LaRouche calls for in her petition, “Coronavirus Petition: Build a Global Health Infrastructure.”

Bridenstine stressed the importance of the SpaceX Dragon Crew launch, scheduled to take place from the historic pad 39 at the Kennedy Space Center, will be the first time since July 2011 that America, “will launch American astronauts, on American rockets, from American soil.” He reflected that, as this launch is taking place in the middle of the coronavirus pandemic, one thing that will inspire our America is that “all of America can take a moment and look at our country do something stunning again.” Astronaut Nicole Mann emphasized that the flight is our first big step on our road map to the Moon for the Artemis mission and on to Mars. Bridenstine stressed great confidence in the mission, despite the fact that some of the media questions expressed certain doubts or fears of the agencies’ absolute preparedness.

Bridenstine reiterated that the safety of the astronauts was the number one priority of NASA. (In fact, at 4:18 p.m. today, Jim Bridenstine tweeted: “Cloud with lightning No launch for today – safety for our crew members Astro_Doug and @AstroBehnken is our top priority. We’ll try, try again to #LaunchAmerica on Saturday with liftoff at 3:22pm ET. NASA TV will begin coverage at 11 am. Join us again virtually: https://go.nasa.gov/2yqlIIQ.” He did make the point again that NASA is a customer of SpaceX and the commercial crew flights and that the hopes are that these flights would soon be taking place without NASA, to lower the cost and build up the presence of commercial space activities in low-Earth orbit.

He talked about the need to launch a future commercial space station and some of the technologies that would be expanded there, such as 3D printing of organs in space.

In response to a question on U.S.-Russia cooperation and negotiations on the commercial launches, Bridenstine reiterated regarding the ISS, to which the crew will be launching, that half of the station is Russian and the other half American. He said, if we are going to have the continued cooperation that we have had, the U.S. has to be willing to launch cosmonauts on the commercial crew, and Russia has to be willing to launch NASA astronauts on the Soyuz. He pointed to the U.S.-Russian partnership going back to 1975 with Apollo/Soyuz, followed by Shuttle/MIR and then the ISS. Most importantly, “our cooperation transcends above terrestrial geopolitics,” said Bridenstine.

He concluded by responding to a question about the efforts and credit that go to previous administrations for what is underway in the space program today. He said the space program stretches beyond one administration to another, and said space exploration unites people beyond geopolitical boundaries, unites not only Democrats and Republicans, but all nations. President Donald Trump has made a commitment to return American astronauts to the Moon for permanent presence with the Artemis mission and on to Mars. He reiterated the bipartisan support for Artemis.