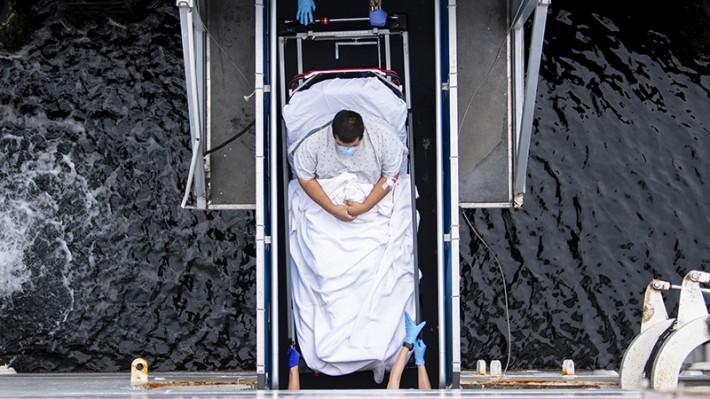 This is the third part in a three-part series. In Part I, we gave a road map for tackling the COVID-19 pandemic from a global standpoint. In Part II, we discussed the necessary health measures in more detail.

Providing the health measures in Chapter 1 will require major investments into manufacturing and into basic economic infrastructure. Here in Part III, we take up the physical, economic, scientific, and political changes needed to make these measures possible on a global scale. The inexcusable condition of the world, in which poverty still exists in the year 2020, must be remedied. This is eminently possible, as China’s experience in eliminating poverty over the past four decades has shown.

The platforms of physical improvements we make to our surroundings provide the human species with a synthetic, nurturing environment far superior to the “natural” environment we share with the apes. By controlling water flows, draining swamps, irrigating fields, building canals, railroads and roadways, developing water and wastewater systems, creating electrical and communication grids, and improving the flora and fauna, the human species has a unique power to make this Earth a garden. This infrastructure includes such soft infrastructure as an educated and culturally uplifted populace. Much of the investment into eliminating poverty will be of the form of basic economic infrastructure. And the current coronavirus pandemic points to the particularly urgent need of health infrastructure. But can a hospital be built where there are no roads or electricity? What are the requirements for the provision of health services?

Numerous companies have expressed interest in retooling for the production of ventilators, from automakers to aerospace companies. The list includes:

Current producers are ramping up production:

If all goes according to projection, the companies listed above would supply at least 300,000 ventilators by July. An April 9 Politico article reports that estimated demand solely from the United States and several Western European nations was for one million ventilators; the world’s needs will be higher.

3M intends to double its international production to 2 billion N95 respirators over the next year, and is presently producing about 100 million respirators per month.

Honeywell Industries has upgraded a facility in Rhode Island and is revamping its aerospace facility in Phoenix as part of their overall increase in production to 120 million per year.

The coronavirus pandemic now afflicting the world is only one of the deadly viruses we face. The financial virus chiefly centered in the City of London and in Wall Street has proven to be no less deadly over the past decades. The cultural virus infecting the addled minds of foolish politicians still fighting the Cold War threatens to wreck the potential for precisely the kind of collaboration required to defeat the other viruses.

A summit discussion involving President Donald Trump, President Vladimir Putin, President Xi Jinping, and Prime Minister Narendra Modi is urgently required to achieve the cooperation needed in the short term to address the menacing health crisis. Such a summit is also the means by which, according to Lyndon LaRouche, a new and just economic system can be put into place globally.

The world must join forces as a single humanity to stop the impending mass-death in Africa, in particular, as the coronavirus spreads. Brigades of engineers, medics, and other skilled personnel from scores of nations must be mobilized, deployed and coordinated under the United Nations and African Union, and with full respect for the sovereignty of all nations. Building health and sanitation infrastructure, assisting in supplying necessary medical and protective equipment, and assisting with administration of health systems are among the urgent jobs at hand.

African nations must also be granted an immediate cancellation of their foreign debts; the world must choose life over debt.

Similarly, all sanctions, armed conflict, border disputes and the like must stop internationally. Much better to use those resources for the common battle of mankind against the coronavirus.

Lyndon LaRouche warned nearly fifty years ago that President Nixon’s August 15, 1971 takedown of the Bretton Woods system would lead to devastating economic effects that would result, in the end, in fascism. This is seen today in, among other places, the green outlook whereby people supposedly concerned about the world’s future act to deny energy development to the world, condemning millions to early deaths. Some few years later, in 1974 and 1975, LaRouche warned that worsening economic conditions would create the conditions for the rapid spread of diseases, including new diseases, threatening a biological holocaust. While it may seem that China and major developed countries are bringing the current pandemic under some form of control, what will the next months bring to the developing world if there is not a radical and sudden change?

To create an economy resilient in the face of such crises as the emergence of new diseases, requires enormous investments in basic economic infrastructure, as well as a reconceptualization of economics.

Lyndon LaRouche was adamant that economics is not about money, or about values that could be expressed in monetary terms. Rather, the secret of economic growth is the ability of the creative human mind to discover and develop new physical principles that expand the capabilities of the human species. As a rough measure of the value of a discovery, or of a cultural outlook, Lyndon LaRouche used the metric of increase of potential relative population density — a measure of what the population density could be, relative to the quality of land and improvements made to it. That is, how many people could be supported, per square kilometer, on the basis of a certain repertoire of discoveries, technologies, and culture? And what sort of culture could act to increase that value? That is the location of economic value.

In one of his last policy papers, Lyndon LaRouche demanded the immediate implementation of four laws that he said were necessary for the United States. They are needed for the world as well. First, a banking reform based on principles of the 1933 Glass–Steagall law, to deny speculative investment the protection of government while ensuring commercial banking could play its useful role. Second, national banking arrangements whereby governments can make long-term credit available for physical economic purposes, rather than for financial stability as has been the practice of the Federal Reserve and European Central Bank. Third, metrics for the application of the needed credit, based not on financial gain but on physical economic growth. Fourth, the new discoveries needed for human growth over the next fifty to a hundred years: nuclear fusion, space research, and fundamental breakthroughs in biology, to name three powerful examples.

By unlocking the true economic potential of our current repertoire of scientific discoveries and the potential to further expand it, poverty and hunger can be entirely eliminated within a generation, or even within a decade. Nuclear fusion power will change our relationship to energy, water, and resources. Fusion-powered rockets will keep us safe from any asteroids threatening to careen into our planet. Biological advancements will cure disease and allow for the rapid eradication of newly emerging threats. And, most importantly, the fear of large-scale international conflict can be overcome as we come to realize our common aims, here on Earth, and beyond!

Register for the Schiller Institute’s April 25–26 conference to hear from experts on this topic and much more!