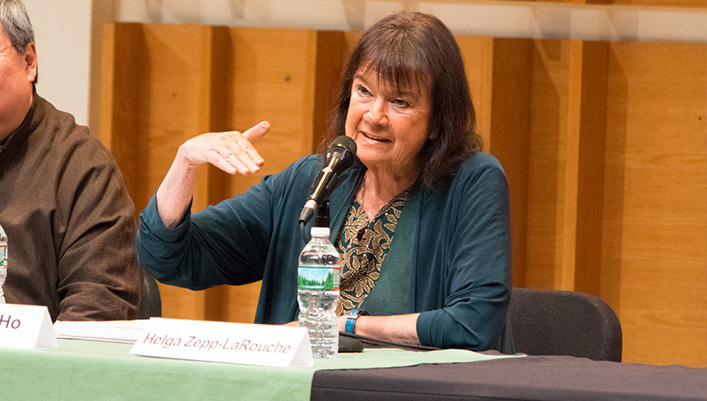 Sputnik International published an interview with Helga Zepp-LaRouche, identified as head of the Germany’s Civil Rights Movement Solidarity (BüSo) party, warning that if Europe hosts new U.S. missiles it will sign a “suicide pact,” and that the solution to strategic tensions is to expose the real authors of Russiagate. The interview was published in the English (International) and Portuguese-Brazilian editions of Sputnik and picked up by a newswire in Indonesia. The dispatch was headlined: “Europe to Sign Own ‘Suicide Pact’ If Hosts New U.S. Missiles — German Politician.”

“`If Europe were to accept the installation of new U.S. missiles on its territory in this strategic environment, it would sign a suicide pact,’ Zepp-LaRouche said.

“According to the politician, amid somewhat war-mongering  rhetoric in the West, Putin `just reintroduced a reality principle and clarity’ with his warnings.

“‘Despite President [Donald] Trump’s stated intention to improve relations between the U.S. and Russia, including that he may have one idea of replacing the INF treaty with a new agreement, Putin has to take into account the contrary intention of the neocons in the Trump administration and the British ‘minister of war,’ Gavin Williamson, who threatens to use ‘hard power’ and also claims that the ‘boundaries between peace and war are becoming blurred,’ she clarified, making a reference to Williamson’s 2019 Munich Security Conference speech. [sic—Williamson’s speech was on Feb. 11 at the Royal United Services Institute—ed.]

“Meanwhile, Europe’s ‘fundamental self-interest,’ Zepp-LaRouche believed, lay in removing sanctions on Russia and re-establishing good relations with Moscow by creating ‘an economic zone from the Atlantic to the Pacific on the basis of integrating the Belt and Road Initiative, the Eurasian Economic Union and the EU.’

“She went on to note that such cooperation would create ‘a new security architecture’ that should become the basis on which Europe builds its cooperation with the United States.

“When asked to suggest ways to overcome the rifts in the global security environment between Russia and the West, Zepp-LaRouche opined that once the ‘real authors’ of ‘Russiagate’ — the scandal around Moscow’s alleged interference in the 2016 U.S. presidential election, which Russia strongly denies — were revealed, ‘most of the strategic tensions would evaporate.'”