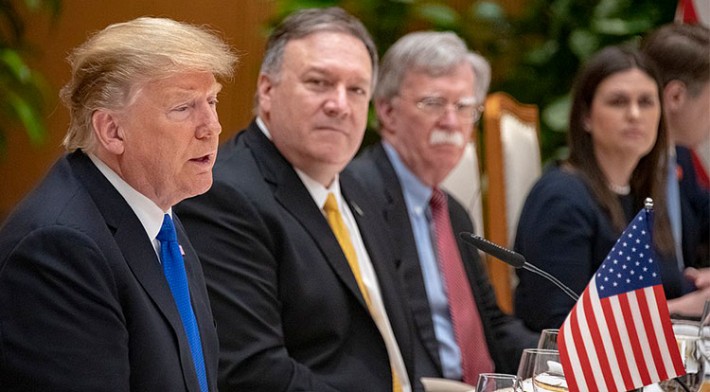 The central theme of Helga Zepp LaRouche’s webcast this week is that the release of the two documentaries on the life and works of Lyndon LaRouche provides essential weapons to defeat the apparatus that brought us within ten minutes of the launch of World War III Thursday. The international mobilization to exonerate LaRouche, she said, is the only way to stop World War III. She repeatedly appealed to viewers to join us in getting the widest possible audience for these two videos.

The decision by President Trump to call off an attack on Iran, ten minutes before it was launched, is an incredible story! The question raised by people all over the world, following his tweet that he called off the strike at the last minute, coming just after the New York Times reported on the “dual power” situation in the U.S. government regarding the decision to escalate cyber warfare against Russia, is, “Just who is making decisions in Washington?

Those British imperial geopolitical networks who were behind the launching of the Get LaRouche Task Force are the same as those behind today’s war drive. The ideas of LaRouche, which shine through the two documentaries released today, were the target of those who prosecuted him. Those ideas can be realized, beginning with the summits between Trump and President Xi, and with President Putin, at the G20 summit next week. As the documentaries demonstrate, the apparatus pushing for war, following its efforts to remove Trump, is the same which unjustly targeted LaRouche. While war was narrowly avoided this time, there will be more incidents which could lead to war, if this apparatus is not brought to justice.

There is no issue more important today, than to bring an understanding of this to the broadest segment of the population worldwide.