Webcast: Trump Announces U.S. Return to the Moon—Need LaRouche’s Four Laws to Get There 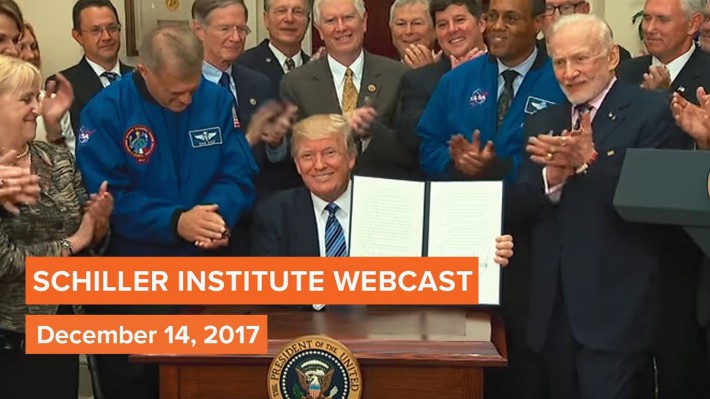 Webcast: Trump Announces U.S. Return to the Moon—Need LaRouche’s Four Laws to Get There

On December 11, President Donald Trump signed a new space directive, opening the door for an expanded vision for U.S. manned space exploration. In announcing this, he said, “This time we will not only plant our flag and leave our footprint. We will establish a foundation for an eventual mission to Mars and perhaps someday to many worlds beyond.” As the President was making this announcement, a meeting of the China-U.S. Civil Space Dialogue brought together Chinese and U.S. officials in Beijing, to discuss reopening cooperation in space. It is the fear among the imperial proponents of a unipolar world, that this kind of initiative by the Trump administration would move the U.S. out of the deadly, endless conflicts they imposed, through the Bush and Obama administrations, that is behind the now-faltering Mueller investigation, to remove Trump at all costs.

To realize the promise of such cooperation — which is in line with the New Paradigm of international relations emerging around the Belt-and-Road Initiative launched by President Xi Jinping of China — it is essential that Americans be mobilized to shut down the British-orchestrated coup against President Trump. At the same time, it is necessary that Lyndon LaRouche’s Four Laws become the basis of Trump administration economic policy.

These Four Laws uniquely provide the basis for the revival of the American System, which is the prerequisite for the scientific and technological advances necessary to revive an American role in space exploration. By bringing the Spirit of the New Silk Road to a broader audience of active citizens worldwide, such goals are now within our grasp. These will be among the topics addressed by Zepp LaRouche this Thursday, in her weekly strategic broadcast.