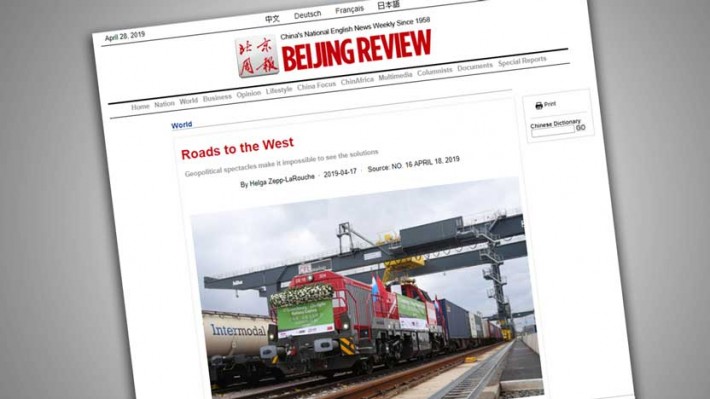 The prestigious Beijing Review on Thursday, April 17, published a major article by Helga Zepp-LaRouche, titled, “Roads to the West—Geopolitical Spectacles Make it Impossible to See the Solutions.”

“For the last several years or so, Western media and mainstream politicians have chosen to largely ignore the Belt and Road Initiative, which Chinese President Xi Jinping proposed in 2013. The initiative, consisting of the Silk Road Economic Belt and the 21st-Century Maritime Silk Road, efficiently addresses the infrastructure needs of developing countries, which the West simply pretended not to exist.

“But, at a certain point it dawned on the Western establishment that China was not only building an enormous amount of railway lines, ports, bridges, power plants and industrial parks in Asia, Africa and even in parts of Europe, but that the prospect of poverty alleviation offered by China instilled an unprecedented spirit of optimism.”