Indian Scholar: The Belt and Road Came from Lyndon and Helga LaRouche 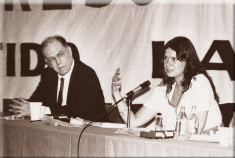 Indian Scholar: The Belt and Road Came from Lyndon and Helga LaRouche

Aug. 28 -Mahmud Ali, an Indian scholar currently at the Institute of China Studies at the University of Malaya in Kuala Lumpur, posted an article on LinkedIn titled “America’s Foundational Contributions to China’s Belt & Road Initiative (BRI)” on Aug. 27. He ridicules the “disdain” from Western officials and media towards the Belt and Road Initiative, and stating that the slanders are “repeated {ad nauseam},” especially in the U.S. But, he continues, the concept “originated in America, with U.S. visionaries envisaging, promoting and advancing the cause of a united Euro-Asian economic space, as early as the late 1980s, before politicians and their assorted advisors had begun considering the possibility of the collapse of the Soviet Union, or the end of the Cold War. It was that American intellectual spark, nurtured by a few farsighted men and women, which illuminated the new world of possibilities. Without it, and direct intervention by governments and multilateral agencies based in America and its allies, there would probably be no BRI today.”

Then, under the subhead “American Prophets Imagine a New Silk Road,” he writes that despite the geopolitical thinking of most people in the West, based on the concepts of Halford Mackinder, “Western thinkers operating outside state-funded national security establishments envisioned a non-competitive, indeed collaborative, vision of the future. One of them, the U.S. politician and co-founder, with his wife Helga LaRouche, of the Washington-based Schiller Institute, Lyndon LaRouche, promoted such a vision, with some success in influencing segments of trans-Atlantic opinion. In October 1988, LaRouche briefed the media in West Berlin on ‘U.S. Policy Toward the Reunification of Germany,’ prophesying the collapse of COMECON economies, and urging food-support to Poland so that a majority of Germans on both sides desired reunification. In December, he assigned a group of Schiller Institute specialists to examine prospects for establishing a Paris-Berlin-Vienna productive triangle. In January 1990, Schiller Institute published LaRouche’s book on a proposed 320,000 sq.km. European economic area comprising a population of 92 million concentrated in 10 large industrial areas, from which he envisaged infrastructural corridors, linked with high-speed railways, radiating in all directions, providing a basis for upgrading living standards across Eurasia.”

Ali goes on to describe Schiller Institute conferences and {EIR} articles between 1991 and 1996 (noting that LaRouche was then in prison), when Helga Zepp-LaRouche presented her speech at the May 7-9, 1996 “Symposium on Economic Development along the New Euro-Asia Continental Bridge” in Beijing on May 8, 1996, titled “Building the Silk Road Land-Bridge: The Basis for Mutual Security Interests of Asia and Europe.”

Then, he writes: “In January 1997, Lyndon LaRouche addressed a Washington conference, urging the Clinton Administration to sponsor a New Bretton Woods system, reorganizing the world economy to prevent disruptive boom-bust cycles, and recognize the global merit of the Eurasian Land-Bridge program. Reinforcing and explaining her husband’s persistent thematic refrain, Helga LaRouche published a commentary titled, `Eurasian Land-Bridge: A New Era for Mankind,’ which was widely circulated across the Atlantic by the Schiller Foundation [sic].” He adds that Helga LaRouche addressed a second conference in Beijing in November 1997. “By then,” he continues, “railway connectivity between coastal China, Central Asia and Russia was a reality; Europe beckoned.”

He next reports on a conference in India organized by Schiller representative Ramtanu Maitra, with leading figures from Russia, China and India, where they “established a Triangular Association with the goal of promoting Indo-Russian-Chinese cooperation in forging a shared vision of Eurasia’s post-Cold War future of peace, progress and prosperity. The effort failed for a combination of distractions and difficulties: fallout from the Asian Economic Crisis, the September 2001 al-Qaeda attacks on New York and Washington and America’s subsequent Global War on Terrorism, wars in Afghanistan and Iraq, and then, the Great Recession. Nonetheless, seeds had been sown in the febrile post-Cold War intellectual hotbeds. Ideas analysed at Schiller’s many conferences and events began gelling into policy-frameworks in early 21st century.”

Ali then reviews other Western interventions into Central Asia, including a number of “bilateral investment treaties” the U.S. signed with coutries in Central Asia and the South Caucasus, aimed at capturing the energy resources and breaking them away from Russia and China, and the so-called “New Silk Road Initiative” sponsored by Hillary Clinton (based on keeping Central Asia out of Russia and China influence), and the Lower Mekong Initiative, also by the U.S. State Department.

However, Ali makes a point that the U.S. initiatives were both “much more modest” than the LaRouche plans, or of Xi Jinping’s plan announced in September 2013, and that the U.S. “more candidly advertised their geopolitical drivers.” On the other hand, he concludes, “Beijing emphasized its economic, indeed geoeconomic focus.”