Schiller Institute Seminar: The Role of the Belt & Road in Peace and Stability in West Asia & Africa 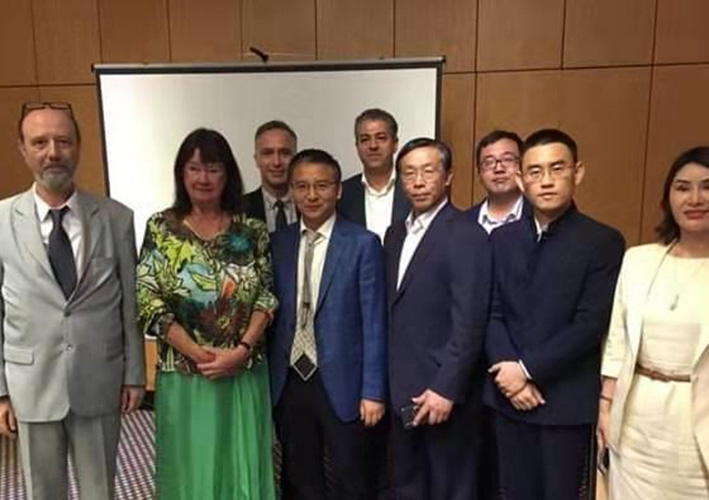 Schiller Institute Seminar: The Role of the Belt & Road in Peace and Stability in West Asia & Africa

The Schiller Institute hosted a high-level seminar in Berlin, Germany on August 29 to provide a report on the true significance and substantial progress of the Belt & Road Initiative (BRI), especially regarding developments in Southwest Asia and Africa. Forty-five people attended, including representatives of Germany’s Mittelstand (small and medium-sized industries), the diplomatic community, and other institutions. A visiting delegation of scholars from the Chinese Academy of Social Sciences (CASS), an important academic organization and research center, presented papers on the role of the BRI in stabilizing the region through economic development. A common theme of virtually all presentations was that for peace to be achieved in this region, a commitment to real economic development is necessary, centered on advances in science and application of new technologies.

Moderator Stephan Ossenkopp of the Schiller Institute opened the event by emphasizing that there is an urgent need for a “rational dialogue” on what the Chinese are actually doing, as opposed to the negative reports in the western media. The BRI is not a unilateral, imperial project, but one which is comprehensive and inclusive.

The keynote, from Helga Zepp-LaRouche, the Chairwoman of the Schiller Institute, expanded on this theme, noting that the BRI is “the most important strategic policy on the agenda.” The speed of its growth in the last six years has been amazing and it is of particular importance for rebuilding the war-torn nations of southwest Asia, and overcoming the suppression of nations in Africa, where Europe could have contributed to the industrialization of Africa, but has not. 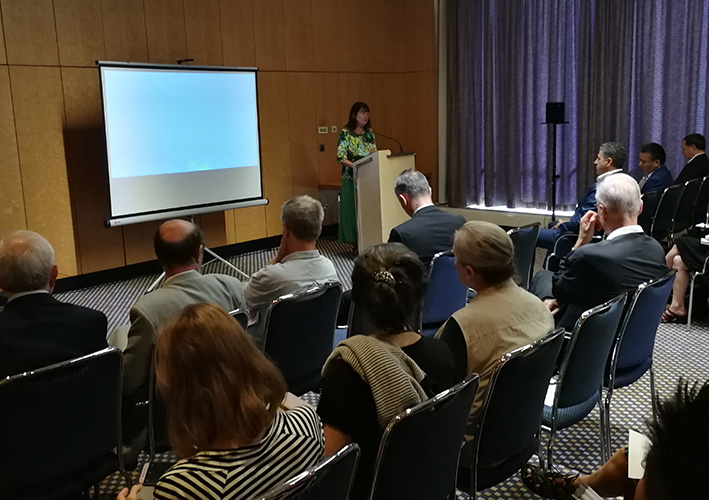 Instead of allowing the opponents of development to turn China into an “enemy,” the truth of what China is doing needs to be more broadly known and understood. The Belt and Road Initiative is necessary for peace and stability, and should be joined by western governments, especially the United States.

Reviewing the present strategic crisis, which has worsened due to the unleashing by the British empire of destabilizations around the world, including against China, and Iran, Zepp-LaRouche said that Europe has an important role to play, if leading nations are to free themselves from their geopolitical strategic orientation.

She spoke of the tremendous potential for German Mittelstand companies to engage in joint ventures in third countries, noting that the policies of the present government do not favor that potential. She emphasized that key to creating change in the Trans-Atlantic region is to inspire optimism, to particularly emphasize the potential unleashed by the new initiatives in space exploration. We must think at least fifty years ahead, she said, and reject the pessimism that is being spread by the Greenies and the financiers who back them.

There were five speakers from Chinese Academy of Social Sciences (CASS). Prof. Tang, the leader of the delegation, spoke on “China’s Concept on Security and Middle East Security,” providing a broad view of the BRI approach to the subject.

He was followed by Prof. Yu, who spoke on the topic, “BRI and the Peace Between Palestine and Israel,” emphasizing the importance of economic development for Palestine, which is essential to realizing the two-state solution to the ongoing crisis. Prof. Wang addressed the “BRI in the Gulf Cooperation Council and Gulf Security” and Dr. Wei, “Iraq’s Reconstruction and China’s Role,” in which he highlighted the difficulties in rebuilding a nation subjected to a war that had destroyed much of its infrastructure. Dr. Zhu spoke on “BRI in Egypt and China-Egypt Cooperation,” presenting an optimistic evaluation of how the cooperation between the two states has provided tangible benefits. 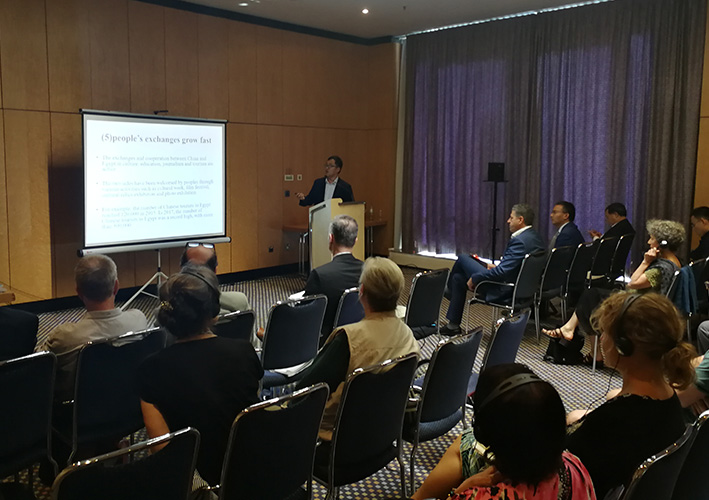 Other Schiller Institute speakers were Hussein Askary, co-author of Extending the New Silk Road to West Asia and Africa, a book-length report, who gave an impassioned account of the progress of the BRI in the two regions, and Claudio Celani, whose report on the Abuja, Nigeria conference on Transaqua provided a concrete picture of what is possible with international cooperation—but also the obstacles created by international financial institutions and their geopolitical strategies which must be overcome.

There were questions from the audience after each presentation, evidence of a hunger for real solutions and a desire to draw out more of the thinking of the representatives from the CASS. Several questions were directed to Helga Zepp-LaRouche, including one on Malthusianism, another on the India-Pakistan crisis. A lively discussion continued after the formal proceedings concluded.

Helga Zepp-LaRouche: “The Strategic Implication of the New Silk Road”

Hussein Askary: “The Belt and Road to Peace and Prosperity in West Asia and Africa”

Yu Guoqing: “BRI and the peace between Palestine and Israel”

Wang Qiong: “BRI in the GCC and Gulf Security”

Claudio Celani: “Why the Transaqua Solution for Lake Chad is a Test of Morality for Europe”