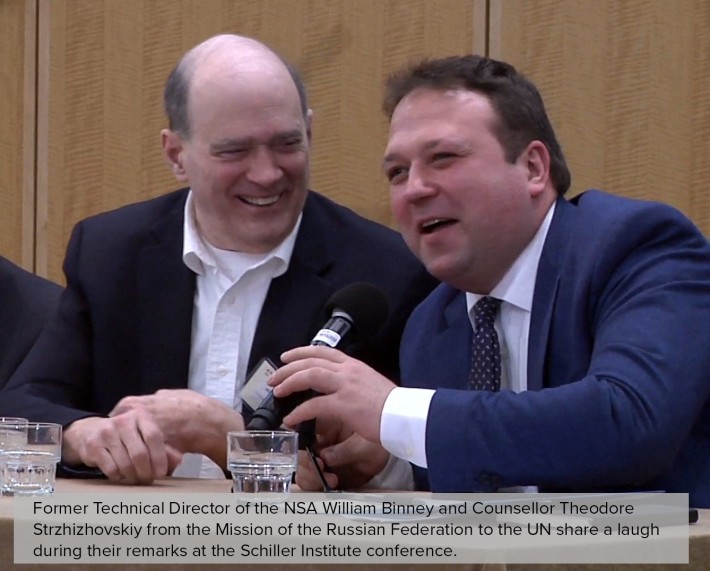 Message to the Schiller Institute national conference, Feb. 16, 2019 by H.E. Ambassador Vassily A. Nebenzia, Ambassador and Permanent Representative of the Russian Federation to the United Nations, presented by Counsellor Theodore Strzhizhovskiy: “Prospects for East-West Collaboration: The Russian Federation’s View”

[This transcription was created by the Schiller Institute]

THEODORE STRZHIZHOVSKIY: Ladies and Gents, it’s a real pleasure for me to be here, giving the tribute to the role which Russian-American relations plays in the modern world, and the contribution of the Schiller Institute to that relation, we prepared a statement which I will read now.

First of all, I welcome the organizers, participants and guests of this conference. The Schiller Institute is known for its valuable contribution to the understanding of international political processes, and development of new approaches to the global challenges. The conferences held under your auspices are respectful platforms, where the most urgent present-day issues can be discussed without politicizing and ideological clichés.

We were very saddened by the bitter news about the passing of Lyndon LaRouche, the founder and inspirer of the Schiller Institute. We would like to express our deepest condolences to Helga Zepp-LaRouche, as well as to the relatives and colleagues.

We are convinced that the paradigm of international, political, and economical intervention that he had proposed will be further developed by his apprentices and associates. [applause]

We believe that the assent of a more human epoch is only possible when the world enjoys a more equitable, polycentric model of governance. However, recently we have become witnesses of the attempts to shatter the world security architecture, substitute agreed universal norms by some rules-based order, where rules are invented, depending on the geopolitical interest to concrete countries. Nonetheless, dangerous for the global stability is the striving of the governments of some countries to unilaterally impose their will on the global community, or on specific sovereign states, or even to interfere in their domestic affairs. In the same light, we should view the use of sanctions as a tool to execute pressure and punish the countries that implement an independent policy.

Russia is proud to be located between West and East. Historically, we have been implementing multitask foreign policy and developing relations with other countries in the spirit of mutual respect. Russia comprehensively helps to search for, based on international law, collective decisions to the global problems which all the countries face today. We consecutively engage in the activities of the UN and Group of 20, to contribute to the relevant forms of interaction, for example, Collective Security Treaty Organization, Eurasian Economic Union, Commonwealth of Independent States, Shanghai Cooperation Organization, BRICS. One of the conceptual pillars of developing this sort of cooperation was proposed by President Putin in his initiative called, “Greater Eurasian Partnership.” It would bring together member states of the Eurasian Economic Union, Shanghai Cooperation Organization, and Association of Southeast Asian Nations. Probably one day, it would encompass the European Union. The previous year was marked by a number of significant steps to implement this project: The Eurasian Economic Commission and ASEAN signed a Memorandum of Understanding which was crucial for the extension of the geography and economy of the Eurasian Partnership. Adoption of the declaration on further development in integrational process in the Eurasian Economic Union made it possible to extend the establishment of common markets and add to it such areas of cooperation as education, research, health care, and trade. The Eurasian Economic Union and Chinese initiative, One Belt, One Road, joined the integration and transportation projects on contractual and legal basis of the agreement on trade and economic cooperation.

Bilateral cooperation of Russia and China also takes on global dimension. Our effective foreign policy coordination, including the UN platform, has become a significant factor of stabilization in global policy.

We are also committed to foster our relations with another privileged strategic partner: India. This commitment was reiterated in the joint declaration “Russia-India Reliable Partnership in a Changing World,” adopted at the bilateral summit in October.

We cannot but mention an unofficial summit, Russia-India-China, that took place in December in Buenos Aires after a 12-year pause.

Relations between Russia and the U.S. are also crucially important for global stability, because we are two states, major nuclear powers and UN Security Council permanent members. We face shared challenges: international terrorism, military and humanitarian crises, drug trafficking, transnational crime, and others. The success of our joint efforts of these and many other tracks is that both Moscow and Washington are interested in what is needed in the sustainable development of all countries. Russia understands the increased responsibility of both states for global peace and security. We have repeatedly expressed our readiness to normalize the relations between our countries. We hope that systemic political dialogue with our American partners, based on mutual respect and consideration of each other’s national interests, will be resumed.

We are convinced that the present-day world has no alternative to cooperation and merge of potentials. Only this path may lead to the assent of a more human epoch.

We wish for this conference to be creative, and contribute to mutual trust and confidence of global affairs. We wish you every success and hope we will have meaningful discussions.