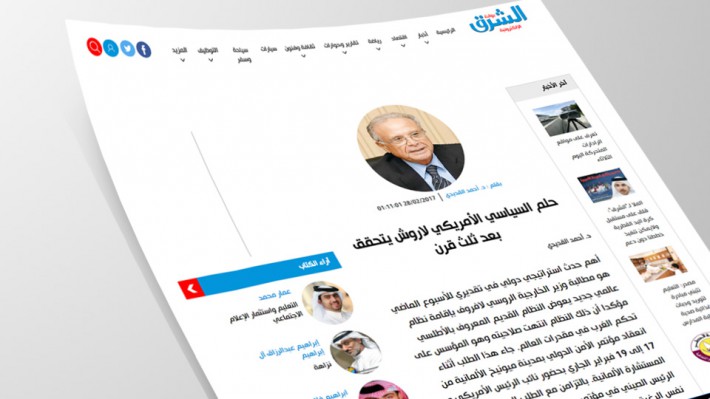 Feb. 28, 2017 –The following is a translation from the Arabic of a syndicated op-ed that was published today (February 28, 2017) in the leading Qatari daily {Al-Sharq} (http://www.al-sharq.com/news/details/473796 ). It is republished in several other Arabic newspapers and websites. The author is Dr. Ahmed Kedidi, former Tunisian diplomat and guest lecturer in many Arab strategic studies institutions. He is a long-time friend of Helga and Lyndon LaRouche, and frequent participant in Schiller Institute conferences in the 1980s and ’90s. He has also signed many petitions presented by the Schiller Institute. Dr. Kedidi is currently a resident of Qatar.

The most important international strategic event that took place last week, in my view, is the call issued by Russia’s Foreign Minister Lavrov to create a new world order to replace the old system, known as the transatlantic system, stressing that the latter system has reached its expiry date. It is a system that has been based on the West’s control over the livelihood of the world. This call was issued during the cessions of the international security conference held on Feb. 17-19 in Munich, Germany, in the presence of the U.S. Vice President and the German Chancellor. Coinciding with this, the President of China stood in the Beijing conference for international cooperation to express the same desire, proposing to replace the decaying transatlantic system with the “New Silk Road” project which relies on economic development and cooperation and peace among all the nations of the world.

Then, I became certain that President Trump’s description of the NATO system as an outdated one, falls into the same strong and joint paradigm towards changing the rules and aims of the world order and replacing it with an alternative order. But what most observers missed is that this is the alternative that was proposed to the leaders of the world by Lyndon LaRouche, the American thinker, politician and economist who was an advisor to President Reagan, and was the true father of the Star Wars [Strategic Defense Initiative-ed]. He is the indefatigable fighter, who keeps exposing, in spite of passing the age of 90, the misdeeds of the Transatlantic system which is dedicated to looting and war.

Mr. Lyndon LaRouche was the only one who warned the world about the collapse of the international financial and monetary system. He was also the only one who prescribed the remedy more than a third of a century ago through a unique vision and capability to foresee the future and avoid approaching crises. He is now a reference point for American and international experts and politicians in order for them to make radical decisions to establish a new international economic and strategic order replacing the Bretton Woods System and NATO, an alternative system based on justice, security, and cooperation among the U.S., China, Russia and India, and on constructing networks of roads, bridges and communications among nations. A system based on building relations among nations on the foundation of cultural ties that bring a swift end for the manipulation and looting of other nations, and eventually solving the major crises by resorting to international law. One of the first such crises to be resolved is the current one in the Middle East, through ending the support to the reckless madness of Israeli policies, because, according to his [LaRouche’s] analysis, it has become a threat to international security and peace, and has turned into a focal point for violence, murder, and ethnic cleansing.

Mr. Lyndon LaRouche is also a proponent of every nation’s sovereign right over its resources and wealth, and an avowed enemy of usury, illusive trade, and replacing physical reality with virtual axioms. He is a fierce resistance fighter against financial speculators and their manipulations, because he has always been an advocate of an international system based on physical production of wealth, employment, justice and economic welfare, technological progress, commerce, and opposing the tyranny and imperialism of the transcontinental banks and corporations. These views have been expressed by Mr. LaRouche for more than 30 years through his monthly (sic) magazine {Executive Intelligence Review}, which is published in three languages ({New Solidarity}), and in his newsletter targeting the ruling elites, The {Strategic Alert Service}, and through the American and European parties that propagate his ideas and call for listening to his voice. These stances are exactly what the leaders of Russia, the U.S. and China are aspiring to change their policies to orient with, i.e., a change that means a clean break with the policies of the neocons in Washington and the ambitions of the extreme right wing parties of Europe.

I have known Mr. LaRouche personally for more than 35 years. I visited him frequently in his home in the outskirts of Washington, and his house in Germany, near Wiesbaden, and I met him a countless number of times in European capitals in international economic and political conferences. He joined me in several international committees, like the committee to free Palestinian leader Marwan Al-Barghouthi, and I joined him and his wife, Helga LaRouche, in the international effort to ban violent computer games that plant the seeds of violence and the desire to kill in our children. I still believe that he is one of the American personalities with the most far-sighted vision, the fairest, and the closest person to the issues of the oppressed people of the world. Therefore, he is the most competent to bring back to the American nation its respect and dignity which it has lost in the past decade. I never give up on the possibility of changing the U.S. foreign policy towards the issues of the Arab world, because this is a very likely proposition no matter what President Trump’s improvised positions may be, only if we Arabs realize what the ways and means to reaching that change are. It is not enough to be right. It is equally important to know how to impose that right in the sphere of international relations, where our enemies are imposing their injustice.