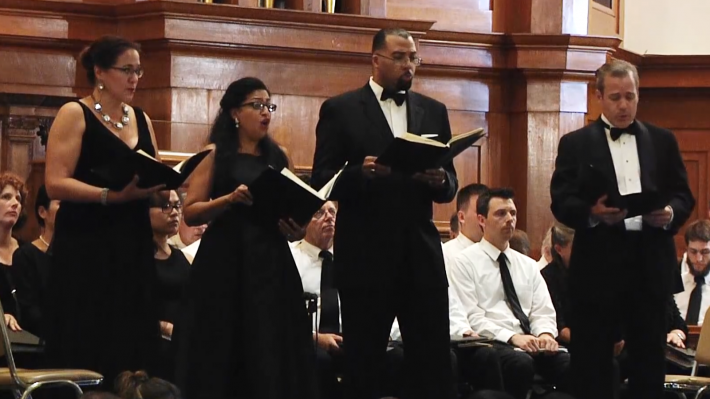 This concert, held at the Presbyterian Church in Morristown, NJ was the fourth of four “9/11 Living Memorial Concerts” to honor all the victims of 9/11 and its aftermath.

Lynn Yen, the executive director of the Foundation for the Revival of Classical Culture (FFTROCC) opened the event, discussing the importance of the occasion, and why the Schiller Institute chose to perform the four African American Spirituals, the Mozart “Requiem” and the Handel “Amen” chorus at the concert. She also introduced Jose Vega, a student with the Foundation, two Islamic leaders in the audience, and Terry Strada, of the 911 Families and a tireless fighter for Justice. Ms. Strada received a standing ovation for her work.

Lynn Yen introduced Terry Strada, saying,” At this point I would like to introduce somebody very special to all of you. Many of you probably know of her. Her name is Terry Strada. She is the national chairwoman of the 9/11 Families United for Justice Against Terrorism. She and her organization were instrumental in the release of the 28 pages of the congressional report on 9/11. Without further ado, I’m going to turn the microphone over to her.”

Address by Terry Strada: 9/11 Families United for Justice Against Terrorism

Terry Strada addressed the hundreds of concert attendees in the church, which was full: “Thank you! Thank you very much! My name is Terry Strada, and I lost my husband on September 11th, 2001. Tom was 41 years old when he went to work that day, and never came home again. We have three children. At the time, they were 7 years old, 4 years old, and our youngest was only 4 days old. 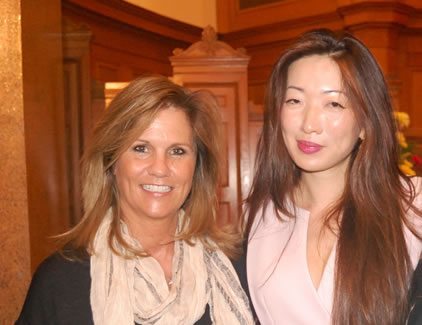 “On September 12th, 2001 I woke up — well, I probably didn’t sleep that night — so when the sun came up, the questions were, “Who did this? Why would they do this?”, and “How could they possibly do this? How could they attack our country like this, and how could they kill so many innocent people in one day?”

“Because I wanted to know the answers, I started to ask the questions more and more. And so did more and more 9/11 families. United to Bankrupt Terrorism was our first title, and now we’re United Together for Justice Against Terrorism. Of course it was the 28 pages that we focused on in the beginning that needed to be released. And when they were released, there were two key things that we learned. One, is that Saudi Arabia has never been fully investigated for the role that they played in 9/11; and two, that it is indisputable that the Saudis played a very important role in 9/11.

The second piece of legislation that I’ve been working on for over four years now, is called the Justice Against Sponsors of Terrorism Act. This bill is intended to fix a minor problem in our current Foreign Sovereignty Immunity Act of 1976. So, it’s a 40-year-old law that has stood for 40 years, until we looked further into the Saudi’s role in 9/11, found the evidence, and tried to hold them accountable.

“What happened next was that the courts decided to misinterpret the law and dismiss them on sovereign immunity. Make no mistake. No country, no entity, no individual is entitled to immunity — sovereign immunity, any type of immunity — in the case of a terrorist act. This bill is intended to hold any nation accountable for a terrorist attack on U.S. soil that kills United States citizens.

People say, “You can’t fight the lone wolf.” I say, “Yes, we can!” If we cut off the funding, and we destroy their capabilities to recruit and incite, and bring on more terror and to brainwash people, we can eliminate ISIS. And that is our long-term goal. The short-term goal, right now, is to get Saudi Arabia off of this crazy [situation] that they’re not held accountable.

“In May, the Senate passed unanimously this Bill, and on Friday, September 9th, it went to the U.S. House of Representatives. I was in the gallery and was honored and proud to see each and every one of our 435 Members in the House vote “Yes” for JASTA. [applause] Thank you, thank you. I don’t really know how many times this has ever happened on our history, that we have both Chambers of Congress voting “Yes” unanimously. What this means for the President: as of 4:00 today, he was still threatening to veto the Bill. The Bill will be sent over to his office for signature later on tonight, at the latest tomorrow. We’re doing everything we can to convince him to not do this.

You probably hear things in the news — and I’ll kind of wrap this up, because I want to hear the music as badly as you do — but you may hear in the news, things about the Bill. They’re simply not true, if they’re coming from the Administration. Unfortunately, they are the mouthpiece for the Saudis at this point. We just need to point out to them how important this is, to hold them accountable — any nation, going forward — would be held accountable, and how important it is for our country to have that type of security net.

“If the President does decide to veto this Bill, it will be our last hurdle; it may be our biggest. But we plan to overcome it, and override the veto. Hopefully the Senate and the House will fall into line and do that for us.

“If there’s anything that you’d like to do to help, going forward, it’s PassJasta.Org.  That’s our website. It’s updated as often as I can get to a computer and update it. There are usually just simple instructions of how you can reach out to the White House, your Representative, or a co-sponsor of the bill. This is very important legislation. I thank you very much for taking the time to listen to me, and now I’m so honored to have these wonderful musicians. I have heard them practice. You are in for a treat. This is going to be a very wonderful time now for us to just transcend ourselves from the evil, to a higher place — to a place where Good is. I believe Good will win, and I thank you for coming.”