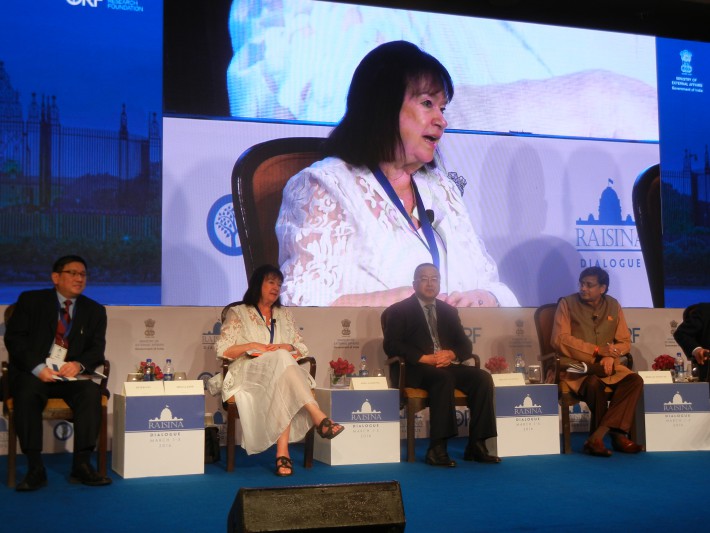 March 2, 2016 (Schiller Institute)–Helga Zepp-LaRouche, founder and Chairwoman of the Schiller Institute, spoke today in New Delhi at the Raisina Dialogue, co-sponsored by the Indian Ministry of External Affairs and the Observer Research Foundation. The two-day conference is described by its organizers as being “designed to explore prospects and opportunities for Asian integration as well as Asia’s integration with the larger world.” The event hosted more than 100 speakers from over 100 countries.

MODERATOR: Now we have Mrs. Helga Zepp-LaRouche to speak on the Chinese Belt and Road initiative…. You have the floor.

HELGA ZEPP-LAROUCHE: Well, thank you very much. I want to thank the organizers of this very distinguished forum to give me the opportunity to speak. Because I think most people know that mankind is in one of its most severe crises, and maybe the most important crisis in all of our history. The strategic situation is described by many analysts as more dangerous than during the height of the Cold War, which was the Cuban Missile Crisis; the trans-Atlantic financial system is headed for a new crisis, worse than 2008; and the refugee crisis in Europe is really not only a tremendous humanitarian crisis, but it is about to explode the EU.

Now, the question is, are we as a human civilization capable of changing wrong policies which have led to this crisis, or are we doomed to repeat the mistakes which have led, due to geopolitics, to two world wars in the 20th Century? But fortunately, we are also witnessing the emergence of a completely new paradigm. Under the leadership of the BRICS countries, a completely new set of relations among states is developing, based on mutual interest, economic cooperation, and collaboration in future-oriented, high-technology areas, such as thermonuclear fusion, the research into space, and therefore a deeper understanding of the physical principles of our universe.

The Chinese New Silk Road program, One Belt, One Road, is offering the Chinese economic miracle to be repeated in every country which wants to cooperate in this win-win perspective. Already 65 states are participating in this new model of cooperation, and it is in the process of overcoming geopolitics, and with that, the source of war, potentially forever.

The new agreement between U.S. Secretary of State Kerry and Russian Foreign Minister Lavrov concerning a ceasefire for Syria, is potentially a game-changer for the entire strategic situation, provided that especially Russia, China, and India immediately work with the countries of Southwest Asia to implement a comprehensive build-up program, not only for the war-torn countries of Syria, Iraq, Afghanistan, but for the entire region from Afghanistan to the Mediterranean, from the Caucasus to the Persian Gulf. And with the trip of President Xi Jinping to the region, to Iran, Egypt, and Saudi Arabia, the extension of the Silk Road is now on the table.

The Schiller Institute published a 370-page study with the title, “The New Silk Road Becomes the World Land-Bridge,” which is already available in Chinese, in Arabic, and soon in Korean, which is a blueprint for a comprehensive build-up of the whole world economy. It contains a very concrete plan for Southwest Asia. So this region, between Asia, Europe, and Africa, has a huge development potential, with great human and natural resources, and it is uniquely located.

The Five Seas strategy announced in 2004 by President Assad can still be a reference point for an infrastructure net between the Mediterranean Sea, the Indian Ocean, the Red Sea, the Caspian Sea, and the Black Sea, making this region potentially a prosperious hub, for the vast increases of trade between Asia, Europe, and Africa. Two major development corridors, one east-west, and another one north-south, will not only include integrated fast train systems, highways, pipelines, water projects, industries, and agriculture. With modern technologies, such as nuclear energy for the desalination of vast amounts of ocean water and the ionization of moisture in the atmosphere, we can green the desert and reconquer large areas of the desert for agriculture and human habitation. The New Silk Road, which already extends from Chongqing and Yiwu to Tehran, where the first Silk Road train arrived three weeks ago, can be extended from there via Baghdad, Amman, Aqaba, and then continue through a tunnel to Sharm el-Sheikh in the Southern Sinai to Cairo. The route crosses the Euphrates River, where ancient travel routes can be transformed into modern corridors, from the Basra port in Iraq at the Perusian Gulf, northwest to Aleppo. Existing railroads along the Euphrates in Iraq and a railroad between Aleppo in Syria and Deir ez-Zor on the Euphrates, should be modernized, and a new line from there to Baghdad connecting the main arteries of the Silk Road should be built. Again, this corridor should not just be rail, but should integrate transport, energy production, distribution, communications, and create the conditions governing the location for the development of industry and new cities. A land route to India connecting the Iranian rail network up to Zahedan on the Iran-Pakistan border, is on schedule to be completed. Other lines, for time reasons very briefly: from Deir ez-Zor to Tadmor-Palmyra to Damascus and Beirut. A north-south link from Syria to the industrial zones of the Suez Canal; a north-south railway from Damascus to Mecca and Medina; a tunnel under the Bab el Mandeb Strait from Djibouti to the Arab Peninsula, and links to Europe, the Black Sea, and Russia. India has good relations with practically all the countries of the region and has been asked already by Russia and China, to play a mediating role in such a developing perspective. As Prime Minister Modi said, 65% of the Indian population is under 35 years of age, and that is the greatest asset of the country.

These youth must be not only given a vision, to help to increase the productivity of Indian agriculture through the use of power, water, fertilizer, high-variety seeds, and so forth, so that the number of working people as farmers can be halved and that land be used for a build-up of infrastructure. But the youth of India can also be inspired to take it as their own mission, to participate in the economic transformation of Southwest Asia and Africa, and in this way, be part of creating a future for all of mankind. The realization of such a development perspective, is the only way how to end the refugee crisis and revive the economies of Europe and the United States, and to develop all of Asia. [applause]

For the first time the Indian Ministry of external affairs hosted together with the Observer Research Foundation (ORF) the Raisina Dialogue in New Delhi from the 1st to 3rd of March 2016.

The conference, with over 600 guests from over 100 nations, focused on Asia’s physical, economic, human and digital connectivity as well as the needed international partnerships to address the challenges in this century effectively.

The participation of speakers involved policy and decision makers, including cabinet ministers from various governments, high-level government officials and policy practitioners, leading personalities from business and industry, members of the strategic community, media and academia. Among the inaugural speakers were the Ministers of Foreign Affairs from Bangladesh and India, Abdul Hassan Mahmood Ali and Sushma Swaraj, and several former presidents: Hamid Karzai (Afghanistan), Chandrika Bandaranaike Kumaratunga (Sri Lanka), and Sir James Mancham (Seychelles). Furthermore the conference was addressed by the Indian Foreign Secretary S. Jaishankar, several other ministers of India, as well as Li Zhaoxing, former foreign minister of China. Ding Guorong, Senior Vice President of the Silk Road Fund, as well as many other incumbent and former politicians and last but not least the founder and head of the Schiller-Institute, Helga Zepp- LaRouche.

Under the title of “Wither European Union” the panelists, among them two members of European parliament dealt with the challenges of the Euro-zone with the refugee crisis and terrorism. Most of them blamed the lack of solidarity among the member states as the core reason to the crisis. In the Q&A session Helga Zepp-LaRouche could intervene by bringing in the only way how to solve the refugee crisis, the kind of Marshall Plan to rebuilt the whole region which was destroyed by all these wars. Even though the panelists did not respond directly to it, it made a huge effect and was brought up by another speaker later in the afternoon and in different side discussions. In her speech in the panel “Connecting a Continent: An Asian Union” Helga Zepp- LaRouche elaborated that idea in a much bigger context of the New Silk Road Process as the only means to avoid thermonuclear war. In the Q&A session she was able to elaborate her on her remarks and uplift the discussion into the strategic outlook.

Throughout the proceedings of the event many thankful and concerned people asked Mrs. Zepp-LaRouche to elaborate more on the issues she raised, especially on the war danger and the New Silk Road initiative.

Other panels included topics as “Asias Strategic Order”, which addressed the role of nuclear weapons vis-a-vis stability in the region, or “Waters of Asia”, which dealt with the transnational development of river basins and implications of energy corridors and international waterways. There were also several panels on different security items, one focussing on asymmetrical and sub-conventional security threats from state and non-state actors and how to respond to these.

The program to the conference can be found at: http://raisinadialogue.org