Concerning the Fate of the Nation 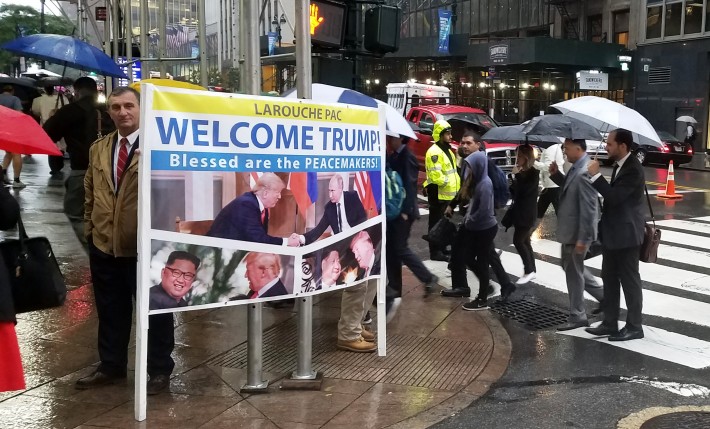 Concerning the Fate of the Nation

The following talk was given to an audience in Detroit, Michigan, on Saturday, September 29th.  It is being specially released for distribution at the United Nations, for the purpose of inoculating responsible diplomats, elected officials, members of the press and representatives of NGO and other organizations against being “bamboozled” into supporting the ongoing attempted coup against the Presidency of the United States and its duly elected representative, Donald Trump.

Urgent matters of war and peace, including the danger of thermonuclear conflict, are being successfully addressed for the first time in recent history, in an extraordinary diplomatic process involving Russia, China and the United States. This is best expressed in the momentous developments involving the ending of the 65-year-old Korean conflict, and the advance of a treaty between Russia and Japan to end the Second World War. These developments are due to the Trump Presidency, and are the first substantive victories in a campaign to reverse the doctrine of “preventive war” first launched by Great Britain’s Tony Blair “Responsibility To Protect” speech at the Chicago Board of Trade in 1999. Similar actions have been proposed for other areas of the world, but are being prevented through the means, “legal and otherwise,” detailed in the presentation by author Barbara Boyd below. The Presidencies of both George W. Bush and Barack Obama advanced that war agenda, which, had it not been interrupted by the Trump administration, would have inevitably led to a thermonuclear World War Three.

Anyone, anywhere in the world, not actively supporting the ongoing process involving the Trump Administration’s successful campaign to break with the Bush and Obama-era “preventive war” policies, as implemented in Iraq (2003) and Libya (2011), for example, reveals himself or herself to be an advocate of that “preventive war” policy, including “winning thermonuclear war,” as expressed in the “Prompt Global Strike” doctrine adopted by both the Bush and Obama Administrations. Responsible persons and observers in the international arena were reminded of this very real danger of “ultimate war” by the March 1 address of Vladimir Putin to the Russian Federal Assembly. Anyone calling for the impeachment of the President of the United States, at this time, is either a foolish or witting advocate of the impending self-extermination of the human race, through war. All responsible persons on the planet, regardless of political affiliation, or “personalized” view of Donald Trump, must therefore act to prevent such a foolish course of action.

The fairy tale of collusion by Trump with Russia to win the election, was also concocted against the Trump Presidency, well before Trump was even elected, by British Intelligence operatives, particularly “former agent” Christopher Steele and his controllers, including MI6’s Sir Richard Dearlove. This has been thoroughly exposed in previous LaRouche PAC publications readily available. There is, in short, no factual basis for any continued support for that lie, which will, as documents are declassified, become clear even to the morally opaque. The visceral prejudice voiced against President Donald Trump is not based on his faults. One can have many policy disagreements with his administration without claiming that it is illegitimate—which would mean that the U.S. Constitution itself were illegitimate.

The truth is, that the treasonous “anti-Trump” opposition—as opposed to legitimate disagreement, expressed both outside and inside the United States—is fueled by banking and financial interests that are dead set against a US–Russia–China–India partnership dedicated to removing the shadow of British colonialism, and British shadow banking from the planet. As the Trump–Kim “Singapore Model” successfully negotiated and essentially resolved the decades-old Korean conflict, could not the same be done in Southwest Asia, including in Afghanistan, Iran, Syria, Yemen, Israel, and Palestine? True, each situation is different; but, who thought a year ago, at the United Nations, that the Korean situation would have been resolved as it has, along with the cooperation that is emerging between Japan and Russia?

For such negotiations, nations need to know that the President of the United States can deliver on his intentions. This President has proven his intention to stop war. A “Four Powers” agreement, proposed by the United States, for world economic development, to include Russia, China, and India (as well as Japan and other nations where appropriate) simultaneously resolves the American debt and employment crises, prevents war, enriches many other nations, and advances the goals of the Chinese Belt and Road Initiative in ways completely congruent with the “Make America Great Again” mission of the Trump Presidency. That done, any legitimate contenders against Trump, or his Presidential legacy, will have to offer their alternative to this vision of the world, in the proper way: in the electoral arena.

Recognizing the puzzling picture that American domestic politics may present to outside observers, the following report is supplied. The author states:

“Many have told me that there is much confusion in the international community about the situation in the United States and the Trump Presidency.  They are bombarded every day with the British and EU generated propaganda image of Donald Trump: an unhinged bully, an abuser of women, a racist tearing mothers from babies, and, most of all, an authoritarian personality who loves other such alleged monsters. I will tell them that the LaRouche movement is not defending everything Donald Trump says or does; but, it does support the unprecedented opportunity this Presidency represents by attacking and seeking to change the institutions which have enslaved the world in the wake of the death of Franklin Roosevelt. That opportunity will be lost, however, if Trump’s battle against failed globalist institutions is not lifted to the higher level found in the ideas of Lyndon LaRouche.

“I would also ask my international friends, at the same time, why they fell for the positive image of Barack Obama floated endlessly by the same propagandists now attacking Donald Trump… Obama’s disdain for the forgotten men and women of the United States, people destroyed by the Wall Street bailout, which he supported before he was President, and implemented after he was President. He echoed the hatred expressed by Hillary Clinton for the working men and women and those in the middle classes in the United States—“deplorables,” tribalists, people unworthy to engage in public discourse, when he said, “My administration is the only thing between you and the pitchforks.” It was Barack Obama who killed people throughout the world in sanitized targeting sessions every Tuesday, using CIA-produced baseball cards for easy reference.  It was Barack Obama who mocked the black citizens of Flint, Michigan whose water had been poisoned with lead. It was Obama who told a South African assembly of students in Johannesburg that if they sought to possess the same automobiles and air conditioners—that is, to consume the same amount of electricity and the world’s resources—as existed in Europe or the United States, “The planet would boil over.” It was Barack Obama who signed the National Defense Authorization Act into law in 2012, mandating indefinite military detention of anyone anywhere in the world, without charges or trial.

“Trump, because he was completely outside the establishment, had to use the leftover intellectually bankrupt shards of the Bush and Obama Administrations to form his government.  That is why you very often see Trump declaring one thing and his government sticking to simple extensions of the views of Bush and Obama—that, and the insurrection which has been run against the President since he began his term. Those citizens of European and other nations who have suffered through regime-change operations should readily understand what this is all about.

“The way to help the Presidency of the United States make the breakthrough it needs is by defeating the coup and building the movement around Lyndon LaRouche’s Four Laws. Further, we need a New Bretton Woods monetary system to create the breakthroughs in science and technology which will put humankind on its next development platform. If we don’t defeat the coup here, God help the United States and the rest of the world, because you will have put the anarchy and insanity, which I describe below, into power, in the most powerful nation on earth.”