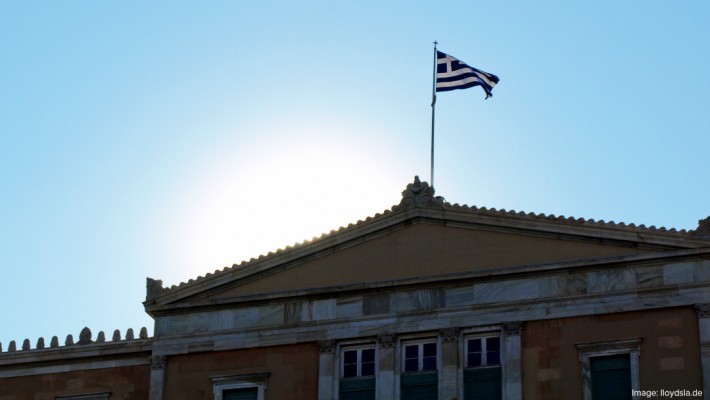 “Put more trust in nobility of character than in an oath.”

The results of Sunday’s Greek elections, in which Syriza won a near-landslide victory and will form a new government with Independent Greeks and other parties, was a stunning and powerful repudiation of the murderous austerity policies imposed on Greece by the Troika.

Upon being informed of the Greek vote, Lyndon LaRouche called it a

“profound victory that can secure a shift in the entire European and trans-Atlantic situation.”

LaRouche noted that the outpouring of the Greek people to repudiate the Troika’s austerity regime was one of several recent developments that can rapidly bring down the failed euro system altogether.  He cited the recent decision by the Swiss National Bank to decouple the Swiss franc from the euro, which triggered significant derivatives losses by major Wall Street and City of London banks.

LaRouche noted that the Greek vote will have a

“big impact on Germany.  Merkel and company are in a tough situation, pretending to control things in Europe, but in reality, they have no control and the Greek vote proves it.  They will be shaken hard, and will not be able to pretend that the austerity policies are working.

This is great, the enemy of humanity is being damaged and everyone should be happy.” 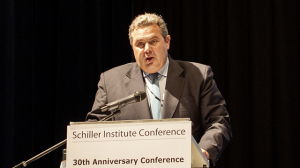 Pannos Kammenos, founder of the anti-austerity party “Independent Greeks”, at the Schiller Institute Conference in Oct. 2014, in Frankfurt.

All of the European finance ministers will be meeting today to decide what to do in the face of the dramatic Greek election results, which further discredit European Central Bank head Mario Draghi’s Thursday announcement of a one trillion euro quantitative easing hyper-inflationary bailout of the bankrupt European banks.  Greece’s action could very well be the catalyst of a stampede for the door, with Greece, Portugal, Spain, Ireland, and even Italy leaving the euro system to return to sovereign currency and anti-austerity policies.

The implications for Wall Street are equally dramatic.  The hopelessly bankrupt Wall Street banks are reeling from massive derivatives losses, triggered by the Swiss National Bank’s sudden ending of the peg to the euro.  Those same banks, along with their City of London counterparts, are holding more than $600 billion in junk bond loans to the shale oil and gas sector, and those debts are about to blow out.  This could very well be the trigger for the disintegration of the entire trans-Atlantic financial system at any moment.

LaRouche has emphasized for the past months that the blowout of Wall Street and London is the single most important factor driving the world to a potential thermonuclear war showdown. Increasingly, more and more sane voices are joining LaRouche in warning of the growing danger of thermonuclear Armageddon.  Over the weekend, leading nuclear disarmament expert Theodore Postol warned about the imminent danger of thermonuclear extinction, and former Senators Sam Nunn and Richard Lugar added their voices to those calling for emergency action to de-escalate the global showdown.

In discussion with colleagues on Sunday, Lyndon LaRouche focused on the urgent measures to be taken to put the Wall Street and London banks through orderly bankruptcy reorganization, starting with the cancellation of all the gambling debts.  He then elaborated on the kinds of Hamiltonian measures that must be immediately implemented to put people back to work in meaningful jobs.

“The important thing is that what we need is a statement, which is to be a general statement, which is to say that we know now that the Wall Street organization is generally not only bankrupt, but hopelessly bankrupt.  Now, therefore, since the Wall Street money, which is actually now worthless, in fact, is gone, we have to provide a source of credit which will be Federal credit, a lawful creation of Federal credit which will be a fund which can be used by the states and by the national government in order to fund, the creation of new employment.  That’s what the issue is.

“Now, the new employment means, employing people in things that they can do, or can be trained to do.  Because you have to have a buffer by which you cannot leave the government and this nation collapsing.  You’ve got to intervene immediately and say: Okay, we’re going to take a debt.  We’re going to incur, — as the United States we’re going to incur a debt; it’s going to be a big debt, it’s not going to be excessive, but it’s going to be a big debt because we must immediately move to put people to work, and to do similar kinds of things now, immediately. And it has to be done on a credit system, which is a Federal credit system.

“Now, we have some history on this thing, which Bill Clinton can respond to, essentially, at least emotionally, because what happened, then, when Bill Clinton left office, what happened, this bail-out business, this crazy operation took over. And so, for a period of four terms of office of the Presidency, and we have ruined everything.  And it was ruined by the people who tried to change the policy of the United States against what Bill Clinton had been working to do.

“Go back to what Bill Clinton had announced in the summer of the year when the attack on him came [1998], he had a policy, as a policy which he endorsed me for doing, for presenting, and that policy can work.  And it was Bill’s idea, of how to organize, because the Russian system was bankrupt, totally bankrupt; and that had an effect upon Europe and everything else, and the idea was to get a recovery program based on the trans- Atlantic region, which would work, to save the economy from what was created by Wall Street at that time.

“And that’s what we have to do, we have to do that now. Because we cannot sit there without a program of that type.  This thing is totally bankrupt, entirely, hopelessly bankrupt.  It’s going to become worse at an accelerating rate.  We have to have a buffer, a Federal buffer, and the old system of government has to take the responsibility of creating that buffer.  And then, the purpose is to put people to work, in productive work.  And we must have that now.”

Watch a founder of the anti-austerity party “Independent Greeks” and coalition leader of the newly elected Greek Goverment, Panos Kammenos, at the Schiller Institute Conference in Frankfurt, October 2014