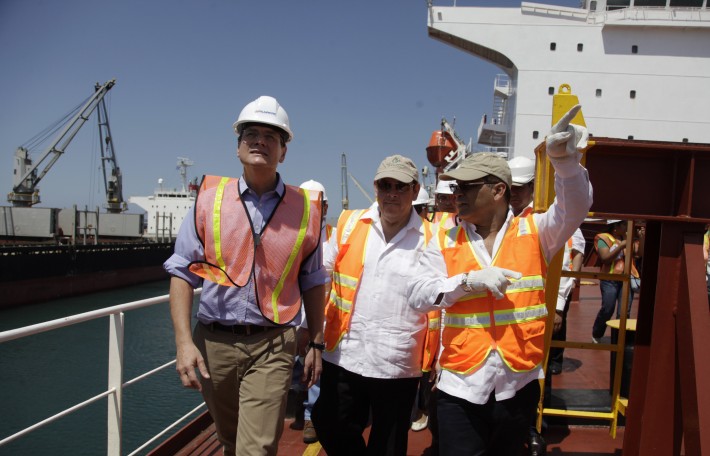 El Salvador Prepares To Get On Board the Belt and Road

Aug. 21 – El Salvador’s President Salvador Sanchez Ceren told a national TV audience last night that El Salvador had broken diplomatic relations with Taiwan and established relations with the people’s Republic of China, in order to fulfill the government’s promise to secure a dignified life for all citizens, and create a future for new generations. He reported that a delegation of three high-level officials, led by Foreign Minister Carlos Castaneda, were in Beijing, and had just signed a Joint Communiqué on the Establishment of Diplomatic Relations with China.

The President did not mention the Belt and Road Initiative in his speech, but Panama’s eager participation in the BRI, after its decision to break with Taiwan in June 2017, has sparked discussion throughout Central America on prospects for increased integration and actually crushing poverty, drugs and violence. In point of fact, El Salvador’s move in the direction of the BRI is the single most important action it could have taken to stop the scourge of drugs and Satanic gang violence which, along with Wall Street looting, has driven over 20% of 1st generation Salvadorans to emigrate desperately to the U.S.

El Salvador has been looking for some time for international assistance to relaunch its container port at La Union in the Gulf of Fonseca on the Pacific, and China has expressed interest in the project. The initial concept for the La Union port was to turn the Gulf into a development hub with Nicaragua and Honduras, which also border the Gulf, and to connect it to the Caribbean through a railroad across Honduras. At the same time, the high-speed railroad in Panama which China has agreed to build has sparked active discussion in Costa Rica, El Salvador, and Honduras, minimally, of building a regional railroad, {EIR} has learned.

El Salvador’s decision increases the potential for other Central American countries–Honduras, Nicaragua, and Guatemala, in particular–to also leave the “Taiwan Gap” and enter the future. President Sanchez Ceren had met with the Presidents of Honduras and Guatemala earlier in the day, on the occasion of his nation joining the Customs Union which those two nations had created, bringing the 32 million people in those three countries — 73% of all of Central America’s population — closer together.

“I am speaking to you on this occasion to make public a decision which will have a profound impact on the present and future development of our country,” President Sanchez told the nation. When he was inaugurated, he explained, he promised to create the conditions needed to transform the nation towards securing a decent life for each one and their families, and after analyzing the domestic and foreign situation, we have made the decision to break relations with Taiwan and establish relations with the P.R.C., he explained.

This is a decision which will bring “great benefits to the country and offer extraordinary opportunities on the personal level to each of you. The People’s Republic of China is the second economy in the world, in continuous development, and whose development achievements in diverse fields has enabled it to position itself among the most successful countries,” he said, citing China’s promotion of “shared development … in countries such as ours through South-South cooperation.”

Sanchez reported that dialogue will immediately begin between the two countries to identify “potentials and concrete actions in the areas of trade, investment, infrastructure development, scientific, economic and technical cooperation, in health care, education, tourism, and support for micro and medium-sized companies,” as well as coordinating immediate humanitarian aid for Salvadoran farmers affected by drought.