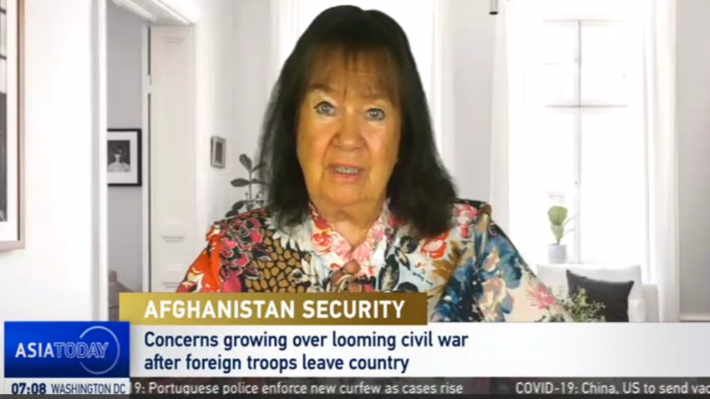 Helga Zepp-LaRouche was interviewed by Zhong Shi today, the host of the “Asia Today” program on CGTN, as part of its lead coverage on the crisis in Afghanistan.

Zhong Shi: I want to now also bring in Helga Zepp-LaRouche, the president and founder of the Schiller Institute, a German-based political and economic think tank. Mrs. Zepp-LaRouche, welcome to the program. It’s a pleasure to have you on today.

The Pentagon says returning Bagram base to Afghan security forces was a key milestone in U.S. military withdrawal. Now, the question is, what type of milestone will this be for Afghanistan? How will this affect the country’s ability to fight against the Taliban?

Helga Zepp-LaRouche: I think it’s a very serious situation. There is the danger of civil war, not only between the Afghanistan government and the Taliban, but according to Russian Foreign Minister Lavrov, who yesterday pointed to the fact that there are now ISIS forces massing in the north of Afghanistan. I think the danger is that the war will continue, this time with Afghans killing Afghans, so I think it does require some other approach. Something completely different than just withdrawing and leaving the place as it is.

Zhong: The world is now watching the situation unfold in Afghanistan. We know the Taliban certainly has been sweeping into districts as foreign troops go home. When the United States watches what is happening right now in Afghanistan, how would you characterize Joe Biden’s policy towards Afghanistan after U.S. forces leave? He certainly has promised continued support.

Zepp-LaRouche: Yes, I’m not so sure. Obviously, this is a quagmire. Twenty years of war and lost lives and lost money for nothing. I think that the withdrawal from Afghanistan has similar reasons like the United States reducing logistics in other parts of the Persian Gulf. It’s in part, in my view, this focus on the Pacific, on Russia, on China. So per se, it’s not an Afghanistan policy, but it’s more a policy led by geostrategic considerations. I think this is a path to disaster as well.

Look, Afghanistan in the last year, the opium production increased by 45%. Afghanistan produces 85% of the world’s opium production. If you just leave that, the Taliban will for sure increase that production as a way of financing their military operations. The deaths will be in the streets of the United States and Europe, of the many addicts. In Afghanistan, there are 3.5 million drug addicts, but that just shows that you need to have a completely different approach to solve this problem.

Militarily, Afghanistan cannot be won. That was proven by the Soviet Union trying to win for 10 years, now the United States and NATO for 20 years. I think it’s high time to rethink, that one needs to have a completely different approach than the continuation of the same.

Zhong: As you say, it would be 20 years of a war for nothing, if Afghanistan quickly descended back into chaos; into where it was before the war. Some fear that this is more likely to become a reality once foreign troops are gone. What do you think are the chances that this will happen? That Afghanistan will dive deeper into a civil war?

Zepp-LaRouche: As I said, if nothing is being done, it will be a nightmare. There will be more terrorism, which will spread not only in the region, but beyond. I think there must be a change in the approach. The only way there would be any hope to stabilize the situation is if you bring real economic development to Afghanistan, but also to the entire region, of Iraq, Syria, Yemen, all these countries which have been destroyed by the endless wars. This could be taken as one region, and one should understand that both the problem of terrorism, but also the problem of drugs, is one which should concern all the countries—the United States, Russia, China, Iran, India. They should all work together for an economic development perspective. One could extend the Belt and Road Initiative, the New Silk Road. The previous president, Karzai, saw that he sees the only hope for Afghanistan would be development. And the new name for peace is development, also in Afghanistan. So, my wish would be that this could become a subject of a UN Security Council special conference. President Putin has demanded, in any case, that the Permanent Five of the UN Security Council should meet. That would be one of the urgent items; how to prevent Afghanistan becoming a source of terrorism, drug trafficking, and just a nightmare for everybody. And how can you stop thinking in terms of geopolitical confrontation, and concentrate on the common aims of mankind? I think Afghanistan is one of these absolute crossroads—it is a crossroad—but also a crossroad in the history of mankind.

Zhong: This is more of a pressing issue by the day. Helga Zepp-LaRouche, we appreciate your analysis today; thank you so much for taking the opportunity to talk to us.