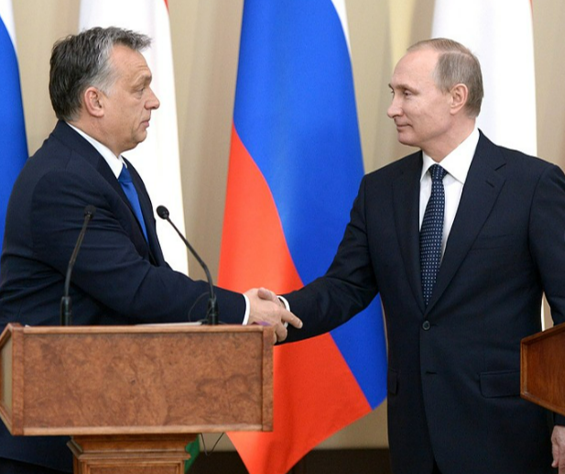 Feb. 2 (EIRNS)–President Vladimir Putin informed Hungarian Prime Minister Viktor Orban during their joint press conference after meeting in Moscow yesterday, that he had confirmed that Russian Railways could provide $2 billion in additional funding to help finance the construction of railway line V0, the Hungarian bypass around Budapest that is to connect Hungary’s border with Ukraine to the border with Austria—a key connection for Hungary intention to become a key center for Belt and Road cargo coming from China, through Russia, into Europe.

The project was a major point of discussion between the two Presidents. As Orban reported, “Hungary made a big investment in the construction of a terminal on its border with Ukraine. This cutting-edge terminal is capable of reloading goods from trucks much faster than any other facility of this kind. This is a tremendous opportunity. We discussed the formation of a Russia-Hungary joint venture on shipments … [which] will improve the Hungarian economy and will allow us to use Hungary’s good geographical location. It is suitable for transport routes, pipes, roads and railways.”

The “Railfreight” site summarized the  project on January 31st: “Hungary is moving fast to gain its position as a transit country on the New Silk Road. In Fenyestlitke, a city close to the border with Ukraine in the Záhony region, a state-of-the-art terminal is currently under construction and expected to be operative in April….

The role of Hungary on the Eurasian corridor has been acknowledged by Russia and Austria. In December, the three countries formed a joint venture that will take the role of freight forwarder and logistics provider on the New Silk Road. The partnership consists of Russian Railways Holding, CER Cargo Holding (Hungary) and Rail Cargo Group (Austria).

The focus of the newly formed team will be on cargo transportation from Chinese provinces to South Europe and Balkan countries, through Russia and Hungary and backwards. The route via Ukraine will be of particular importance, as this route serves that particular part of Europe on the Eurasian corridor. (For more information and details see: http://en.kremlin.ru/events/president/news/67690, and https://www.railfreight.com/beltandroad/2022/01/31/russia-sides-with-hungary-in-building-budapest-bypass/, and https://www.railfreight.com/specials/2021/10/15/hungary-back-on-the-map-with-replenished-border-area.)