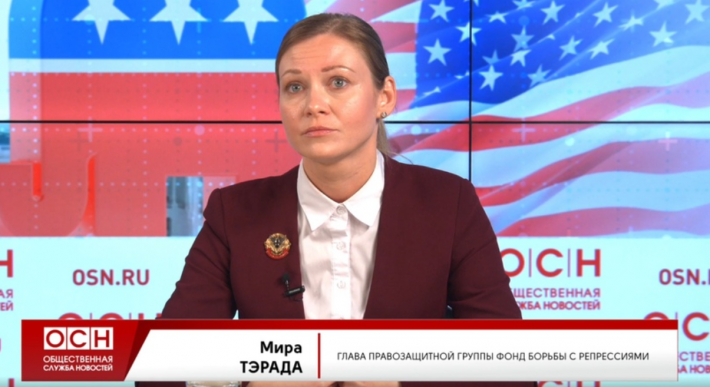 December 10, 2022by David Dobrodt in General

On December 1, 2022 the Moscow based Foundation to Battle Injustice held a press conference on the issue of election fraud in the United States. The press conference, moderated by the Foundation’s chairwoman Mira Terada, featured U.S. Senate candidate from New York Diane Sare, Schiller Institute spokesman Harley Schlanger and independent American journalist John Mark Dougan. Dougan, a former Marine, deputy sheriff and computer specialist, is currently based in Moscow where he hosts a regular podcast focused on the war in Donbas.

Mira Terada began the press conference by asserting that because of election fraud American democracy is facing its most grave crisis in modern political history. She discussed how the Covid-19 crisis opened the door for states to make radical changes to their voting procedures, particularly massive expansion of mail-in voting. This combined with dubious “malfunctions” with electronic voting machines and delays in vote counting, sometimes lasting up to a week or more, provides ample opportunity for vote manipulation. She then reported on specific examples of various voting irregularities which occurred during both the 2020 and 2022 elections. Terada finished her remarks by stating that “Fraud, distortion and manipulation of the voting process in favor of the same party clearly indicate a violation not only of the Universal Declaration of Human Rights, but also of the Declaration on Free and Fair Elections adopted by the Inter-Parliamentary Union in 1994 and signed by the United States.” She and her colleagues believe that “regular suppression of voters is an illegal measure unacceptable in the 21st century, which contradicts the norms and traditions of a truly democratic society.”

Diane Sare spoke following Ms Terada’s opening remarks. Sare began her comments by recounting the enormous effort her campaign had to make, because she was running as an independent, just to get her name on the ballot, which required 45,000 valid petition signatures gathered in a six week period. Her primary message to New York voters was that nuclear war with Russia and China is not good for the economy. Despite the fact that hers was the only independent campaign to meet the petition requirement, gathering 66,000 valid signatures, she was excluded from the only candidates’ debate. The reason given for her exclusion was that based on polls, she had less than fifteen percent support amongst likely voters. Not one of the polls used for the debate even mentioned Sare’s name as a candidate, and some supporters reported that they were told by the pollsters that Sare was not an option.

Sare then showed the now famous screenshots of her votes mysteriously diminishing from 55,000 on election night down to 25,000 the next morning. In Rockland County, Sare’s county of residence, her vote total election night was 6,212 or five percent. The next morning the count was 277. The question she asked was why would such an obvious fraud be perpetrated in broad daylight? Was this a “Straussian lie” in the tradition of the University of Chicago’s arch neocon Leo Strauss, the purpose of which is to demoralize people and make them feel powerless and impotent because everyone knows it’s a lie but no one has the courage to refute it? Sare’s attitude is that this blatant fraud makes her more determined than ever to fight and she has already declared her intention to run for the Senate in 2024.

Sare ended her presentation by bringing attention to the recent election in Taiwan, where people voted overwhelmingly against war with China. The financial elites don’t want a similar surprise in the United States where the majority of people, like the Taiwanese, want peaceful relations with Russia and China. This is why it is so important for them to control the media, the election outcomes and what people perceive is the view of the majority of Americans.

Harley Schlanger was the next speaker and began his presentation by stating his intention to give the “bigger picture.” The fact is there have always been allegations of vote fraud in the United States, particularly in the 2000, 2016 and 2020 elections. However, to understand how this fraud is carried out one must look at the CIA and NSC because they’ve been rigging elections all over the world for many years. The investigations into the 2020 election vote fraud failed because they were approached from a local level. The question is: how are elections manipulated so that both political parties maintain control over the government? The way this is done is by preventing any serious issues from being presented to the American people by either party; only narrow issues are allowed which are acceptable to the ruling forces.

According to Schlanger, during the recent midterm elections 75 percent of the American people believed that inflation, the economy and the war danger were the most important issues. But instead of addressing these issues, candidates focused on identity politics: race, gender, abortion and local issues. Putin was blamed for high energy prices and inflation. (If your dog got pregnant, Putin did it.) So the reason there was no big “red wave” as many pundits predicted was because the Republicans did not present any real alternative to the policies of the Biden administration. Schlanger said that because of this suppression of debate on important issues we have ignorant people with no idea what the candidates for whom they vote stand for. People are completely unaware that the United States and NATO are pushing for war with Russia. And this was the primary reason Diane Sare’s campaign was suppressed, because even one voice speaking truth can break the power of the oligarchy.

The final speaker, John Mark Dougan, spoke on the more technical aspects of vote fraud. He began by stating that the United States since 1950 has interfered in more than fifty foreign elections and that now U.S. intelligence agencies are interfering in our own elections. One of the ways this interference is perpetrated is with electronic voting machines. The software for these machines, according to Dougan, uses algorithms which are “weighted” for a particular outcome, similar to the big tech companies which use similar algorithms to determine what content people see on social media platforms. This is why the software is “closed source” and cannot be subjected to forensic analysis. Dougan suggested that Sare take this into consideration when investigating how her votes were disappeared.

Time constraints allowed for only a couple of questions during the question and answer period which were directed to Diane Sare. One of them was whether Sare was planning to take legal action to try to resolve the issue of what happened with her vote. In response, Sare expressed her doubts that the courts would address this, but that rather we have to build a movement for political change. She discussed a group she worked with during her campaign called Citizens Audit which demonstrated how elections in New York are rigged. The Sare campaign and Citizens Audit tried to file an injunction prior to the election based on this election rigging evidence but were unable to find even one lawyer willing to take on the case. Why? Because in the wake of the January 6 investigation, people are afraid they will be ostracized like Rudy Giuliani, who was disbarred from practicing law in New York for questioning the 2020 election results. Also, look at the case of Julian Assange, who could tell the truth about the source of the Hillary Clinton email leaks if U.S. and British intelligence agencies were not trying to kill him. Current policy is decided by the intelligence agencies and there has to be a movement of people in the United States where justice is done. This also relates directly to the case of Lyndon LaRouche who was unjustly convicted for political reasons based on fraudulent charges, while running for U.S. President, and spent five years in jail as a result.