Video: The Actuality of Krafft Ehricke’s Vision — ‘Lifting the Human Species Out of Its Ordinary Existence’ 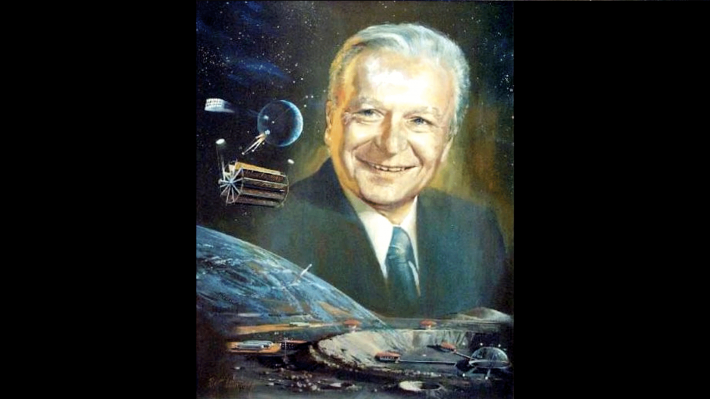 Video: The Actuality of Krafft Ehricke’s Vision — ‘Lifting the Human Species Out of Its Ordinary Existence’

Helga Zepp-LaRouche was a speaker on the July 7, the first day of a three-day Space Renaissance Art & Science Festival in Berlin, addressing “The Actuality of Krafft Ehricke’s Vision.” [See draft transcript in Documentation.] The conference was sponsored by the Space Renaissance International, an organization that was set up by some Krafft Ehricke space enthusiasts in Europe and the United States. They had initially invited Marsha Freeman to speak about Ehricke based on the work she had done about (and in cooperation with) him. Unable to attend in person, she recommended that they invite Helga Zepp-LaRouche, with whom Ehricke had worked and who had written such a moving speech on him at the Krafft Ehricke Memorial in Washington in 1985. The person she was in touch with was very enthusiastic about the opportunity of having Helga speak and was quickly put in touch with her.

She spoke about Ehricke’s legacy, outlining his achievements in space engineering, but laying emphasis on his philosophy of man, quoting extensively from Ehricke’s works, Anthropology of Astronautics and his “Three Laws of Astronautics.” She also described Ehricke’s work in ridiculing the zero-growth insanity that was flourishing in the 1970s with the Club of Rome and Global 2000 report.

She detailed in particular Ehricke’s observations on how a person’s view on life can change when under different circumstances. The goal today was to effect such a change in a population that feels itself downtrodden and pessimistic, she said. Such a change of perspective can occur when man begins to colonize the Moon and goes to Mars, people will begin to view humanity from a higher standpoint, as a spacefaring species.

The role of those involved in space is to bring such a paradigm shift to the population—astronauts going out to the schools and the universities and encouraging people to “look to the stars,” and look a hundred years ahead and beyond. People used to think that traveling 50 km per hour would be very dangerous, she said. Now China is working on maglev trains that will travel 600 km per hour, and people will accustom themselves to the new paradigm.

While she was showing the audience the painting of Ehricke’s Selenopolis, the design for a city on the Moon, she expressed that Ehricke’s vision was not simply to build a city or a village on the Moon, but to prepare the basis for travel into the galaxy and beyond, citing Ehricke’s unfinished work on Interstellar Relativistic Space Travel.

Her presentation also provoked an interesting discussion, and she was warmly received by the organizers and the audience. The moderator of her panel was Bernard Foing, who was also very excited by Mrs. LaRouche’s presentation. Foing was the Chief Project Scientist for ESA’s SMART mission to the Moon, and is the Executive Director of the International Lunar Exploration Working Group (ILEWG) and the president of Space Renaissance International.

The full video of the proceedings is available here https://www.youtube.com/watch?v=Tz80F6TczJQ&t