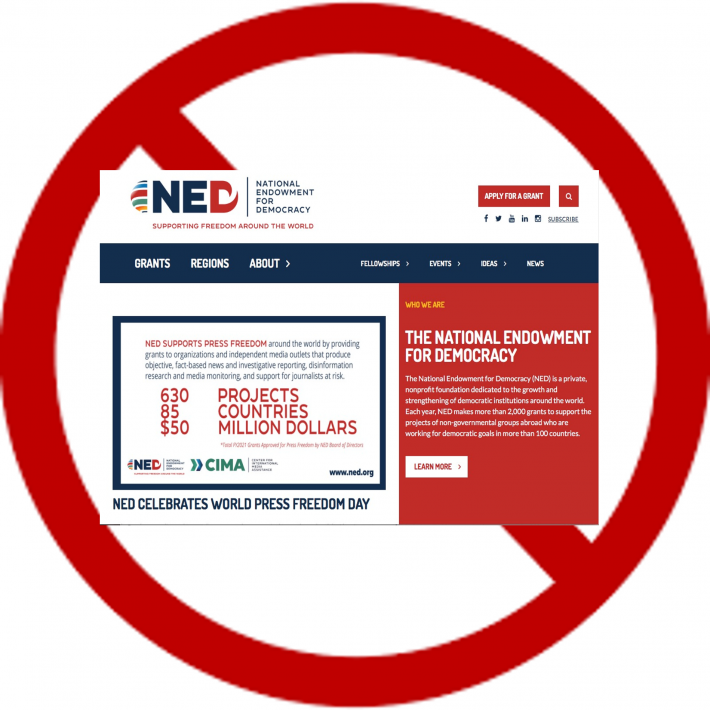 May 7, 2022 (EIRNS)–In a move meant to kill “many birds with one stone,” the Chinese government has released a “Fact Sheet on the National Endowment for Democracy.” The “Fact Sheet” explains how the Cold War CIA operations in undermining foreign governments were transformed into this public-private mechanism labeled as an “NGO,” to interfere in the internal affairs of other countries and shape the policy of these countries to bring them in line with U.S. geopolitical goals. It then goes through country by country to document NED’s operations to foment color revolutions and overthrow popularly elected governments which didn’t see eye-to-eye with the United States. These include a rundown of NED’s operations in Poland (Solidarnosc), Georgia, Russia, Ukraine, Belarus, Kyrgyzstan, Serbia, and Mongolia as well as countries in Latin America, Bolivia, Nicaragua, Cuba, Venezuela, and Africa, Libya, Uganda, and Sudan, as well as Thailand in Southeast Asia.

The Fact Sheet also runs through the extensive operations NED has conducted against China, including their campaigns for Hong Kong independence, Tibetan independence, and the “genocide” and “human rights” claims in Xinjiang. It also notes NED operations in tandem with Taiwan. Rather than deal with these issues individually, the background to the situation in Ukraine or the nature of the operations in Xinjiang and Hong Kong, the “Fact Sheet” rather focuses on the modus operandi characteristic of U.S. policy in attempting to overthrow governments that would pose any threat to U.S. hegemony. The publication of the Fact Sheet may also be a preemptive strike against the expected  China Policy Review which was expected to be announced this week by Secretary of State Blinken, which has been delayed following his being infected with Covid. The fact sheet is here.