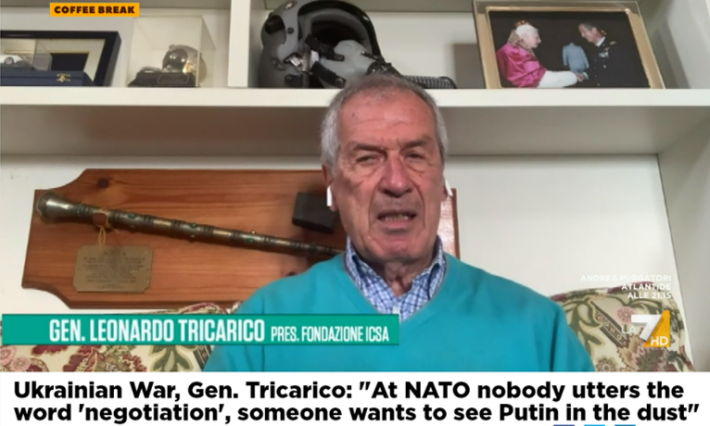 April 16 (EIRNS) – Gen. Leonardo Tricarico, former chief of staff of the Italian Air Force, former deputy commander of the multinational force in the Balkan war (1999) and currently chairman of the think-tank Fondazione ICSA (Intelligence Culture and Strategic Analysis), said the U.S.-UK-NATO axis is working against peace in Ukraine.

“The word ‘negotiation’ has never been pronounced either by U.S. President Biden nor by NATO secretary general Stoltenberg, nor by Secretary of State Blinken, nor by UK Prime minister Johnson. This is very serious, because the first efforts to reach an agreement have occurred in a quite improbable way. I know what I am saying: Biden does not want peace,” Tricarico said in an interview with La7 national TV.

“A serious effort for a major structuring of negotiations has never been made by anyone and especially by the U.S.A. and the UK. If we review all public and non-public statements by the characters I mentioned, we will never find words such as ‘negotiation’ or ‘ceasefire’. Evidently, they do not want peace. If Biden does not want peace, nobody else wants it, because Stoltenberg is the direct resonance room for Biden and the British are even more aggressive and imperative than the Americans. This is the situation; it is useless to dance around it: Biden wants Putin in the dust.” (The full interview is found here.)