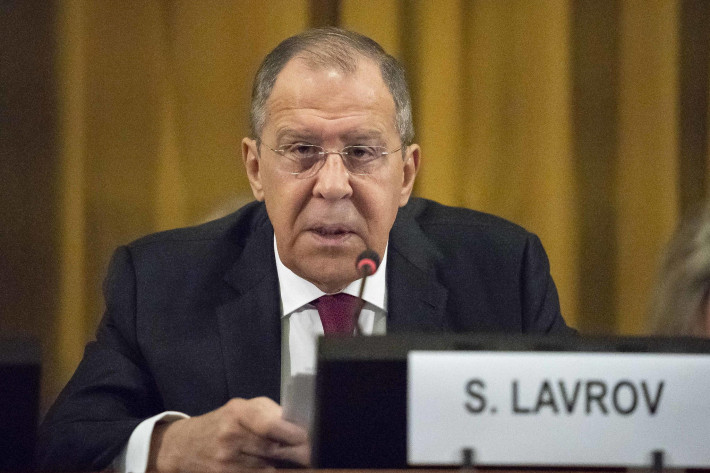 March 26 (EIRNS)–Russian Foreign Minister Sergei Lavrov, during a meeting of the Gorchakov Public Diplomacy Fund in Moscow, charged that the US/NATO/EU combination is already waging a hybrid war on Russia and that its objectives are no different from those of Hitler in 1941. “Today we have been declared a real hybrid war, a total war,” he said, adding that the latter term “was used by Hitler’s Germany” and “is now voiced by many European politicians when they talk about what they want to do with the Russian Federation.” The goals are not hidden, they declared them publicly – to destroy, break, exterminate, strangle the Russian economy and Russia as a whole, he remarked.

Lavrov lashed out at the “sanctions spree” against Russia pointing out that it is becoming clear that all values that those in the West have been preaching to Russia, like freedom of expression, a market economy, the sanctity of private property and the presumption of innocence, are not worth a red cent.

In this environment, the Kiev regime is being encouraged to continue to behave badly. Lavrov charged that the Kiev regime, in fact, has been getting away with bad behavior for years, with complicity of the Western corporate news media, particularly with respect to its crimes in the Donbas region. “All throughout these years, when the Ukrainian leadership evaded its obligations under the Minsk Accords, nationalists were openly wiping out civilian facilities, schools, hospitals. It was well-known and all facts were regularly reported by our mass media but were swept under the rug by the Western media,” Lavrov said. “It included the slaughter of civilians, and you may all know well that the death toll among the population exceeded 10,000,” he noted. “No one in the West cared at all about the inhumane economic, trade, transportation or food blockade of the self-proclaimed Donetsk and Lugansk People’s Republics.”

The Kiev regime’s bad behavior has extended into the Russia-Ukraine talks as well. Russian presidential aide Vladimir Medinsky, the head of the Russian delegation at the Russia-Ukraine talks, accused the regime of seeking to drag out the talks. “They are in no hurry, obviously thinking that time is on their side, and say it openly that they have many decision-making centers they have to agree on these or those solutions with. This is the reality we are in,” he said, reported TASS. “Regrettably, as far as we understand – they make no secret of it, they are limited in making independent decisions. So, the current state of things inspires little optimism,” he stressed, adding he doesn’t share the Ukrainian delegation’s optimism, when it speaks about “great progress.” Further he said that “So far, there is no progress on matters of principal importance that the Russian side insists on.”