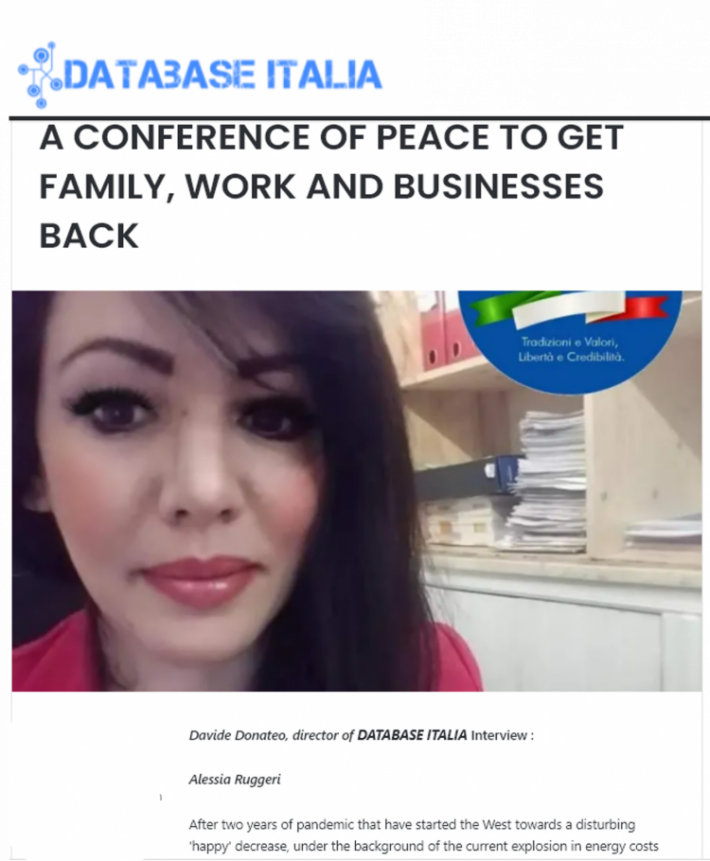 MILAN, March 22, 2022 (EIRNS)—Three VIP signers, from Italy, of the Schiller Institute petition for a new security architecture, Alessia Ruggeri and journalists Luca La Bella and Gianmarco Landi, were on a program of DataBase Italia TV last night, entitled “The End of Globalization.” After describing the present situation in Ukraine as very different from how the mainstream media portray it, including the use of hypersonic missiles by Russia, which can put a quick end to the war and destroy the military potential of the neo-Nazi militias, host Landi quoted Helga Zepp-LaRouche and the Schiller Institute petition for a new security architecture as the only alternative to the danger of a general war, and asked Alessia Ruggeri to talk about it, as she had already in a recent interview on the Schiller Institute petition published by DataBase Italia.

Alessia Ruggeri explained that it is a very important petition, which was signed by thousands of citizens and many VIP signers from all over the world, and which calls for the principle of the Peace of Westphalia to put an end to the geopolitical confrontation policy and the failed economic policies which led to this war. She emphasized that what is being shown on TV is not the real situation, and that people are not aware of the severe consequences of the boomerang sanctions which are hitting Italy, and other countries, much worse than the Russian economy. For example, she quoted the shutting down of all McDonalds restaurants in Russia, which was quickly converted into a Russian brand to save jobs.

She also reported many mail messages she receives about hoarding of pasta and oil in Italian supermarkets, noting that people believe that wheat is produced in Italy but is not—it comes from Russia and Ukraine. She reminded viewers (around 3,000 last night) that as a result of the failed economic policies of the West, many businesses are shutting down, but as a mother of two children and a trade unionist she called on small entrepreneurs, like the ones in Southern Italy, “not to give up hope, there is a possibility for a change.” The full program is available here.