Xi Jinping Insists No Nation Is Safe, Unless All Are 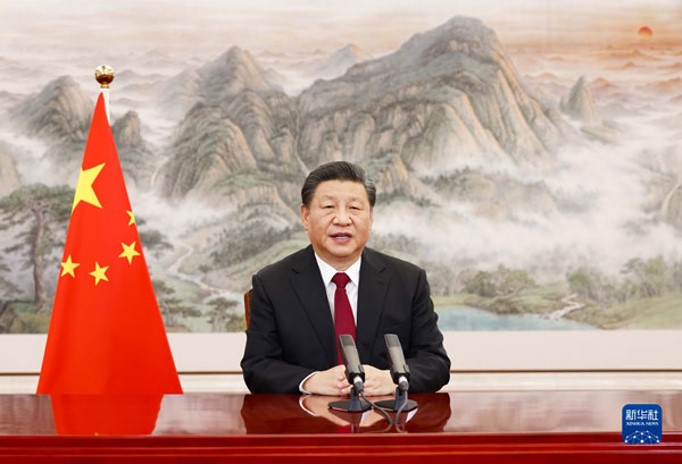 Xi Jinping Insists No Nation Is Safe, Unless All Are

Jan. 18, 2022 (EIRNS)—Chinese President Xi Jinping’s address to the World Economic Forum on Jan. 17 challenged every tenet espoused by that Malthusian nest. His message was blunt: we are in the midst of a world crisis in which no nation can survive, nor can any individual part of the crisis be resolved, unless humanity moves forward as a whole. Xi, through multiple Chinese metaphors, argued that nations must act together to implement a “people-centered philosophy of economy,” which places “development and livelihoods front and center,” if the kind of “high-quality development” required to end the pandemic, poverty, and conflict is to be achieved.

Let Wall Street and the City of London scream “communist propaganda!” Americans who know their own history will take heart upon hearing that China’s President lectured the financier parasites on how humanity can emerge from today’s Dark Age by applying what are essentially the basic principles of Alexander Hamilton’s American System of Economics, which America’s fighting patriot, Lyndon LaRouche, advocated and advanced.

The President argued: “‘The wealth of a country is measured by the abundance of its people.’ Thanks to considerable economic growth, the Chinese people are living much better lives. Nonetheless, we are soberly aware that to meet people’s aspiration for an even better life, we still have much hard work to do in the long run. China has made it clear that we strive for more visible and substantive progress in the well-rounded development of individuals and the common prosperity of the entire population. We are working hard on all fronts to deliver this goal. The common prosperity we desire is not egalitarianism. To use an analogy, we will first make the pie bigger, and then divide it properly through reasonable institutional arrangements. As a rising tide lifts all boats, everyone will get a fair share from development, and development gains will benefit all our people in a more substantial and equitable way.”

Xi made four points. First, that cooperation is required to defeat the pandemic, which has proven protracted, with more variants and faster spreading than before, threatening people’s health and the global economy.

Second, that coordination is required “to turn the world economy from crisis to recovery…. Major economies should see the world as one community, think in a more systematic way, increase policy transparency and information sharing, and coordinate the objectives, intensity and pace of fiscal and monetary policies, so as to prevent the world economy from plummeting again.” Specifically, he warned, if the major economies “slam on the brakes” in monetary policy to fight inflation without developing “new drivers of economic growth,” global financial stability will be shaken, and “the developing countries will bear the brunt of it.”

Third: that global development requires overcoming the “development divide.” The number of poor people in the world “has increased by over 100 million. Nearly 800 million people live in hunger. Difficulties are mounting in food security, education, employment, medicine, health and other areas important to people’s livelihoods.” Not only have some developing countries fallen back into poverty and instability due to the pandemic; many in developed countries are also living through a hard time.

Fourth: That no solution can be reached for any of these problems, without discarding the “Cold War mentality” of dividing the world into blocs which polarize the world. “History has proved time and again that confrontation does not solve problems; it only invites catastrophic consequences.”

Xi focused on the dynamics of the current crisis in his opening:

“The world today is undergoing major changes unseen in a century. These changes, not limited to a particular moment, event, country or region, represent the profound and sweeping changes of our times. As changes of the times combine with the once-in-a-century pandemic, the world finds itself in a new period of turbulence and transformation. How to beat the pandemic and how to build the post-COVID world? These are major issues of common concern to people around the world. They are also major, urgent questions we must give answers to.

“As a Chinese saying goes, ‘The momentum of the world either flourishes or declines; the state of the world either progresses or regresses.’ The world is always developing through the movement of contradictions; without contradiction, nothing would exist. The history of humanity is a history of achieving growth by meeting various tests and of developing by overcoming various crises. We need to move forward by following the logic of historical progress, and develop by riding the tide of development of our times.

“Notwithstanding all vicissitudes, humanity will move on. We need to learn from comparing long history cycles, and see the change in things through the subtle and minute. We need to foster new opportunities amidst crises, open up new horizons on a shifting landscape, and pool great strength to go through difficulties and challenges….”

The full text of Xi’s speech is posted to the Foreign Ministry’s website and is available here.