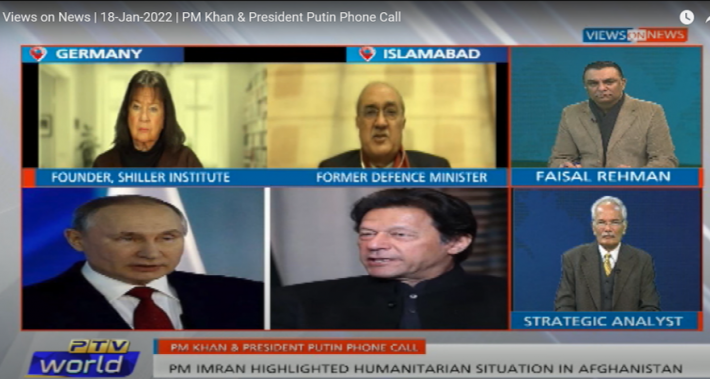 Jan. 18, 2022 (EIRNS)—Participating in a panel discussion on the Views on News program of Pakistan’s public broadcasting channel, PTV World, today, Schiller Institute founder and chairwoman Helga Zepp-LaRouche delivered a concise, hard-hitting, 10-minute briefing on how to win the global fight to defeat the military-industrial-Wall Street/City of London-complex’s unipolar war drive, using the urgency of saving Afghans from death as a fulcrum to build cooperation between the strategic powers, including the United States.

The subjects of the program were Vladimir Putin’s phone call yesterday with Pakistani Prime Minister Imran Khan, during which they discussed areas for cooperation, and how PM Khan had thanked Putin for his Dec. 23 remarks rejecting the Islamophobia so prevalent in the Western world today, and Putin’s specifically attacking the cartoon of the Prophet Mohammad. Self-satisfied Americans would do well to take note of the deep anger expressed by the moderator Faisal Rehman, and two other Pakistani participants against U.S. “brow-beating” of countries around the world, with sanctions, bans, military invasions, which led one even to argue that Russia, China, and Central Asian and many other nations of the world should have nothing to do with the United States, if they want to survive.

Zepp-LaRouche’s proposal of “Operation Ibn Sina”—to make the name of Ibn Sina (Avicenna, in the West), the great Islamic philosopher and physician, who discovered how quarantines can end epidemics, synonymous with the actions required to save Afghanistan—sparked real excitement in this emotional environment. Former Pakistani Defense Minister, retired Lt. Gen. Naeem Khalid Lodhi, who was another of the speakers on the panel, responded with enthusiasm as she outlined the idea, and then thanked her for refreshing their memories about this great person, and for the proposal to give the name of Ibn Sina to saving the Afghan people.  The entire Views on News program can be found here.