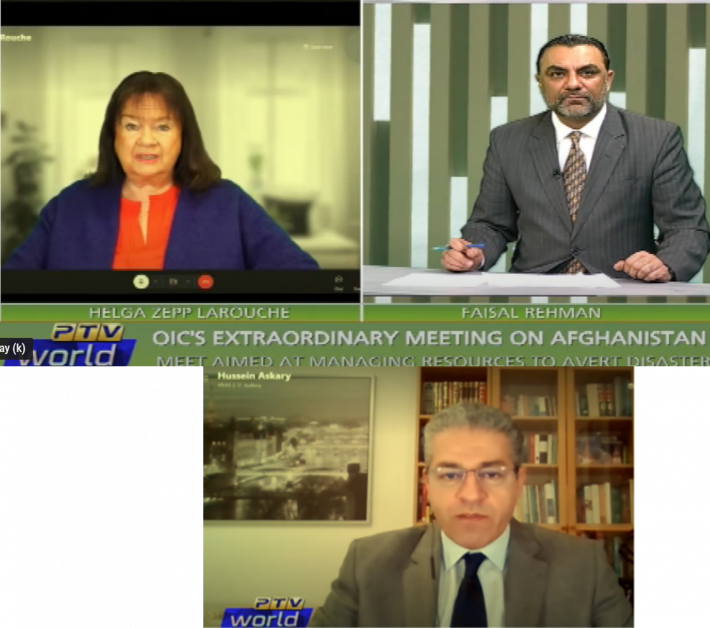 Dec. 17 (EIRNS)—Helga Zepp-LaRouche and Hussein Askary appeared on Pakistani PTV World today, commenting live on the meeting of the Organization of Islamic Cooperation (OIC) dedicated to Afghanistan. {A transcript of Mrs. Zepp-LaRouche and Askary’s remarks will be posted soon.}

In her intervention, Zepp-LaRouche praised Pakistan for hosting the OIC conference on Afghanistan, given the failure of the West to take responsibility for the enormous risk to life of millions of people in Afghanistan. The withholding of Afghanistan’s funds by Western banks is shameful. She promoted Operation Ibn Sina as a path forward in creating a health and development path forward for Afghanistan, and hoped that the OIC would incorporate it into its proposals.

The American-NATO defeat by the Taliban was a humiliating experience, but this does not end the responsibility to the well-being of the people of Afghanistan. The given reason for withholding funding is the Taliban’s mistreatment of women and children, but creating the conditions for mass starvation is essentially genocide, and this is what the economic blockade does. Withholding funds may also cause Afghanistan to turn to drug production, which the Taliban opposes. She appealed to the entire world to choose the side of humanity over barbarism.

Responding to another question about the discussion of Afghanistan and the OIC meeting in the West, Zepp-LaRouche emphasized the potential of the human impulse to do good could overcome geopolitics. As an example, she cited the coordination between India and Pakistan of Indian supplies going to Afghanistan via Pakistan. Another example is the collaboration of the Central Asian Republics with Russia and China. If the United States could be induced to make a positive contribution, this would be of absolute world historical importance in shifting the world paradigm: “I think the whole destiny of mankind is concentrated like a laser in what happens in Afghanistan.” It must become an issue of the whole world. Is humanity fit to survive? “In one sense, I think the fate of Afghanistan and the fate of humanity are more closely connected than most people can imagine.”

Askary praised Pakistan’s efforts to support the people of Afghanistan, both to release the billions of dollars held by American and European financial institutions and to end sanctions. Pakistan’s Foreign Minister Qureshi has made commendable efforts to these ends. The release of funds is essential, but more is required. The crisis in Afghanistan was not caused by the Taliban, but by twenty years of failures of Western military action. The current situation in Afghanistan will cause the rise of terrorism and of immigration, outcomes that Western nations supposedly oppose. The geopolitical game must be ended, replaced by the new paradigm exemplified by the Belt and Road Initiative. The immediate crisis must be addressed, but the way must be paved to the long-term solution provided by infrastructure, including health infrastructure. The Schiller Institute’s Operation Ibn Sina is a proposal that allows for international cooperation across the geopolitical divide to provide for the common well-being of the people of the world. This is the opportunity presented by the current crisis, an opportunity that must be fought for.

Askary explained that Afghanistan had fallen off the media in Scandinavia as well. Although there are many Nordic organizations pushing for humanitarian aid to Afghanistan, this receives scant coverage. But with the push among institutions to oppose China and Russia, there is little room to support useful efforts.

He emphasized that Muslim nations have been pitted against each other by British geopolitics, as happened in Libya, Syria, and Yemen. But, the age of geopolitics has ended with the failure in Afghanistan and a new paradigm beckons, based on economic cooperation. Muslim nations should join this new paradigm. He also spoke to the importance of India taking its rightful position as an Asian nation rather than an Atlanticist one, working with Pakistan and other neighbors of Afghanistan like China.

He closed by stressing that although narratives may appear to have a certain power, it is reality that ultimately has the upper hand. {The link to watch it is here.}