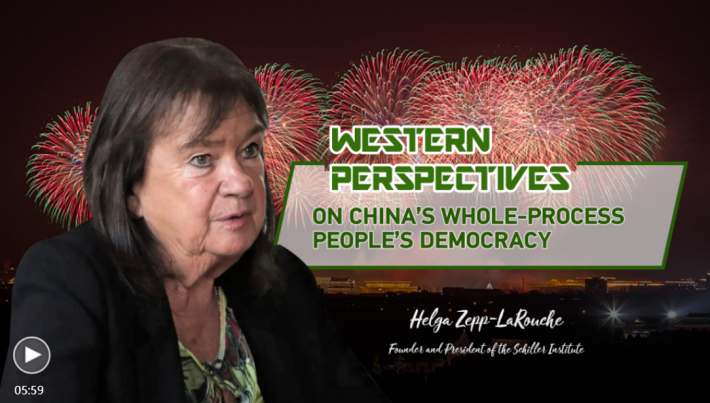 Nov. 3 (EIRNS) – CGTN yesterday published a six-minute video excerpt, with accompanying text, of an interview with international Schiller Institute founder Helga Zepp-LaRouche. The following is a copy-edited version of that CGTN transcript.

Editor’s note: The concept of “whole-process people’s democracy” was first put forward about two years ago during Chinese President Xi Jinping’s visit to a civic center in Shanghai. Since then, some Western media outlets have been attacking it for being hollow and misleading. Helga Zepp-LaRouche, founder and president of the Schiller Institute, shares her thoughts on the concept. The opinions expressed in the video are her own and not necessarily those of CGTN.

CGTN: Why does the Western media keep attacking the “whole-process people’s democracy”?

Zepp-LaRouche: My understanding of this “whole-process people’s democracy” is that it is an inner party democratic process whereby you identify, on the basis of meritocracy, which are the most qualified people for the job and who are the [best] servants to the common good. And I think there is an empirical proof that this method is truthful, because China was able to lift 850 million people out of extreme poverty. That is the greatest contribution to history I know of. But to lift so many people out of poverty and also to offer that to the developing countries is exactly what is the crime in the view of the Western people who attack China on this point, because China has overcome extreme poverty in its own country, and it is now helping developing countries to do likewise. This is exactly the same mindset which was the mindset of Malthus since the time of the British East India Company which, as you know, was behind the Opium Wars against China.

It is not because of what they say. It is because the Chinese model has upset the whole world order. Because you have offered for the first time to the developing countries the possibility to overcome poverty and underdevelopment, and they wanted to keep the colonial order. I think this is really the bottom line of the accusations against China. I’ve been in China many times, and my impression was always that the spirit of the people is extremely positive [and] optimistic [about] the future. Therefore, the CPC must be doing something very right. If you ask people in the West, most people are pessimistic about the future. So, I think that expresses, in my view, more truthfulness than any of the propagandistic lines in the mainstream media.

CGTN: How do you see Chinese democracy and Western democracy?

Zepp-LaRouche: Democracy sounds very nice, but in many cases, it is a label, and you had better look what is the content of the bottle on which the label is pasted. Because nowadays the different parties are mostly lobbying for different interests. I would like to read you another quote from George Washington’s “Farewell Address” as president of the United States in 1796, where he warned of the evil spirit of party in general.

He said, “The alternate domination of one faction over another, sharpened by the spirit of revenge, natural to party dissension, which in different ages and countries has perpetrated the most horrid enormities, is itself a frightful despotism. But this leads at length to a more formal and permanent despotism.”

I think that is what we are seeing right now in the West. In many countries, you don’t have real democracy, but you have [the] form of despotism like in the United States. The polarization between the Republicans and the Democrats has torn the country completely apart. In Germany, where you have now the effort to form a new coalition, the voters will not get as government what he or she voted for, because they form coalitions as they want.

There were periods, however, where the Western democracy did function. This was the case in the beginning of the American Revolution, and it was the case with the Fifth Republic of Charles de Gaulle. But unfortunately, we, in the West, have moved very far away from these more noble conceptions, so we are more in the system of despotism which George Washington warned about.

CGTN: Can China and the West maintain good and stable relations?

Zepp-LaRouche: I think that there are indeed different models of democracy, according to the specific tradition and culture. It is very possible for these different systems to cooperate. However, this will only function, if they are united by a higher one [that] must be in the interest of all of mankind. I think the model closest to that is what President Xi Jinping has proposed – a community with a shared future, because that includes this idea of humanity as a whole. There is in the West an idea which is very similar, or actually identical, and that is the philosophical idea of a thinker from the 15th century, Nicholas of Cusa, the coincidence of opposites, which is the idea that since human beings are the only species capable of creative reason, that we always can think the higher one, a level of unity where all the differences disappear. So I think we need to enter a dialogue why this concept of the coincidence of opposites and President Xi Jinping’s idea of [a community with a shared future] are one and the same idea. And once we agree on that, I think cooperation will be very easy.