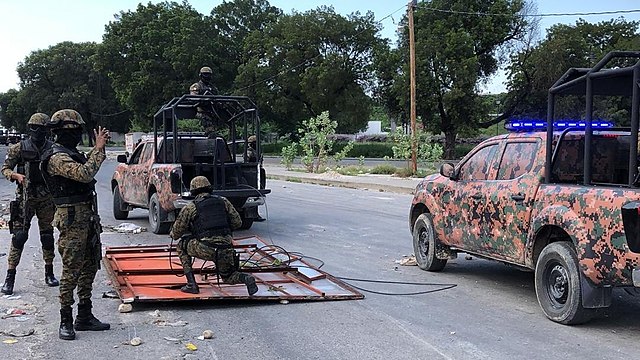 This was the headline in today’s edition of the Haitian online daily Haite Libre, describing the unbearable existence that citizens of Port-au-Prince and other cities face every day, because of the ongoing work stoppages and gang activity that have affected every aspect of human life. The armed gangs which make transportation by road of gasoline and diesel fuel impossible, also block trucks’ access to the main petroleum storage facility at Varreux, holding hostage 25,000 barrels of gasoline and 50,000 barrels of diesel fuel that should be going to gas stations, hospitals, communications companies, state water and electricity companies, etc. Yet, there is no functioning police force to deal with the gangs. As the Miami Herald’s veteran Haiti expert Jacqueline Charles pointed out in an Oct. 25 interview with Slate, the gangs are far better armed than the police and, as many observers have pointed out, act like a quasi-state, in the absence of a functioning state or functioning state institutions.

So today, most hospitals in Port-au-Prince are not open except for perhaps a skeleton crew of a few doctors and nurses or a couple of medical students. There is no fuel for the power plants that keep the generators going that provide electricity for operating rooms or oxygen tanks. At Haiti’s largest cancer treatment center, X-ray machines and other equipment lie idle—there is no power to run them. Hospital director Kedner Pierre told CNN’s Matt Rivers that refrigerators have been packed with ice to try to preserve some chemotherapy medicines. The National Ambulance Center can’t deploy ambulances, because there is no fuel. The nearby Hospital Universitaire de la Paix is turning away pretty much every patient because, aside from fuel shortages, there aren’t enough doctors or nurses on staff. Personnel can’t get to work, or sometimes sleep at the hospital, as kidnapping is a risk for anyone traveling on the streets. Rivers concludes, then, “that one of Haiti’s largest hospitals simply isn’t functioning.” This is the case at every healthcare facility in the capital..

But the damage doesn’t stop here. Fuel shortages are also affecting mobile telecommunications services whose antennas are powered by generators that can’t function without fuel. Digicel, Haiti’s largest mobile network, reports that 433 of its 1,500 antenna sites are not operational because there is no fuel for generators, Le Nouvelliste reports. The Haitian government department in charge of potable water and sanitation, DINEPA, warns of water shortages as it lacks the diesel fuel needed to keep operational its powerful generator that in turn supplies energy to the stations and pumps that supply drinking water. The state electric company, EDH, warns of blackouts. A former Haitian consul in the Dominican Republic, Edwin Paraison, who has lived in Santo Domingo since the 2010 earthquake, told Dominican TV yesterday that, obviously, Haiti needs the help of the international community to deal with the gangs and security situation. But, he warned, the solution must not be one imposed on Haiti by the international community, but rather the result of a dialogue between the international community and Haitian authorities and civil society to determine together a strategy to deal with the current untenable security situation.