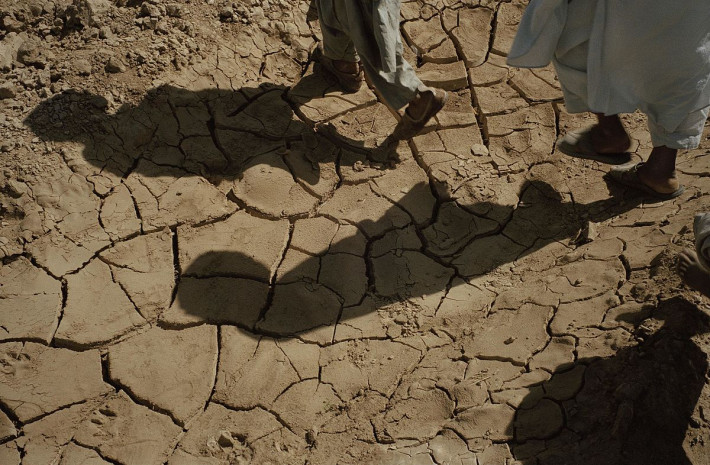 Oct. 25, 2021 (EIRNS)–Afghanistan’s collapse in physical economic and agricultural production, the implosion of its health system, as well as the threat to human life, has gotten worse over the last two months. The nationwide drought is intensifying, while the West applies a tourniquet to the flow of necessary funds.

Physical economic conditions never stay in a “metastable state;” they either get better or worse.

In June of this year, then-Afghan President Ashraf Ghani officially declared a drought in Afghanistan. This was based on information from several agencies, including the International Federation of Red Cross and Red Crescent Societies (IFRC), which declared that “80% of Afghanistan is exposed to serious drought”—30% to “severe drought,” and 50% to “serious drought,” comprising 80%—and the remaining 20% part of the country was exposed to “moderate drought.”

Richard Trenchard, the UN’s Food and Agricultural Organization director for Afghanistan, stated in late September, “This is the worst drought in 35–36 years. Many public institutions which provide a safety net, have ceased to function. Farmers have very little to fall back upon.”

Farming is being destroyed. The UN reported August 25, “Some 40 percent of [Afghanistan’s] crops have been lost to drought in the second massive water shortage in three years—further heightening food insecurity.” The World Food Program already reported that 14 million people in Afghanistan are food insecure, a number that is doubtless rising.

But the shortage of water is affecting not only agriculture, but the whole economy and society, which depends on water. A 2008 report reported “that drinking water supplies reach only 23 percent of Afghanistan’s total population… The country’s total sanitation coverage [is] only 12 percent.”

Two critical infrastructural sectors expose some of the crisis.

Afghanistan has only a combined approximately 100 private and public hospitals for a nation of 40 million people, a meager amount. The nation’s health system is run through a network of 2,200 “health facilities,” about 200 of which appear to be primary health clinics; it is not clear how large the other facilities are. These 2,200 facilities are run through an institution called Sehatmandi which is administered by the World Bank through the Afghanistan Reconstruction Fund and the Afghan Ministry of Public Health. It is funded through the World Bank, the European Union, Canada and Global Financing Facilities.

When the Taliban came to power in the period of August 17–18, these funding institutions cut off money. On September 30, Alexander Matheou, the Asia Pacific director of the International Federation of Red Cross and Red Crescent Societies stated that “over 2,000 health facilities have closed.” He added that more than 20,000 health workers in the country were no longer working or were working without being paid; more than 7,000 of them are women. “People might agree to work without salaries for a few more weeks,” Matheou stated. “But once medicines run out totally, if you can’t switch on the lights, if you’ve got nothing to offer somebody who comes to your clinic, then they’ll shut the doors.”

Under intense pressure, on September 20, the Global Fund and the United Nations Development Fund signed an agreement to supply $15 million to the 2,200 health facilities. This is a drop in the bucket.

International donors pledged in October $1.2 billion to Afghanistan. But there are three roadblocks: 1) it is not clear how much of the pledged money will be really delivered; 2) it takes sometimes months for the money to get into the system; and 3) above all, the clinics are greatly inadequate, Afghanistan needs hundreds of new advanced hospitals, tens of thousands of skilled doctors and nurses, and so forth.

In the meantime, COVID is looming. Nine of Afghanistan’s 37 COVID hospitals have closed. Afghanistan has put a reported only 2.2 million COVID jabs into people; it has 1.2 million doses of vaccine waiting to be distributed, that haven’t been. They will expire by the end of the year.

This is pure and simple genocide.

As for water, Afghanistan has an annual surface water runoff water volume of 57,000 million cubic meters per year, which comes out to approximately 1,425 cubic meters/year per capita. This is insufficient, but would be a start. However, Afghanistan does not have an adequate water basin catchment system, and precipitation is not evenly distributed geographically.

In 2016, India spent $275 million to complete what is now called the “Afghan-India Friendship Dam” in Herat province on the Hari River. It will irrigate 75,000 hectares of land. But otherwise, new dam construction and broader water management hardly exists.

The U.S. is blocking more than $9 billion in Afghanistan’s central bank that belong to the Afghan people. The World Bank, IMF, and EU are blocking hundreds of millions more. (See the Schiller Institute’s demand for release of the Afghans’ funds at this link.)

These more than $10 billion, were they deposited in a fund under sovereign Afghan control, could be used to build hospitals, administer the COVID-19 vaccine; begin emergency food and water distribution; make down payments on dams and water management projects; build power stations, etc. Immediate building in Afghanistan must start.