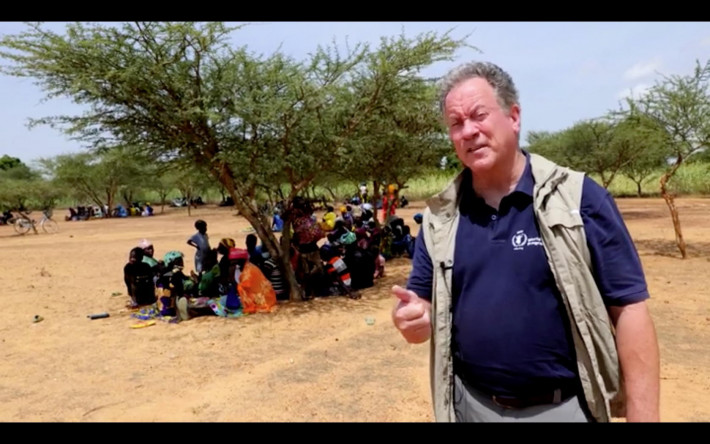 September 21, 2021by David Dobrodt in General

Sometimes, obscenity is most luridly displayed in the form of what is “hidden in plain view.” The normally unspoken premise, that the world’s population must be radically reduced “by any means necessary,” and with which many at the UN and its non-governmental organizations tacitly agree, was once openly expressed in 1991 in the words of Alexander King, in the Club of Rome’s “The First Global Revolution:”

“The common enemy of humanity is man. In searching for a new enemy to unite us, we came up with the idea that pollution, the threat of global warming, water shortages, famine and the like would fit the bill. All these dangers are caused by human intervention, and it is only through changed attitudes and behavior that they can be overcome. The real enemy then, is humanity itself.”

If fewer people is the unspoken goal, control of food production and supply is essential. Those self-selected “park rangers for the human race,” including Ubermenschen like 60-billion dollar Mike Bloomberg, UN Special Envoy on Climate Ambition and Solutions, and Mark Carney, 2019 Special Envoy on Climate Action and Finance and the former Governor of the Bank of England, believe that they can use “financial regime change” to corral many nations of Africa, Asia and Ibero-America into submission.

The “green elites” claim they possess superior knowledge about the planet, giving them the right to change the behavior of “inferior societies,” almost always located in the Southern hemisphere. Henry Kissinger, whose 1974 NSSM-200 report, “Implications of Worldwide Population Growth for U.S. Security and Overseas Interests, asked, “Would food be considered an instrument of national power? … Is the U.S. prepared to accept food rationing to help people who can’t/won’t control their population growth?” He would have applauded their answer.

Various globalist committees have assumed the responsibility to cleanse the planet of the unfit, the poor, infirm and inconvenient, who are now no longer even referred to as people– they are merely “carbon footprints.” The “green elect” must act, when the rest of humanity cannot, or will not.

In former times, this brutality was known by the term colonialism or neo-colonialism. Now, in the age of universal surveillance, it might be termed “cyber-colonialism,” or  “crypto-colonialism,” etc.   So, the intent to urgently rid the world of the “redundant, unwanted and unnecessary” people of Africa, South America and Asia, for example, is dressed up in the formal attire of “deep concern for the future of the planet,” and the need to “supervise backward nations, failed states and irresponsible environmental actors.” To clean up the dirty carbon footprint of the “great unwashed,” it may be necessary to place a friendly foot on their necks by using sanctions, including food as a weapon, “for the good of the Earth.”

Now the United Nations is about to host a set of meetings where well-fed bureaucrats will pretend concern, but stick with their food weaponry. Doing this in the midst of a pandemic, with the imminent starvation of up to a half billion persons, and of the ongoing disruption of national borders throughout the planet, is an obscene display of what in U.S. criminal law, is “depraved indifference.” Under the Nuremberg Tribunal code, “they knew, or should have known.”   Grandiose declarations about issuing billions of doses of vaccines will do no good if the people who are supposed to be inoculated are already dead from starvation, dehydration, or exposure. The question is, is that underlying de-population process the actual intent?

One must ask that question, considering the lack of response that David Beasley of the World Food Program has received, to his repeated  pleas regarding Afghanistan, Haiti, and other nations that are either on the verge, or in the throes of catastrophes which can, in fact, be either averted or alleviated. The idiocy of not providing the most vulnerable areas of the world with the most help possible, including at the onset of last year’s coronavirus pandemic. has already worsened the world’s condition for all of us in ways we do not have the information to yet know.

A world health platform–clean water, food, medicine and the correlate emergency infrastructure required for their delivery, is the minimum physical pre-condition needed for the durable survival of every nation on the planet, no matter what their politics. That is the only human response.  This is also now our only sure way to not only “keep pace,” but get out ahead of the impending biological holocaust that mankind faces.

Economist Lyndon LaRouche’s May 7, 1985 essay, “The Role of Economic Science in Projecting Pandemics as a Feature of Advanced Stages of Economic Breakdown,” published in a Special Report issued by Executive Intelligence Review entitled Economic Breakdown and the Threat of Global Pandemics was distributed throughout the United Nations and to many other institutions a full 36 years ago. The emergency medical circumstances of 2020-21, therefore, does not “catch us by surprise.” Those from the UN and their respective governments were informed back at the time; they chose not to act. They were then guilty of depraved indifference, of malignant neglect.

Mobilize the Food, The Farmers Know How

Today, the challenge is: Can the United Nations–can you–do any better? There is an immediate, life-saving test. Today, the world must drop everything–as it was caused to drop everything last year, when the pandemic erupted–and do what is necessary to feed, on an emergency basis, everyone on the planet that is presently food insecure, in every country on Earth. This takes a principled, anti-Malthusian act, but it also protects even the selfish on the planet from dying of unknown as well as known infections, suddenly imported and contracted from unknown sources. This effort requires use of most, if not all technological-productive capabilities available, agricultural and industrial.  This must be done in the service of humanity, and not a company, cartel, military establishment, or oligarchy intent on using food as a weapon. And collaborating on this food mobilization is the first step to establishing the cooperation required for a world health platform to successfully function.

People are not responsible for the pandemic, earthquakes, or floods. They are not starving as a result of a specific crime–unless one thinks, as do the Malthusians, that “the crime was their being born.” The crime, rather, is holding conferences about “nature-based solutions to food production” and “world hunger summits,” as you ignore the death all around you.
The world’s farmers, food aid distributors, and people are ready to accept the monumental task of an immediate, emergency feeding of all humanity. The place to begin is Afghanistan. It is an exemplary situation in which many nations once opposed to each other can in the words of Isaiah, “beat their swords into plowshares, and their spears into pruning hooks: nation shall not lift up sword against nation, neither shall they learn war any more.” If you feed the people, you suppress the appetite for war. We need, not a “Great Reset,” but a “Great Reversal” of policy, including food policy. We need a worldwide anti-Malthusian resistance. People come first! Join the Schiller Institute Committee for a Coincidence of Opposites in its campaign for a World Health Platform.