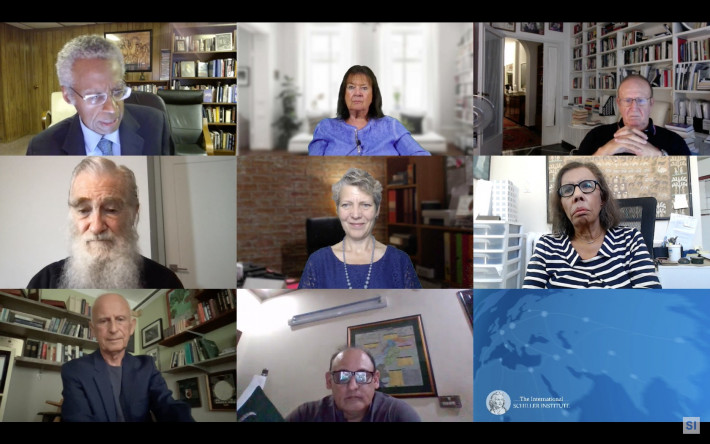 Aug. 21 (EIRNS)–The Schiller Institute hosted an international webinar today, “Now, More Urgent Than Ever: Afghanistan—Opportunity for a New Epoch for Mankind,’ bringing together speakers with wide experience, from six nations—United States, Germany, Pakistan, Canada, and Italy. Three main themes were struck repeatedly in the dialogue: Toss out the “endless wars” paradigm completely, talk to the new Afghan government-in-the-making, and get economic projects going.

“Push for quick economic development,” was the advice by Helga Zepp-LaRouche in her opening remarks. Saying that what’s happened in Afghanistan marks “the end of a system,” maybe not as big as the fall of the Wall and the end of the Soviet Union, but as portentous. There has been a deep-seated problem of conducting never-ending wars, and geopolitical games. This must stop, and it goes beyond Afghanistan as such. She stressed also that, “It is high time to change the axiomatic assumptions about Russia and China.”

Besides Zepp LaRouche on the panel, there were Lt. Col. (ret.) Ulrich Scholz (Germany), a military and philosophy expert; Pino Arlacchi (Italy), former head of the UN Office for Drug Control (1997-2002), now professor at Sassari University; Hassan Daud Butt (Pakistan), CEO, Khyber Pakhtunkhwa Province Board of Investment; Ray McGovern (U.S.) former CIA Analyst and co-founder of the VIPS (Veteran Intelligence Professionals for Sanity), and Nipa Banerjee (Canada), Professor at the University of Ottawa. A question was taken up from Khalid Lattif, Director of an institute in Pakistan.

The co-moderators of today’s event, Dennis Speed and Diane Sare, pointed out that today’s discussion is a continuation of the dialogue of the July 31 Schiller Institute event, “Afghanistan: A Turning Point in History After the Failed Regime-Change Era,” and several of the same individuals are involved. Sare noted the importance of the Schiller Institute in restoring the dialogue process, saying that, “people are losing the ability to have a dialogue” these days. Instead, we have ideological hysteria, as seen right now, with the fixation on accusations and blame over the logistics of the Kabul evacuation process, with no vision for the people and the future.

Within two weeks of the Schiller Institute’s July 31 event, presenting a development perspective for Afghanistan and the region, the 20 year U.N./NATO military action came to an end. The Taliban took over Kabul. Today there were meetings in Kabul among Taliban political director Abdul Ghani Baradar, former Afghanistan President Hamid Karzai, Afghan High Council for National Reconciliation head Abdullah Abdullah, and others toward an eventual formation of a government, to be announced some time shortly after August 31, when the evacuation period concludes.

What we don’t need now, said Arlacchi, is “Talibanology”—speculating on their intentions and hypotheticals. Many others agreed, making the point that the intentions to be focused upon, are those of the major powers: What do the U.S. and the European Union intend to do? Will they, for example, work together with other major powers of Russia, China, and India as well as immediate neighbors of Afghanistan—Iran and Pakistan, and the Central Asian nations to the north, on humanitarian aid and economic initiatives? One in three of the 39 million people in Afghanistan are food insecure. There are dozens of thousands of dislocated people, and thousands fleeing the nation. All this, with the COVID-19 pandemic continuing.

Arlacchi reported his own past experience on a wool factory project in Kandahar Province, involving successful negotiations with the Taliban governor. In the July 31 dialogue, Arlacchi reported on the success in nearly eradicating all opium poppy cultivation over the period 1998 to 2000, through his UN program, in conjunction with the Taliban. Opium production then roared back after the U.S./NATO 2001 invasion. Arlacchi said emphatically today, “We should start to make plans on narcotics elimination” right now.

On the question of accountability of the Taliban new government and projects, Ray McGovern raised the point that you can and should have a truthful monitoring process, which could come, for example from the United Nations. He raised the specific example of how the Special Inspector General for Afghan Reconstruction (SIGAR), set up by the U.S. Congress some years back, actually kept truthful accounts on what the U.S. and NATO were doing in Afghanistan, which documented that U.S. officials were lying about progress there all along. Prof. Banerjee strongly agreed on this point. These Inspector General documents were published in 2019 by the Washington Post, described by McGovern as “the one useful thing done by the Washington Post in the last 20 years.” Principal author Craig Whitlock, has just released his new book, titled, “The Afghanistan Papers; a Secret History of the War.”

The features of economic development for the region were summarized today by Daud, whose province in Pakistan borders Afghanistan, which has “national endowments, minerals, water, hard working people.” He stressed that, “when the Afghanistan government is strong and stable, it can reach out to China,” and work with the Belt and Road Initiative, and the Shanghai Cooperation Organization, in which it already has observer status. It can become “a crossroads of the region.”

In the past, this very region was referred to as a “land of 1000 cities,” Zepp-LaRouche stated in concluding the discussion. The idea of the New Silk Road is again to create conditions for hundreds and thousands of new cities—science centers of all kinds. The old paradigm is crashing down, not just in Afghanistan. War can no longer be a means of solving problems.